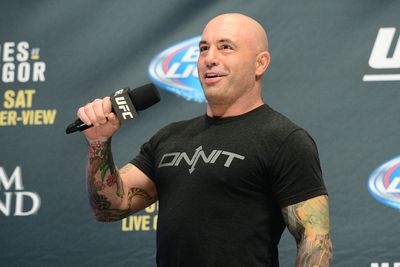 The next time Joe Rogan is in Los Angeles, Calif., he might want to watch his back.

That’s because Cristiane Santos, otherwise known as “Cyborg,” recently declared (via MMA Digest) she would like to meet up and teach him a lesson, “Brazilian Style,” for his recent “dick” joke.

The longtime Ultimate Fighting Championship (UFC) commentator — as well as fellow comedian and friend, Tony Hinchcliffe — caught the ire of the current Invicta FC featherweight champion during a recent edition of “The Joe Rogan Experience” podcast after they suggested she had a penis.

Read all about it here.

That prompted her to call the duo — as well as UFC president Dana White — a bunch of bullies for having a laugh at her expense.

Rogan has yet to comment on the issue, but Tony didn’t have a problem going to-to-toe with Cris on Twitter. But, would he take the challenge of going one-one-one inside the cage with “Cyborg?”