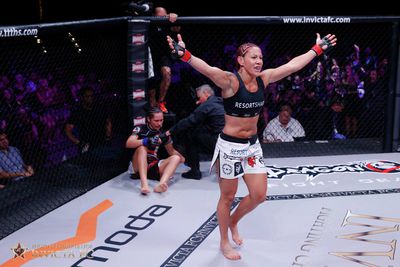 There’s a new weight class for Cris Cyborg’s fight next month. And a new opponent, too.

Cyborg will defend her featherweight title against Daria Ibragimova in the main event of Invicta FC 15 on Jan. 16 in Costa Mesa, Calif., sources told MMA Fighting. Cindy Dandois was initially the opponent and the bout was going to be a 140-pound catchweight. Invicta officials confirmed the change Monday morning.

Things have been shaken up since Invicta president Shannon Knapp announced the card two weeks ago on The MMA Hour. The aftermath of Holly Holm’s win over Ronda Rousey changed Cyborg’s plans of moving down to bantamweight in the near future. On Inside MMA on Friday, Knapp said Cyborg would be defending her 145-pound belt at Invicta 15.

Also changing will be the opponent. Dandois tweeted Sunday night that she’ll be trying out for the next season of The Ultimate Fighter at 135 pounds. Ibragimova was tabbed as the replacement last week.

Ibragimova (9-1), a native of Russia, has won seven straight fights, all by finish. Her lost loss, coincidentally, came against Dandois five years ago for M-1. Ibragimova, 31, a hard-nosed submission specialist, last fought for the Fight Nights ….View original article