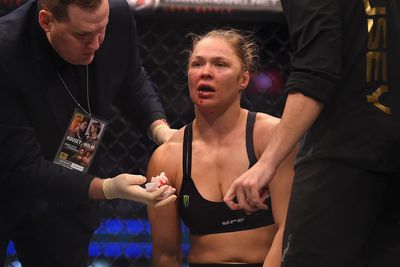 Lost in the aftermath of UFC 193, which took place last November in Melbourne, Australia, is what happened to the people in and around the “Rowdy” bubble. A bubble that was burst with a second-round head kick by new women’s bantamweight champion Holly Holm.

The prevailing narrative following last month’s upset may depend on your allegiance to Team Rousey. Fans have stood behind the Olympian as she burns under the same limelight that made her famous, while haters continue to dance on her fallen star.

Her sister, Maria Burns Ortiz, has her own take:

Then there was Australia, where we expected Ronda to win. Just like we always do. Just like we always will. But she didn’t. I haven’t rewatched it. I haven’t read about it. I won’t. I don’t see a point in reliving the moment when a part of my loved one died, when I saw someone I cared about have her soul crushed. I saw how horrible people can be to someone they don’t even know, which made me even more appreciative when I saw how wonderfully Ronda’s friends and family treated her. Those are the people that matter.

The world watched Ronda fall, but I have had the opportunity to watch her get back up. To be proud of her and happy for her when she wins, and to be proud of her and concerned for her when she loses. To tell her that I loved her just as much in the moments after the fight as I had in the moments before. To put my arm around her and try to protect her. To push aside the negativity. To help her get back up. Not just in the past few weeks but in the past ….View full article