Home MMA News Dada 5000’s Heart Stopped, and He Was Hospitalized Due to Severe Dehydration
ShareTweet 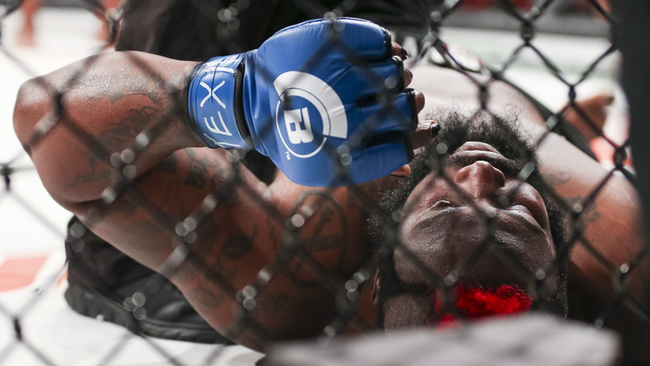 By way of a last-second changeup, Dhafir Harris, aka Dada 5000, went into last night’s fight against Kevin Ferguson, aka Kimbo Slice, as a slight favorite. Harris, a 38-year-old power-puncher born in the Bahamas had a few years of youth on Ferguson, 42, but that wasn’t enough to keep Ferguson from defying the odds, knocking Harris out in the third round.

But it was less of a knock-out than a full-on collapse. According to reports, Harris was taken out of the ring on a stretcher after his heart stopped, and was later treated for severe dehydration and renal failure.

BREAKING: Multiple sources confirm Dhafir Harris was in critical condition overnight. His heart stopped and he was placed on a ventilator.
— Jeremy Botter (@jeremybotter) February 20, 2016

Here is the statement from the family of Dhafir Harris. pic.twitter.com/c4oCUI0YCs
— Jeremy Botter (@jeremybotter) February 20, 2016

Harris’s family claim that doctors told them that his potassium levels jumped high enough to endanger him, due to the fact that he lost 40 pounds in such a short amount of time. But after a scary evening, Harris’s family report that he is currently in stable condition.