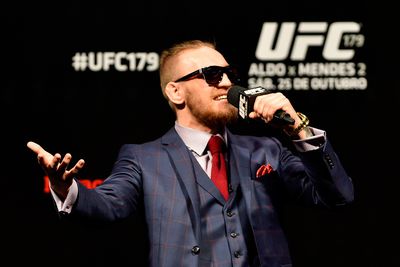 “It’s too early to tell if Conor is one of the greatest fighters ever, though we’re getting close [to being able to tell]. A win over Jose Aldo would get him going in the right direction, obviously. But I can tell you this, without reservation: He is the greatest mental warfare fighter I have ever met. Ever. The best. He doesn’t just fuck with the guys he’s going to fight. He fucks with everybody. I know it’s sacrilege to compare anybody to Muhammad Ali in anything in the fight business. You don’t ever want to be comparing people to Muhammad Ali, but he’s the only one who comes to mind when it comes to the mental warfare that Conor wages.”

Chalk that up as the second comparison (here’s the first) now made to Muhammad Ali by Ultimate Fighting Championship (UFC) brass on behalf of boisterous Irishman and interim Featherweight titleholder Conor McGregor, who they maintain is just as good as the greatest boxer of all-time at the mental side of the combat sports game.