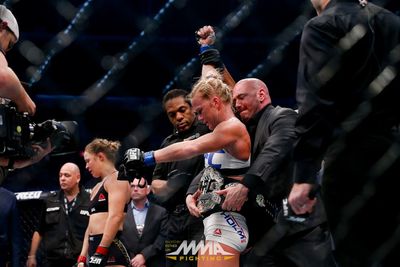 “Preacher’s Daughter” handed Rousey her first-ever career defeat in easily the biggest upset in the history of the mixed martial arts (MMA) promotion to remain undefeated and notch her third straight fight inside the Octagon.

The main event was awarded “Fight of the Night” honors, and UFC president Dana White was asked about the possibility of a rematch at the post-fight press conference (watch video replay here).

“I mean, obviously we don’t make fights the night of the fight, but the rematch makes a lot of sense,” he said. “The rematch is what people would want to see. It changes a lot of things now. The Cyborg fight … some other stuff we were working on.”

White has seen his share of upsets over the years: Matt Serra defeating Georges St-Pierre and Chris ….View original article