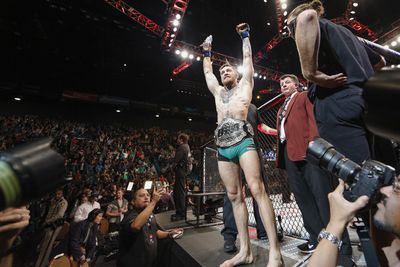 Conor McGregor raises the stakes every time he talks. Every time he bashes an opponent, calls them slow or basic or stuck in the mud, McGregor increases his own margin for error.

We’ve seen first-hand how fans react to UFC fighters who talk a lot and can’t back it up. Exhibit A is Ronda Rousey after her loss to Holly Holm last month in Australia.

McGregor, though, talks as much crap as anyone in UFC history. And backs it all up without batting an eyelash.

“Conor McGregor is a very unique individual,” UFC president Dana White said on the UFC 194 post-fight show on Fox Sports 1. “He eats pressure for breakfast. He eats pressure like nobody I’ve ever seen in my life. He rolled out there tonight smiling. The whole time, he was in the Octagon while Jose was walking out, he was yelling out to people outside the cage. He was in there doing this thing, warming up. He’s like, ‘Eh I’m in the gym and it’s just another day.'”

Some might say the pressure of being a megastar got to Rousey. It didn’t seem to faze McGregor one bit, albeit he is not quite the international celebrity Rousey has become.

McGregor knocked Jose Aldo out cold in the UFC 194 main event Saturday night in Las Vegas. That’s the same Aldo who had not lost in 10 years, was regarded as one of the top two best pound-for-pound fighters in the world and was the most fearsome featherweight fighter the sport had ever known. McGregor made quick work of him in 13 seconds.