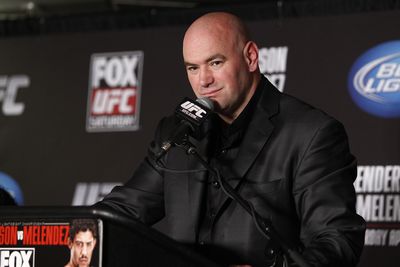 Dana White commented on the Vitor Belfort sketchy drug test in 2012 for the first time Thursday.

Deadspin reported in September that Belfort had high levels of testosterone before a fight with Jon Jones at UFC 152 in September 2013 and the UFC knew about it, letting the fight go on anyway.

Jones accused the UFC of having knowledge about Belfort’s alleged performance-enhancing drug use in an interview last week with MMA Fighting’s Ariel Helwani.

White denied those allegations on “Off The Record” with Michael Landsberg on Thursday. Landsberg asked White if Jones’ claim that the UFC knew about Belfort’s steroid use was true.

“No,” White said. “We didn’t know that. Was Jon Jones in our offices? Listen, Jon Jones is somebody who shouldn’t be talking about other people’s tests and what they’re doing.”

Jones failed an out-of-competition drug test for cocaine metabolites back in January and the Nevada Athletic Commission released the results. However, the former UFC light heavyweight champion should not have been tested for recreational drugs at that time, since they are not prohibited out of competition.

In the interview with Helwani, Jones said he it was a “slap in the face” that, in his view, the ….View original article