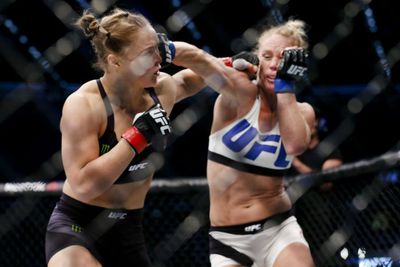 Saturday night offered up one of the biggest upsets in mixed martial arts history when Holly Holm stopped Ronda Rousey with a blistering head kick and series of hammerfists to become the UFC women’s bantamweight champion. The ending came at :59 of the second round, but it served the climactic ending to fight where Rousey was dominated throughout. The Olympic judoka had next to no answers for Holm’s defensive movements, counters and overall striking prowess and was being slowly punished from the opening bell.

Rousey, in fact, applied constant pressure throughout the bout’s duration, allowing Holm the time to prepare her counterstrikes or find her exit from attacks. This lead some on social media to ask: What was Rousey thinking with such a predictable gameplan?

According to UFC President Dana White, asking that is unfair and ultimately, pointless.

“If Ronda went out there and ran after [Holm] like a maniac and knocked her out? ‘Ronda’s the best ever. Ronda’s ….View original article