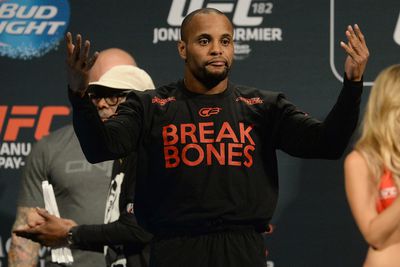 What, were you expecting him to run and hide?

Ultimate Fighting Championship (UFC) light heavyweight champion Daniel Cormier lost to Jon Jones at UFC 182, but still ended up with the 205-pound strap when “Bones” was submitted by Johnny Law back in April. Of course, “DC” did have to beat two very tough opponents in the process.

Not that it helped his case in the real/fake debate.

But now the Olympian has a chance to avenge his loss to Jones and prove once and for all that he’s more than just a commercial break in the Jones drama. To that end, “DC” praised his longtime rival on Facebook and declared it a “good day” for MMA fans.

Congrats to Jon “Bones” Jones on his reinstatement to the UFC. For MMA fans this is a good day. A guy that has shown to be one of the greatest fighters of all time is back. As a competitor there could be no other outcome and this is the best news I’ve heard in a long time. Jon has said the right things and his actions are backing his words up. We all hope this is the last time we have to deal ….View original article