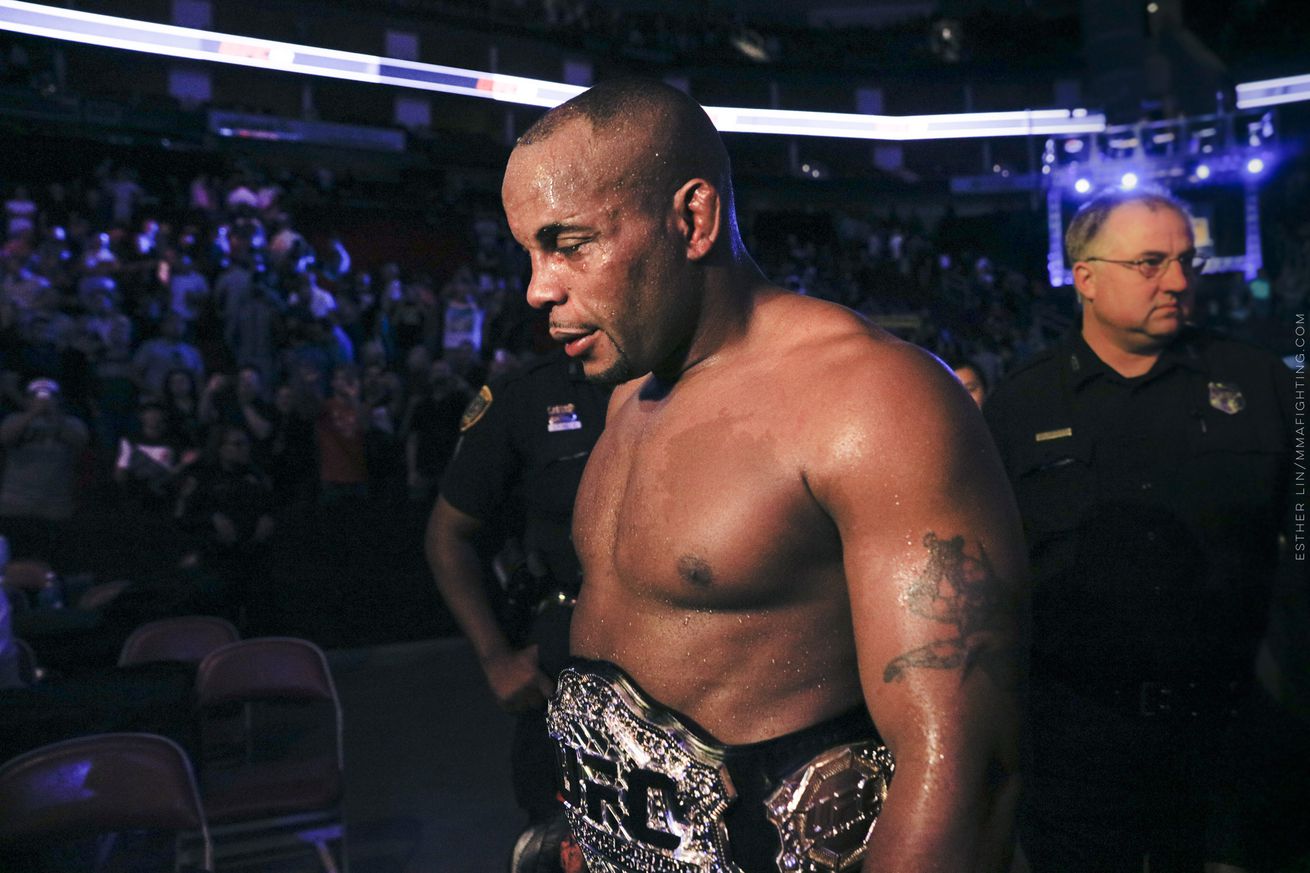 Just as Daniel Cormier thought the Jon Jones chapter of his career was coming to a close, he found himself sucked back into the nightmare last week. In the midst of Mayweather vs. McGregor mania, news broke that Jones tested positive for the anabolic steroid Turinabol in a pre-fight drug screening administered the day before Cormier suffered a dramatic defeat at the hands of Jones at UFC 214.

“It takes time to get through something like [UFC 214],” Cormier said Monday, speaking publicly on The MMA Hour for the first time since the news broke. “I’ve experienced it. I’ve experienced it at a high level with the Olympics and the Jones fights and the NCAA finals. It takes time to get over these things, and when you start to come around, the last thing you want to do is be sucked back into the situation that you’re trying to overcome. So it was tough. It took a day. I felt sick.

“We got to Disney Aulani (on vacation) and it was time to check in, and I had to go to my room and lay down, just because my head was spinning. Because you just don’t really know how to take news like that.”

Cormier said he was in Hawaii on vacation when UFC president Dana White first told him of Jones’ potential testing failure, and the exchange was a bizarrely familiar one. Just a year earlier, ahead of Cormier’s planned rematch against Jones at UFC 200, White and “DC” had a similar conversation when Jones tested positive for two banned substances, clomiphene and letrozol, prior to the planned July 2016 rematch between the two light heavyweights.

Jones ultimately blamed his UFC 200 failed test on a tainted sexual performance enhancement pill, and Jones’ agent, Malki Kawa, indicated last week that Team Jones is holding the same suspicions for Jones’ UFC 214 test, believing it to be the result of “another tainted supplement.”

Frankly, after everything Jones has put him through over the last several years, Cormier doesn’t know what to believe.

“I’ve been in the USADA testing pool since 2001. That was when I first started to get tested by USADA, my first U.S. national team,” Cormier said.

“There wasn’t USADA when I first started MMA, but 2001 to ‘09, and then … USADA got [to the UFC] in ’15, so it’s been about nine years that I’ve been in this program. And all of this time that I was in the USADA program, I was actually taking supplements, and I never actually had anything like that happen. So I just don’t understand how something like that could happen, especially back-to-back.

“And I really want to be careful with how I answer these questions, because Jon is entitled to the process of what’s going to happen with his other tests. But I think in the last case (before UFC 200), they said he was reckless, so they gave him a year (suspension). How could you be reckless again going into another fight? It’s so odd. So for me, it’s very concerning, because it seems as though in the last two fights that him and I were supposed to fight, that something like that happens. And I don’t want to be sour grapes. That’s why it’s hard to answer the question — he won the fight. But it just makes it very odd.”

In a seemingly career-defining fight, Cormier lost a back-and-forth battle to Jones at UFC 214, suffering a third-round knockout after eating a nasty head kick delivered by Jones. The violent result brought an end to Cormier’s two-year reign as UFC light heavyweight champion and appeared to relegate the 38-year-old to a place forever behind Jones in the history books. But now things are even more muddled than ever before, and Cormier can’t help but wonder why things played out the way they did.

“I’ll tell you, I’m upset, I was upset, I was very upset, but my coaches were upset,” Cormier said. “They were very, very upset, because they saw the work that we put into this, and it’s hard for me. I mean, if he did do something illegal — imagine if I did that at 38? To be able to wake up and not feel like I can’t walk down the stairs every morning? So that would really suck, and it’s pissed off my coaches, because those guys know the work that I put into that fight.”

For now, Cormier expects to remain in limbo until Jones’ case can be resolved by USADA — a timetable which may stretch into 2018. If Jones is found guilty, he could face a suspension stretching upwards of four years and Cormier would ostensibly be crowned UFC champion once more.

And if that’s the case, through no fault of his own, Cormier’s legacy would forever be entwined with that of Jones in the most unjust possible way.

“I think that’s what’s probably the worst part of it: ‘again,’” Cormier said. “That’s the problem. ‘Again.’ We’ve gone in these nasty circles time and time again, and just when you think that we were going to head off in different directions for awhile — because if I was to hope to get another fight against him, it was going to take some time and a big win, so I kinda figured we were heading in a different direction. And since the fight ended, every conversation that I had with my management, with my coaches, was ‘how do we find a way to do this again?’ And Bob Cook was like, ‘I think the Jon Jones story is over.’ He said, ‘but we can be creative, if that’s what you really what.’ So I go, ‘how do we get it done?’ And that’s all we’ve thought about in terms of the fight aspect of it, but to hear something like this, something again that has nothing to do with me, it’s very frustrating.

“Again, my whole issue is just, I don’t understand how in these situations you could put yourself in — he’s in trouble, man. I mean, I’ve got to be honest with you, I think he’s in a ton of trouble now based of this thing coming back positive at all. And again, I’ve been in this program for a long time.

“For a steroid, especially a performance enhancer, especially if it is what they’re saying that it was, it’s going to be very difficult for this thing to be any different, I think. So I think he’s in a lot of trouble, and that’s sad, because the guy is very talented,” Cormier continued.

“You know what’s sad? I really don’t believe he ever needed to do anything wrong. And you see a lot of people just flat-out saying he cheated. I’ve seen Chael (Sonnen) and I’ve seen a lot guys, and obviously they’re not in the position that I’m in in regards to him and our fight, but he really didn’t need to do any of that stuff. And I think if he was doing that as long as I was saying he was doing it, I think it became just a comfort thing. That’s probably why he did it again. It sucks.”