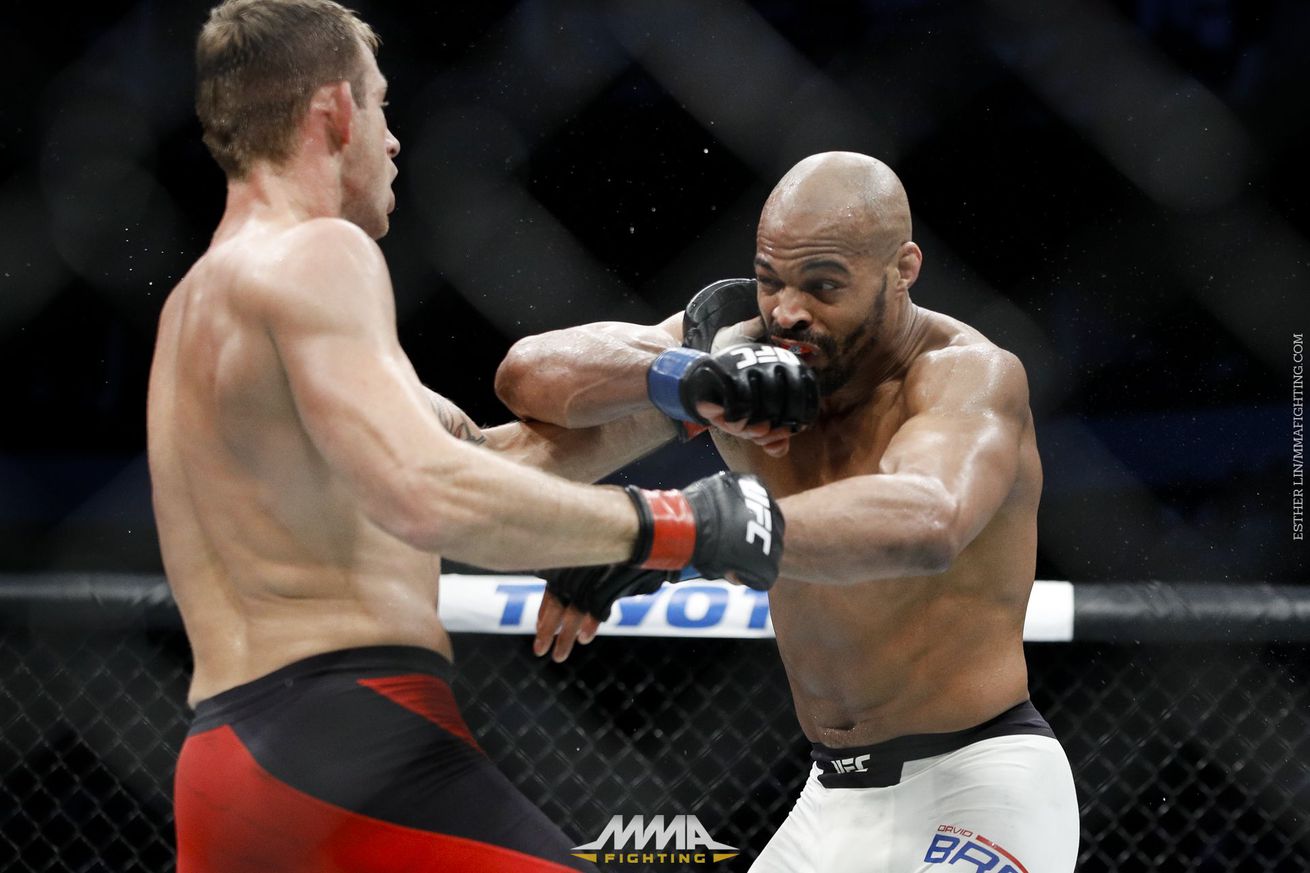 Headlining a UFC card for the first time, David Branch is warning everyone watching to expect the unexpected.

With the majority of his 21 career victories coming by way of decision, the former World Series of Fighting middleweight and light heavyweight champion hasn’t always been known for bringing a high-octane approach to the cage, but he’ll tell you that his conservative style is a matter of choice and not limitations.

Branch steps up to the plate against former UFC middleweight champion Luke Rockhold in the main event of UFC Pittsburgh this Saturday, and now that he’s being recognized — and compensated — as one of the best in his division, he’s done holding back.

“I look at it like this. If there’s more for me at the top, I’ve always reserved myself to a certain point in my career,” Branch said on Monday’s episode of The MMA Hour. “I’ve had 25 fights, I’m going on 11 years fighting MMA. I feel like a lot of fighters, they put so much of themselves in there and take so much punishment earlier on in their careers that when they get to the championship level or their championship run where it’s time to really start making that bread, their bodies can’t take it no more, their brain can’t take it no more, they’ve got a bunch of scar tissue.

“I haven’t suffered that kind of damage because I’ve always been careful. Now that I’m on this championship run, now I can go in there and be a f*cking fool. I’m gonna have fun on Saturday because I’ve been able to preserve myself all this time for 24 fights leading up to this one. So now, because this one means something and this is a money fight and this means more money, now I can go out there and act a goddam fool.”

This is Branch’s second stint competing inside the Octagon, and he’s built on his undefeated WSOF run to attain a higher spot on the UFC roster than he had in the past. The 35-year-old Renzo Gracie disciple has won 11 straight fights, 10 in the WSOF promotion that included six title bout victories between two divisions, and another win at UFC 211 this past May where he defeated streaking middleweight Krzysztof Jotko by split decision.

His gaudy record has earned him a shot at Rockhold, who is fighting for the first time since losing his UFC title to Michael Bisping last June. Rockhold had actually moved his training camp from San Jose to Florida to prepare for Saturday’s fight, and Branch was relieved to hear that his opponent was able to escape the wrath of Hurricane Irma.

After all, he wants everyone to know that it’s a fully prepared Rockhold he’s going up against.

“I knew that they were able to get him and a few of those guys that are fighting on that card out of Florida in time and I’m glad because that was my only concern,” Branch said. “I just wanted to make sure that he was nice and safe and that he doesn’t have any injuries. I don’t want to hear any excuses from this kid after I do what I do to him. Because it’s not personal, it’s just business.

“I don’t want to hear, ‘I took too much of this,’ or ‘it wasn’t enough of this,’ or ‘I didn’t take him serious, I didn’t do this.’ I’m letting him know that I’m a dangerous motherf*cker to get in there with, so please take me serious and when you go in there give me your A-game. I want you to fight the best and the hardest that you can fight. I want you to kick at me and punch at me the hardest that you can. I want you to pull your A-game out in wrestling, submissions, whatever you’ve got to do, I want you to do the best of it and do the most of it because I don’t want to hear no excuses.”

Branch stopped short of declaring himself the next man in line for a middleweight title shot should he beat Rockhold, but he’s guaranteeing that he’ll put on an impressive performance that will force the UFC to put him at the top of the contenders’ rankings.

“I don’t like to think too far down the road, but the way that I want to win this fight and the way that I intend to win this fight, I think that there should be no doubt about it,” Branch said. “Because Luke was the former UFC middleweight champion. Everybody’s been saying for years, how would Branch do in the UFC? How would he do? … Okay, I won in the UFC against a top-10 guy (Jotko), that’s to answer everybody’s question.

“But now everybody is like, ‘Okay he won, but how is he going to do against an elite guy?’ What about that? Now this guy was a former champion? What the f**k else? This is a tough kid, that’s why I wanted to fight him. When I heard that I had the opportunity to fight him, I was like, ‘Hell motherf**king yes. Hell yes.’ This is the kind of fight that I f**king want to do right here and I’m going to be able to get it on, I’m going to be able to rumble with this kid because he’s going to want to bring it, and I’m going to bring it. And that’s the kind of fight that I know that he can’t beat me in.”