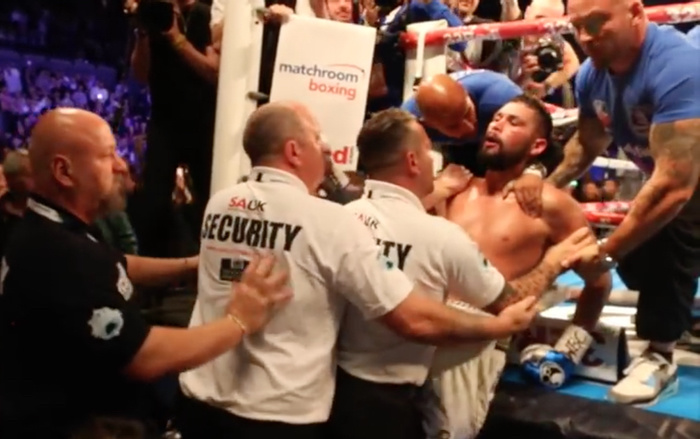 Grudge matches are the lifeblood of fight sports. When two opponents have a clear mutual dislike for one another, pre-fight heat almost always provides that extra gravitas to a contest to help draw in the casual fan and boost pay-per-view figures—thus earning fighters and promoters even more cash.

This is prizefighting after all. However, sometimes rivalries can feel a tad manufactured—an aspect of the grudge match that can taint its allure when fighters are deemed to have been outright following the professional wrestling playbook.

It was announced over the last few days that David Haye will be welcoming Tony Bellew to the heavyweight division for a brief cameo appearance to settle their feud—one which has seemingly appeared from nowhere.

To be held at London’s O2 Arena on March 4th, this fight is borne out of Bellew’s cruiserweight world title defence in October. Having just stopped BJ Flores inside three rounds—the first defence of his inaugural reign as a world champion after stopping Ilunga Makabu—Bellew made a beeline to where Haye was innocuously standing at ringside to get in his face.

It was a bizarre episode from Bellew, who later provided “context” behind his outburst in his post-fight interview. The Liverpudlian was clearly perturbed at Haye picking Flores to be the victor at Liverpool’s Echo Arena that night, while he also claimed the Londoner was “conning the public” since making his comeback—citing the poor standard of Haye’s first two opponents since returning from his three-year hiatus.

Haye and Bellew used to train together and there were never any rumblings of a brewing rivalry with Haye moving up from cruiserweight to heavyweight, with Bellew spending the bulk of his career as a light heavyweight. As little as 11 months ago, Bellew said he had “all the respect in the world for David Haye,” following his win over Mateusz Masternak for the European title.

Alleged details of those sparring sessions from years back were mentioned by Bellew—a big taboo in the world of combat sports—which led Haye’s trainer Shane McGuigan to say: “He [Bellew] has taken a lot out of one sparring session that happened when I wasn’t even around. I think David had done a handful of rounds with David Price and he got in and just using him for speed work, didn’t really throw much and Bellew took a lot from it. He literally just used him as a tech spar at the end and Bellew got all excited about it.”

This all sounds too convenient for a fight that makes little sense for a lot of cents. Haye’s apparent new-found dislike of Bellew is understandable given the one-sided assault on his career and character. But, even so, his bemusement at this fight is clear in what he had to say when the contest was officially confirmed.

“The public demand for me to violently knockout Tony ‘The Bell-End’ Bellew was simply too strong. The country is fed up of his constant yapping. Even in his hometown of Liverpool, I would be stopped in the street by people begging me to spectacularly send him into retirement.

“Bellew is completely delusional if he thinks he can beat me. He still thinks he’s on the set of Creed and there will be some kind of Rocky-style happy ending. But come March 4th at The 02 in London I will bring reality crashing down on him.”

Bellew’s words were also rather telling—emblematic of how this fight had been manufactured just seconds following his first world title defence. “I’ve backed him into a corner, left him nowhere to go, and now I have what I want,” said Bellew. “I’m not under any illusions, I know exactly what I am going up against, it’s big risk, big reward.”

Credit must go to Bellew, who not only made a big British boxing bout appear from thin air, but will also be moving up in weight just to make this fight happen—one which will most likely make him the most money in his fascinating boxing career. This is also a welcome change to the opponent originally slated to be Haye’s next opponent in Shannon Briggs—with both Haye and Bellew now facing by far their toughest opponents in years. But, it will be hard to forget how plastic this “rivalry” feels come March.

Could Walters’ Decision to Quit Against Lomachenko Have a Lasting Impact on Combat Sports?

Penance For The Prince: Remembering Naseem Hamed’s One, Humbling Defeat

Danny Garcia Is Ready to Make Some Noise as a Welterweight