Home MMA News Demetrious Johnson fears he may have ‘small tear’ in LCL, to have MRI in coming days
ShareTweet 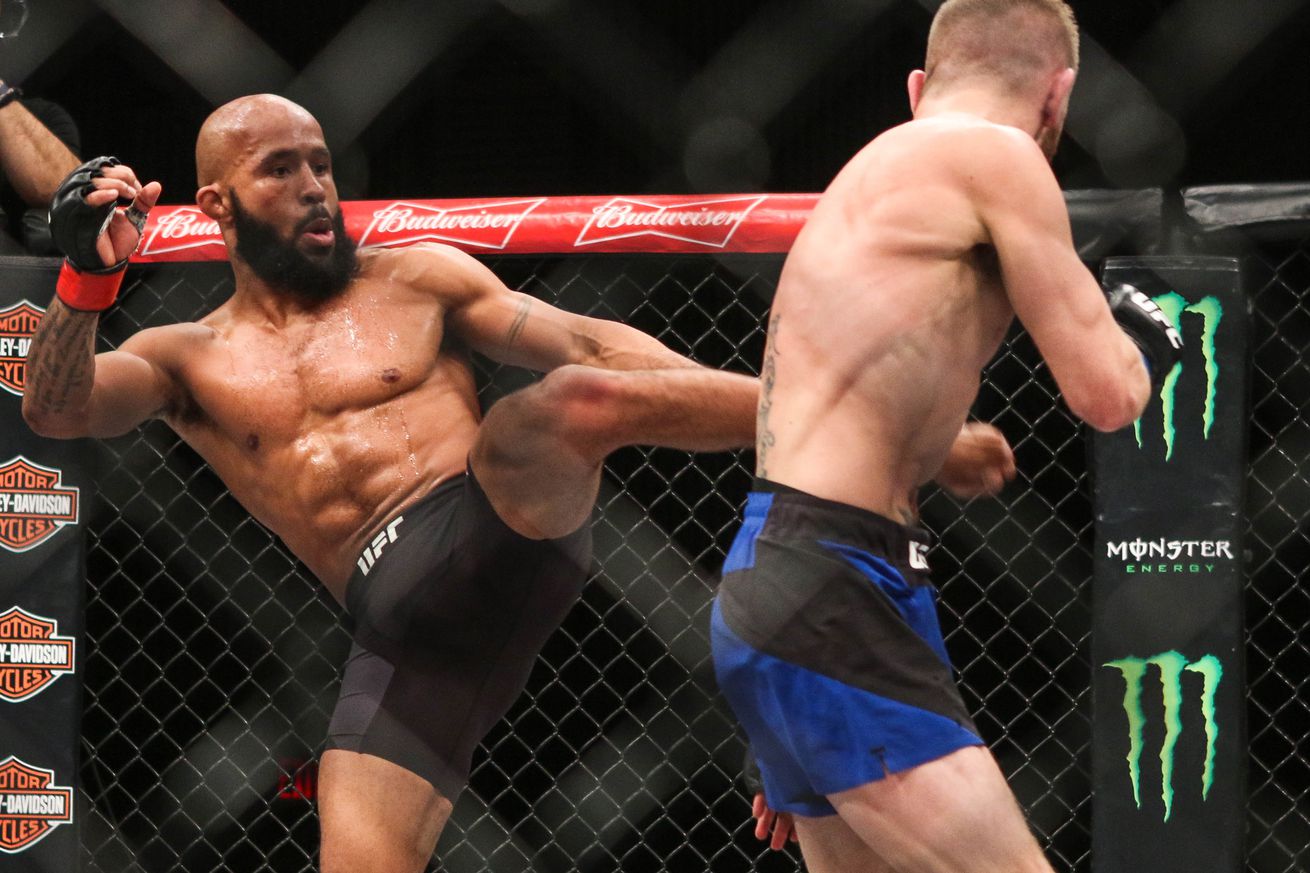 With Demetrious Johnson having successfully defended his flyweight title a ninth time on Saturday might against Joseph Benavidez at The Ultimate Fighter 24 Finale, the countdown to history has officially begun.

As in: How long until Johnson goes for a record-tying tenth title defense to join the ranks of Anderson Silva, and who will that record come against?

The most obvious answer is Joseph Benavidez, who defeated Henry Cejudo in the co-main event at TUF 24. Yet the 32-year old Benavidez is already 0-2 against “Mighty Mouse,” which gives it an extra layer of complication — even if Benavidez has reeled off six straight victories after losing to Johnson a second time back in 2013.

As for Johnson, who has not lost a bout since 2011 against Dominick Cruz while still competing as a bantamweight, it doesn’t matter who the UFC stacks in front of him.

“It’s up to the UFC man,” Johnson said during an appearance on Monday’s edition of The MMA Hour. “At the end of the day, it’s going to be the third fight. Is it going to sell? I don’t know if it will or not. But if that’s what they UFC wants, that’s fine. Out of all my title defenses, and this one was number nine, I’ve never picked who I was going to fight. I never cared who I was going to fight because at the end of the day it makes no difference.”

After a hard-fought unanimous decision over Tim Elliott on Saturday, the biggest factor would seem to be motivation. Johnson has already defeated Benavidez on a pair of occasions, so how would he work himself up for a third bout? It’s similar to Elliott, who made his way to Johnson by navigating the TUF concourse after being cut by Zuffa in 2015.

Still, Johnson’s disclosed purse for the Elliott fight might have filled in for lack of dramatic emotional detail in the fight. He earned $350,000 to show, with no win bonus, giving him the highest payday of his career.

Johnson said motivation is never a factor, so long as he’s getting paid. And in this case, so long as the UFC books him in the fight capital of the world.

“Yeah, it’s another paycheck, I’ll always be motivated,” he said. “This is how I make my money. I’m always willing to go out there and put it on the line. I mean, if you look at that [Elliott] fight, I had everything to lose and nothing to gain essentially.

“But at the same time, this is my job. The UFC calls and says, ‘hey, this is who you’re going to fight,’ it’s okay. The only think I ask is that I fight in Vegas. I want to break the record in Vegas. That’s where I think I perform my best, and I have my best weight cut. If I’m going to have my…in all my years of being in the UFC and putting my foot down, this is the first time I’m saying I’m fighting in Vegas. I’m not fighting anywhere else.”

The next big card after the Dec. 30 pay-per-view (UFC 207) happens in March at UFC 209. When that event was thrown out as a possible date for his return, Johnson revealed he might not be ready by then due to a possible injury he suffered against Elliott.

“That might be too soon,” he said, after counting up the months. “I’m going to go get an MRI possibly Tuesday or Wednesday. I think I might have had a little tear in my LCL in my right knee. It happened in the first round of the fight when we were grappling, I heard a little pop, and I think I might have a pop or tear in the LCL.

“I had a tear in my left knee, I know the feeling of it. It’s still swollen right now, when the swelling goes down I’ll have an MRI to make sure.”

In what was an unusual occurrence for Johnson, who is considered by many to be the best active pound-for-pound fighter on the UFC’s roster today, he didn’t win the first round. The unorthodox fighter Elliott put Johnson in danger with a guillotine choke and later a D’Arce that swung the round to him, meaning Johnson was in the rare spot of fighting out of a deficit.

He did come back. Johnson won the rest of the rounds. He said the knee injury didn’t make him panic.

“Adrenaline takes over,” he said. “I’ve fought with a broken leg, a broken rib, a broken hand…so when it popped I was like, okay, fun fun.”