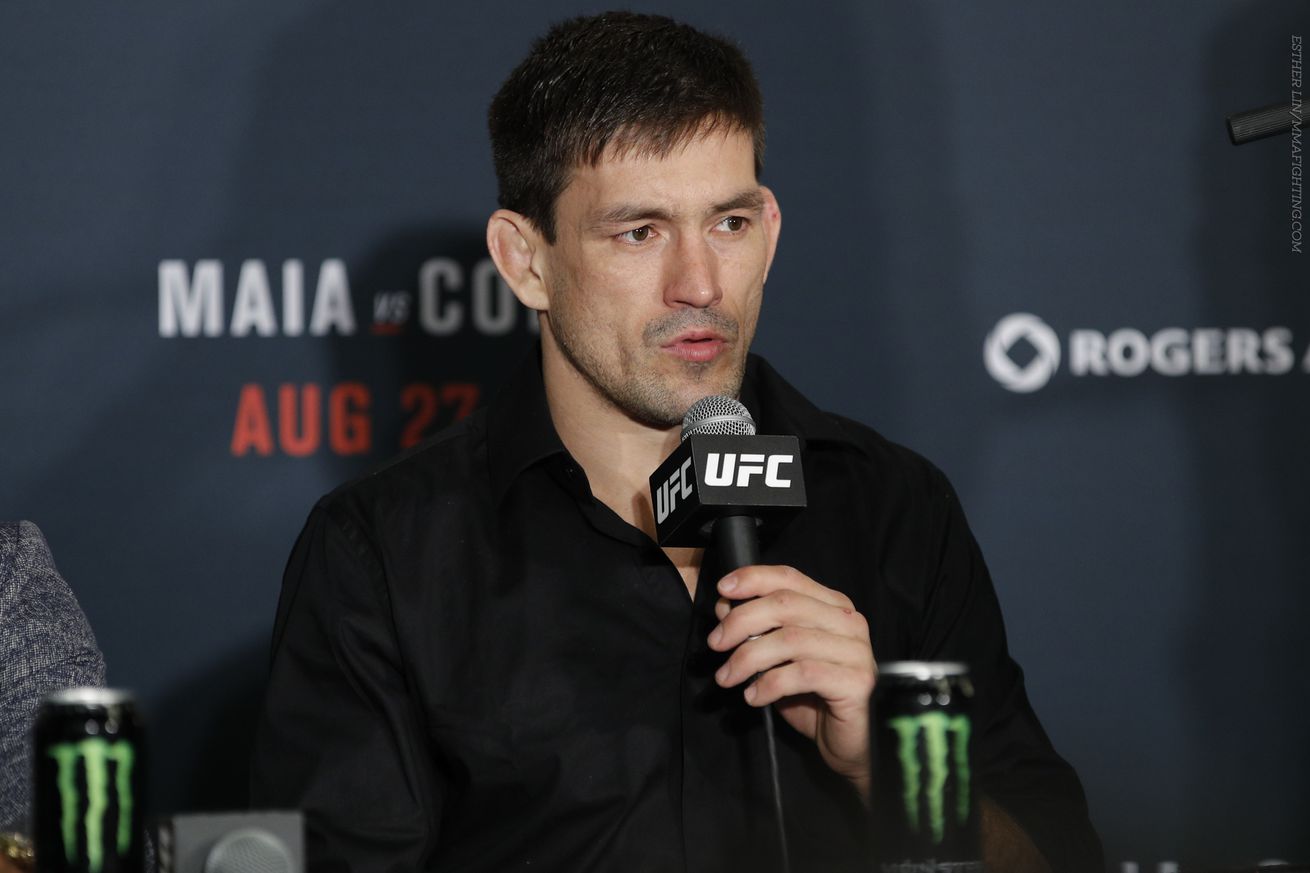 Demian Maia seems to be the No. 1 contender in the welterweight division, but he’s not getting booked to fight the champion.

The Brazilian has been undefeated at 170 pounds for the last three years, compiling six straight wins over tough opposition. In his last outing back in August, Maia scored an impressive first-round submission over former UFC interim welterweight champion Carlos Condit. Following his sixth consecutive victory, it was expected that Maia would challenge the winner of Tyron Woodley vs. Stephen Thompson, which was set for UFC 205 in November. However, the title fight ended in a controversial draw, and the two fighters were booked for an immediate rematch at UFC 209. Maia opted out from taking another bout in the meantime and decided to patiently wait for his deserved shot at the belt.

Last week, just days away from the rematch between Woodley and Thompson, the UFC announced that Maia had been scheduled to fight Jorge Masvidal at UFC 211 in May. The booking against Masvidal surprised many, seeing that the UFC was just days away from needing a new title challenger.

Now, a week later from the fight announcement, Woodley is in need of a challenger after having successfully defended his belt, and there are no clear contenders available to fight. Like many, Maia found it weird that the UFC wouldn’t wait to give him the title shot, but instead made him take another bout.

“I don’t know, I really don’t know,” Maia told Ariel Helwani on Monday’s edition of The MMA Hour. “I think that is has nothing to do with them [UFC], I just think that sometimes it’s a little bit weird that they are holding me too much. I remember when I fought Gunnar [Nelson] and I was watching the fight between [Robbie] Lawler and [Carlos] Condit. I was there, watching cage side, and they were filming me, so I thought I was going to be the next one and everybody was talking about that. But they [UFC] said no, and they put me against Matt Brown. Then, after the Matt Brown fight, I thought, ‘okay, I’m the next one,’ but then they said no.

“Then I fought Condit, and I won in a very good way, but I got no again. So I don’t know, I don’t know. Lately, with the changes in the company, it’s sometimes hard to read, hard to understand.”

According to the UFC, Maia needed to be more active to earn a crack at the belt, but some of Maia’s critics believe that he has a lack of ability to sell pay-per-views, and that’s essentially what’s been stopping him from fighting for the welterweight title. Maia doesn’t fully discard those claims, but says it’s a problem that involves everyone in the division, not just him.

“Everybody says, ‘oh this guy sell fights, this other guys doesn’t sell fights,’ but the reality is that in the welterweight division nobody sells fights well,” Maia explained. “Sometimes people push off my shoulders with these things, but in my last fight, I got a submission win, and in previous fights, I’ve had great performances and people want to watch my fights. I’m not saying that their last fight [Woodley vs. Thompson] was bad, but everybody knew it didn’t sell well, it wasn’t so exciting. So it’s not just my problem, it’s all of us together.

“The UFC needs to promote a little bit more, and welterweight is a division that is hard to sell nowadays and that’s it. I think that people believe in lies and they repeat the lies so many times that the people start to believe, ‘ah, Demian is not fighting for the title because he doesn’t sell.’ And that’s not true, I wouldn’t sell worse than ‘Wonderboy’ Thompson did, I think I could sell better.”

Maia believes that selling a fight mostly comes down to how the UFC does the marketing. The company was able to promote the rematch between Woodley and Thompson, a fight he found to be boring the first time at UFC 205, as the main event of the UFC 209 pay-per-view.

“Marketing is everything,” Maia said. “When I watched the first fight between Woodley and Thompson, and I want to make clear that I really admire both guys, for me the fight was really boring at UFC 205 because nobody pulled the trigger for three rounds. The fourth round there was a scramble and that was really exciting, but then the fifth round was so-so again.

“But in order to make the second fight, the UFC gave them Fight of the Night because after two or three weeks nobody would remember well and then the people would say, ‘okay, it was a nice fight because it was Fight of the Night.’ But for me, that was far [from being] Fight of the Night. So people start to talk about that and that makes a buzz for the next fight, so it’s not so hard. When you want to push somebody, you can do it.”

For now, Maia feels a bit frustrated that he hasn’t been able to fight for the title, but he tries not to worry about that since it’s not a situation he can control.

“I know my mission is not just to be a champion, I mean, being champion would be great and I want to be one, but it’s not under my control, you know. I think I could be champion right now, but it’s not under my control because I need to be chosen to be in a title fight, and winning the title fight is in my control, of course, but it’s not in my control to get the opportunity to fight for the title. As an athlete, of course I get a little bit frustrated, but I have things much bigger to accomplish in life and I’m happy for that.”