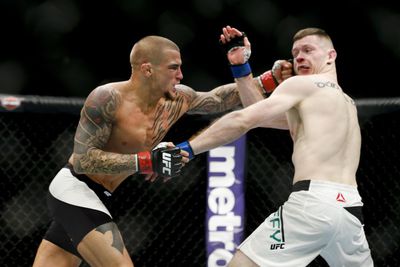 UFC lightweight Dustin Poirier’s evening wasn’t half bad. For starters, he recorded a hugely important win over rising sensation Joe Duffy at UFC 195 in Las Vegas on Saturday night. After taking over in the second after a tough first frame, Poirier continued to pour it on in the third with takedowns and hard-fought top control. The scores were 30-26, 30-27 and 30-27 all in favor of “The Diamond.”

More importantly, his bout set records on the UFC’s streaming service, Fight Pass. Poirier and Duffy were set to compete in the main event in Dublin, Ireland in October at UFC Fight Night 76 on Fight Pass, but the bout was canceled last minute when Duffy failed concussion screening. In order to honor Fight Pass subscribers and give Ireland a chance to catch the bout live, the second booking of the bout was added to the Fight Pass portion of the UFC 195 preliminary card. The move caused some controversy as a fight of this magnitude is usually reserved for the main card in any type of UFC event, but according to UFC President Dana White, the move apparently paid dividends.

While Poirier admitted he had no clue what the bout drew, White was unequivocal. “It broke the record,” he said at the post-fight press conference. “It’s the most-watched fight we’ve ever had on Fight Pass.”

As for the fight itself, Poirer told the media it mostly went according to plan. Duffy, he said, was as advertised, but their game plan was enough to earn him the victory.

“I thought his boxing was going to be good and it was,” Poirier said. “I knew he had a good ground game, a lot of submissions on his record. I executed the game plan me and my coaches had. I stayed in his face, ….View full article