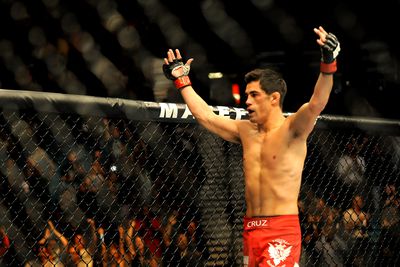 Especially for a guy who’s competed just once since 2011.

But as we saw in the Takeya Mizugaki fight, layoffs don’t appear to have much effect on “The Dominator,” who was stripped of his bantamweight belt after multiple injuries. In his absence, the title was captured by Renan Barao, who promptly coughed it up to Dillashaw.

Cruz talks to 98.5 The Sports Hub (via MMA Fighting) with “The Viper” by his side:

“All my fights were for titles. Top five guys. He’s fought one guy in the top five. How hard is it to finish guys in the top five compared to the top 15? He’s gotten finishes against guys in the top 15. That’s nothing. He was emulating me for all his teammates. Then decided, ‘Wow, I’m beating up all my teammates here at Team Male with Dominick’s style, so maybe I should use this to go win a title while he’s hurt.'”