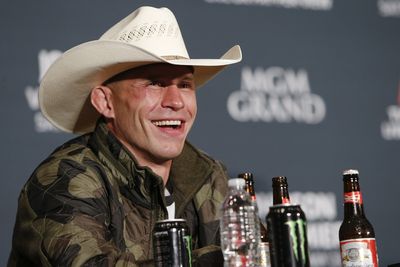 LAS VEGAS — When Rafael dos Anjos defends his UFC lightweight strap this Saturday at UFC on FOX 17, it’ll be the first time he has competed under the sport’s new era of USADA drug testing.

And for Donald Cerrone, after having fought dos Anjos in 2013 and watched him truck through Anthony Pettis in May, let’s just say that “Cowboy” expects to see a different version of the Brazilian when the two rematch in Orlando.

Dos Anjos has been randomly tested four times in the fourth quarter of 2015 according to USADA’s official UFC database, which was last updated Dec. 10. And while the lightweight champion has never before failed a drug test, Cerrone isn’t shying away from his statements.

A chiseled and unrelenting dos Anjos captured the title with a dominant performance over Pettis at UFC 185, despite entering the fight with a torn MCL in his knee. Now, after having seen a slow trickling of fighters shrink down to a smaller size since the UFC-USADA partnership began in earnest in July, Cerrone believes that many observers will be surprised by the changes they see from his opponent on Dec. 19.

“Absolutely, dude,” Cerrone said. “You see it a lot. Not dropping any names, but you’ve seen a lot of guys: ‘oh, wow, you look different… and your cardio is different. And you can’t walk through those punches like ….View full article