Home MMA News Donald Cerrone: I don’t know if the UFC will call me after that a– whooping
ShareTweet 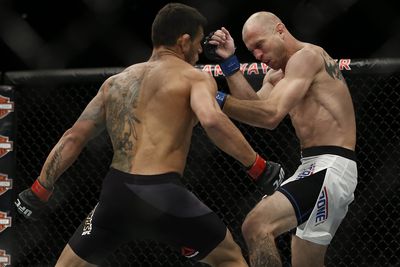 “Cowboy” tasted defeat for the fourth time in his career with a world title on the line and isn’t sure when exactly he’ll make his return to the Octagon.

Donald Cerrone was deflated following his staunch dismissal at the hands of UFC Lightweight champion Rafael dos Anjos in the main event of UFC on FOX 17 last night (Sat., Dec. 19, 2015) inside Amway Center in Orlando, Florida.

“Cowboy” was taken out by the Brazilian bomber in just 66 seconds (video) by a relentless onslaught of punches and ground strikes, which marked the fourth time he came up short chasing gold in his professional mixed martial arts (MMA) career.

Cerrone thoughts on the mauling from “RDA” at the post-fight presser:

“Sometimes you don’t show up to work, so you get your ass kicked. Hats off to the son of a b–ch; he did what he had to do. He caught me with the knee, not the kick. The kick didn’t land. The knee is what started it then he put a great onslaught of punches on me. He did a great job of overwhelming me and doing what he had to do to remain champ … [on when he might return or get a call] I have no idea how that’ll work. I don’t even know if they’ll want to call me after that a– whooping.”

There’s not much else you could say about a beatdown like the one he received in the “Sunshine State.”

Dos Anjos has been on a tear for the last two years, sending the likes of former 155-pound champions Benson Henderson and Anthony Pettis packing, en route to five straight easy wins.

Cerrone has typically set foot in a cage no later than six months after a loss during his near 10-year career. He will undoubtedly ….View full article