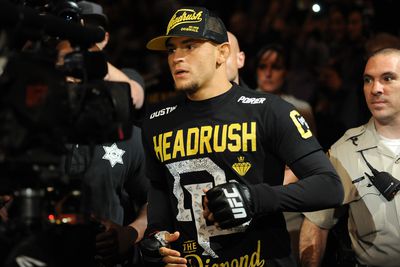 As a result of a late injury to original headliner Joe Duffy, who left Dustin Poirier without a date to the big dance, UFC Fight Night 76 became “Holohan vs. Smolka.” That said, it could have very easily been transformed into “Poirier vs. Parke.”

“The Diamond,” however, turned it down, as he was not interested in facing a “small fish” like Norman Parke after spending his entire fight camp preparing for “Irish Joe.”

“Maybe he was thinking I’m just a small fish, he wants bigger fish to fry,” Parke told Whoa TV. “That’s his personal opinion. That was his decision, you have to respect that. I’m fighting, that’s all that matters.”

Parke is scheduled for a lightweight showdown against Reza Madadi on the UFC Fight Pass main card, which airs this Saturday afternoon (Oct. 24, 2015) inside 3Arena in Dublin, Ireland.

As for “The Diamond?”

“This is a business, I’m a professional athlete,” Poirier told MMA Junkie. “This isn’t, ‘poke somebody and start a street fight.’ I was contracted to fight a guy who I prepared for, and it didn’t happen. Now we’re not just going to scramble and pick a guy and fight.”