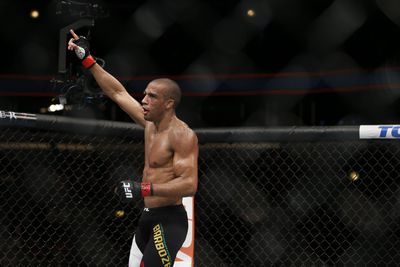 Not a bad consolation prize.

Edson Barboza was officially named the replacement for the injured Khabib Nurmagomedov in a co-main event fight with Tony Ferguson at The Ultimate Fighter 22 Finale on Dec. 11 in Las Vegas, the UFC announced Friday.

MMA Fighting’s Ariel Helwani was the first to report the news of a rib injury to Nurmagomedov forcing him out of the contest as well as the intention to have Barboza step in Thursday night.

Barboza (16-3) is coming off a thrilling, unanimous decision win over Paul Felder at UFC on FOX 16 in July. In all, the Brazilian striker has won three of his last four fights. Ferguson (19-3) is on an even bigger roll, having won six fights in a row. His last victory was via unanimous decision over Josh Thomson in July.

Nurmagomedov (22-0), regarded as one of the best lightweights on the planet, has not fought since April 2014, a dominant win over current UFC lightweight champion Rafael dos Anjos. Nurmagomeov tore his ACL and then reinjured the knee before what would have been a title eliminator with Donald Cerrone in May. Now, a rib injury has forced ….View original article