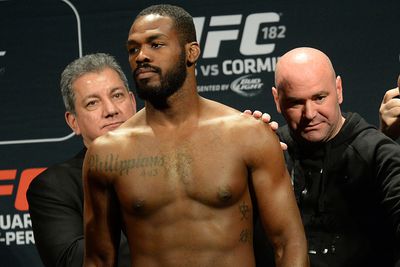 Ultimate Fighting Championship (UFC) was hailed for its tough love, stripping Jon Jones of his light heavyweight strap and suspending him indefinitely following last April’s hit-and-run accident that landed “Bones” in all sorts of legal trouble.

It also forced the cancellation of his 205-pound title defense against Anthony Johnson, which was then handed to Daniel Cormier on a silver platter in the UFC 187 pay-per-view (PPV) main event, taking place last May in Las Vegas, Nevada.

But the way Jones describes it, the promotion’s decision to banish him from the combat sports community came after he informed UFC CEO Lorenzo Fertitta and UFC President Dana White that he was too distraught to compete against “Rumble.”

From his conversation with Ariel Helwani:

“They had never come to see me before. First time they came to Albuquerque to visit me was to take my belt away. Honestly, Lorenzo seemed like he really did care. Lorenzo seemed very genuine. He looked me in the eyes the whole time and was like, ‘how are you doing?’ At the time I didn’t know how I was feeling, I was all over the place emotionally. At the end of the day, it was still ….View original article