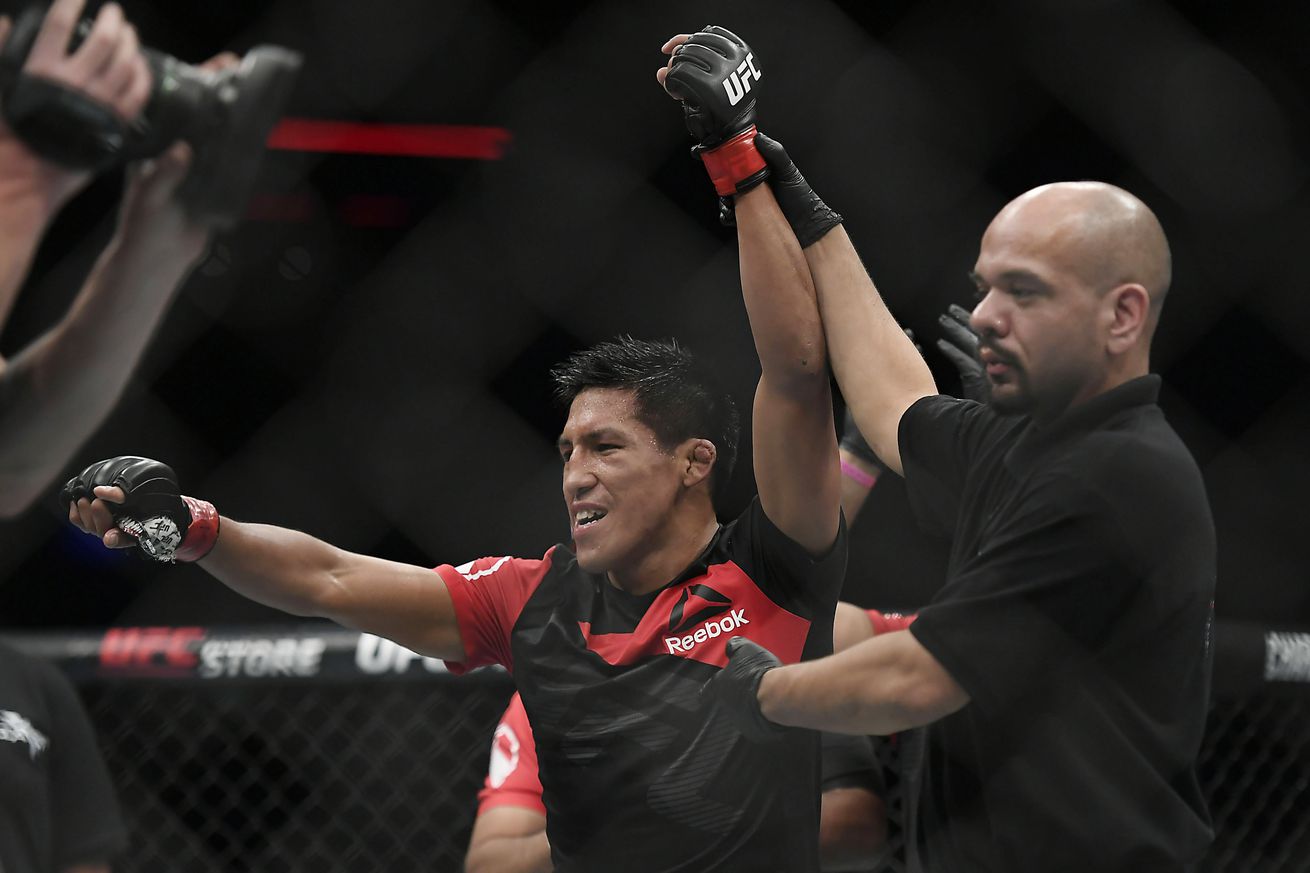 At 27 years old and already with 15 professional fights in his record, Barzola believes it’s a good moment for him to take the next step in his career. The Peruvian fighter, who was crowned the lightweight champion of season two of The Ultimate Fighter: Latin America in 2015, has compiled a record of 2-1 in the UFC with a controversial split-decision loss to Kyle Bochniak at UFC on Fox 21.

For Barzola, this next step in his career means facing ranked opposition or big-name opponents who can elevate his status in the UFC’s 145-pound division. The first person that comes to mind for Barzola is former UFC bantamweight champion Renan Barao.

“I’d like to fight Renan Barao because it’d be a very big step for my career, so I hope the UFC considers me for that fight,” Barzola told MMA Fighting. “I know it’s a hard fight, but I know I have all the strength and capability to beat him. I’m confident in my talent, I’m confident in my training, my coaches, and my team, so I’m sure that I would give him a good battle, and that it would be a good victory for me. I know Renan Barao used to fight at bantamweight, but now he fights at featherweight, so why wouldn’t I want to fight and beat a former champion of the UFC’s bantamweight division? I know that that would be good for my career, beat a former champion, and I think that would help me advance very quickly to the top of the division.”

Apart from a fight with a former champion in Barao, Barzola would also be open to fighting Artem Lobov, who’s currently on a two-fight winning streak. Although Lobov is unranked, unlike Barao, Barzola thinks a win over Lobov could also do good for his career.

“We’ve been challenging each other on Twitter, and well, Artem replied to the message I sent him, saying that he wanted to fight me too and he tagged Dana White,” Barzola said. “We were never disrespectful to each other, we’re just trying to make the fight happen, and that would be a good fight, too. We’re both coming off victories, and a win over him would also be good because he’s from Conor McGregor’s team. That would be more of a chess move because if I get someone that’s well known, like McGregor’s teammate, that could get my ranking higher and make me more well known.”

Barzola would ideally like to fight at the end of March or beginning of April, and hopes to start getting higher-ranked opposition, as he doesn’t want his prime years to go to waste.

“I’m in my best moment, I’m young, I’m 27 years old, I’m at the age where I’m both physically and mentally strong as a fighter and as a person,” Barzola said. “Right now, I’ve been resting since my last fight in Mexico, but I’ve been preparing a lot, strengthening many areas that I needed to improve like my Muay Thai, my boxing. I’ve improved a lot.

“I feel prepared because I’m always training to improve, and to this date, I haven’t stopped improving. I’m getting very technical and I’m strong. Like I said, I’m at my best moment right now, I’m young, and I have a lot of strength, and I’m hungry to improve as a fighter. I don’t want time to pass, get to 30, and not have fought against the top. I want to fight against the best fighters right now, no matter who it is against.”