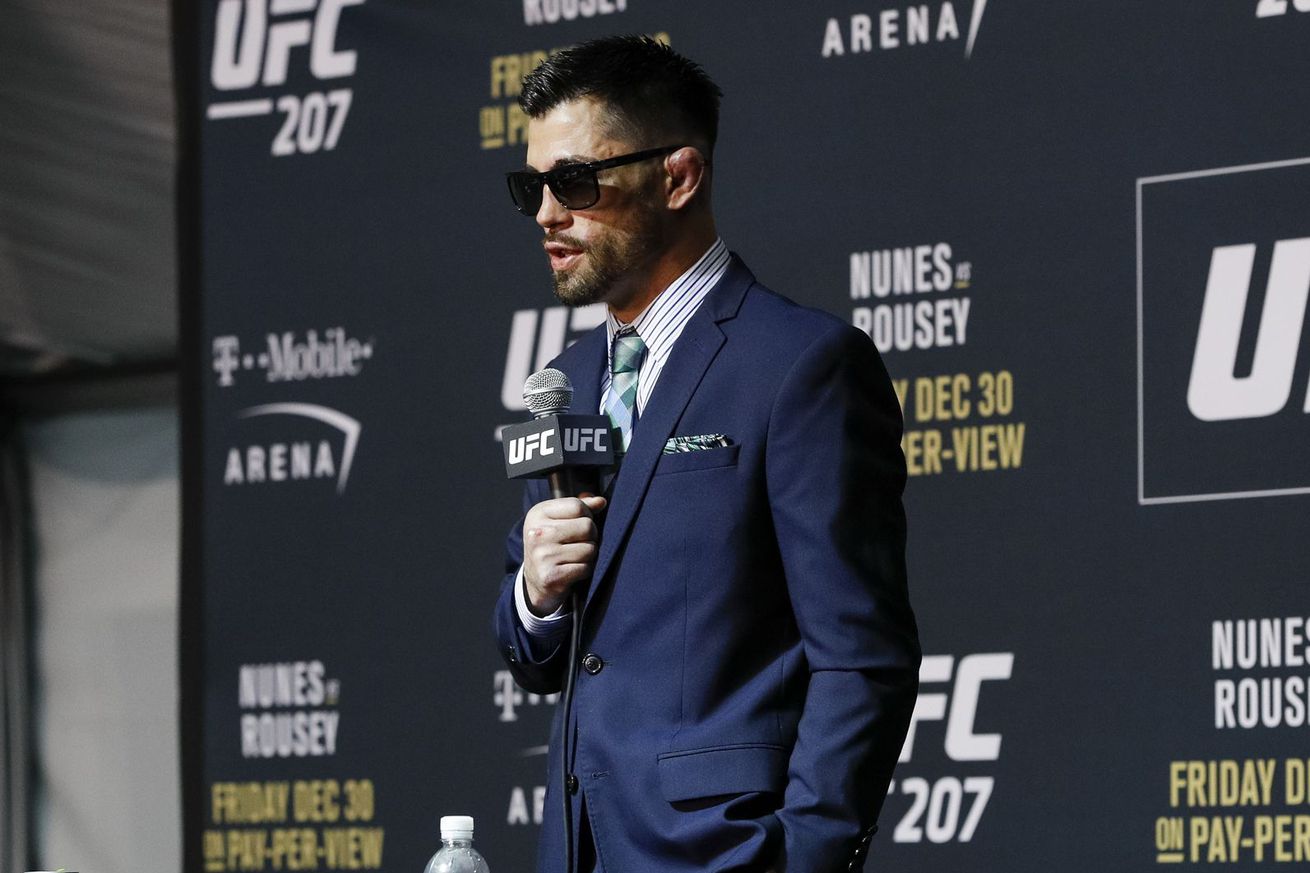 LAS VEGAS — For the first time in a long time, Dominick Cruz felt the sting of defeat at UFC 207. The two-time UFC bantamweight champion lost an electric contest to undefeated challenger Cody Garbrandt on Friday night, dropping a unanimous decision to the young Team Alpha Male product at T-Mobile Arena.

Despite expectations that Cruz would be the more elusive fighter, it was Garbrandt who controlled the action and landed repeated hard blows on the champion whose shadow had loomed over the bantamweight division since 2010. Garbrandt ultimately swept the official scorecards (48-46, 48-47, 48-46), and even notched a 10-8 round four in two judges’ eyes. But despite the fiery trash talk that dominated the bout’s build-up, Cruz was nothing but gracious in defeat.

“I enjoyed every second of this fight,” Cruz said at UFC 207’s post-fight press conference. “Look, I’ve been fighting the best guys in the world for the past 10 years, the top two in the world. I’ve been on the pound-for-pound list for a long time. Even when I was hurt with triple ACL reconstructive surgeries, there was a target on my back. I had to come back and fight through it. This was no different. This was just another fight that I had to challenge myself.

“After feeling it, after getting through it, after seeing the look in his eyes a couple times when I punched him, when I kicked him, when I fought, I’m not disappointed in myself at all. All I can say is I lost, and I’ll take my loss like a man.”

The opening two rounds of the contest were littered with back-and-forth exchanges, however Garbrandt began to pull away from round three onward, drawing Cruz into the pocket and unloading hellacious counter-shots whenever the champion tried to lunge inside with his unique, herky-jerky attacks.

Garbrandt dropped Cruz to the canvas several times and was masterful defensively, at times even lowering his hands and employing a Silva-like series of dodges and slips to great effect.

“It was just the range,” Cruz explained afterward. “It was the range. He controlled the range better than me tonight with the pull. He didn’t play a lot of push. He was backing up a lot, but he believed in his power. So because he believes in his power, he sat, he waited in the middle, and he said ‘come to me, and when you come to me, I’m going to pull you into my power.’ That’s okay. That’s the game you play. I take the risk of having the higher output on a lot of these guys. By having the higher output, that leaves me open for bigger shots.

“It was just the little things,” Cruz continued. “Like I was throwing empty kicks. I wasn’t setting them up as well, so that led him to counter better with his power instead of setting my kicks up better. That would’ve allowed me to close the range a little bit better instead of him pulling me into his power. There’s little adjustments I can make to make this a better fight, make it a little bit closer, make it a little bit more competitive to where I can win it. But tonight was his night

“I’m there to put on a show. If I would’ve pulled back and stopped throwing a little bit, I think that fight could’ve been a little bit more stagnant. But who the hell wants to watch that? I’m here to have fun. I’m here to challenge myself. And I have to have that output in order to go out there and try to win this fight. And there wasn’t one second of this fight I wasn’t trying to win.”

The loss was Cruz’s first in nearly 10 years — a run of success that dated all the way back to Cruz’s infamous stumble against Garbrandt’s coach and mentor, Urijah Faber, in March 2007 at WEC 26. As such, defeat was a new sensation for Cruz, and although he didn’t quite know how to describe how he felt, he compared his emotions to the pain he endured during the tragic series of injuries that kept him out of the game for the better part of four years.

“I have a feeling [this loss] going to hurt worse in a couple days,” Cruz said. “But one thing I am happy about is I get to see who’s real around me. When I had my knee injuries, it was a reality check. A lot of people leave your side. A lot of the support leaves you. Let’s see who’s real out there. Who really loves me? Who really cares about me? Who really has my back, whether I win, lose, or have a draw? The real people are about to show themselves to me, and for that, I’m happy.

“I’ve got to find a positive in this stuff because I did challenge myself very heavily,” Cruz continued. “There is nothing about this trek that I’ve taken since my comeback that has been easy. Not one fight. Not Faber, not Dillashaw especially, and definitely not Cody. So, what can you do, man? This is part of it, is losing. And part of life is losing. I think everybody can say, one time or another, maybe not in a fight, but you’ve felt like a loser. How do you come back from it? Let’s see. I know myself. I’ve lost before. It has been a long time, but I’m confident in my abilities. I’m confident in my mind. I’m confident at where I stand with everybody else in this division, and I know Cody’s good

“It was good to be able to at least fight somebody with a good heart,” Cruz added. “I said what I want about the guy about his smarts or whatnot, but he does have a good heart. And that’s important. So, enjoy being at the top, Cody. You’re a young champion. Try to keep it. It’s tough. Let’s see what you do with it.”

At just 31 years old, Cruz remains squarely in the title picture. He is still unquestionably one of the most talented bantamweights in the world, and even if Garbrandt’s first title defense is awarded to top contender T.J. Dillashaw, there is no doubt that Cruz will be lining up in the queue to get next.

But after everything Cruz has experienced over the recent years, one of the major takeaways from his injury layoffs once again rang true on Friday night — the idea that Cruz no longer needs the UFC title to be happy. It was a mantra Cruz reiterated once again in the hours after his loss, although he cautioned that people should first try to understand what he meant before jumping to conclusions.

“What I mean by saying that is not that the belt isn’t important to me,” Cruz explained. “What I mean by that is it doesn’t haunt my life anymore to where I need it. It’s a different thing. It has a different point when I say that. It’s actually to give strength to anybody who can actually hear the actual point behind it. Some will say ‘oh, well that’s good’ and ‘he doesn’t want it anymore.’ Well, that couldn’t be more wrong. I loved being the champion of the world. I loved being the best on Earth. But, I don’t need it to be happy, and that actually releases me and keeps me free. I can still be happy in defeat.

“That’s a freedom. I can’t say that I’ve always had that, but I still feel free. I still feel at peace. I’m still happy. I’m still happy that God gave me this platform to be able to challenge myself as a man, and evolve as a man, and become a better man. Regardless of what anybody says about prizefighters, every single one of these fights is a life lesson, if you look at it and view it right and if you use it correctly. And I used this eight, 10 weeks of camp, and this challenge in front of the media, and saying what you’re going to say and backing it up, and taking your loss and defeat, and all of this to grow as a human being. That’s why we’re here.

“We’re not here just to be the best at everything. We’re here to kind of be attached to everything but nothing at the same time. It sucks to lose. It’s the worst feeling in the world. But it not what I survive off of, being the titleholder. I’m a very happy individual outside of that, and for that I’m thankful.”