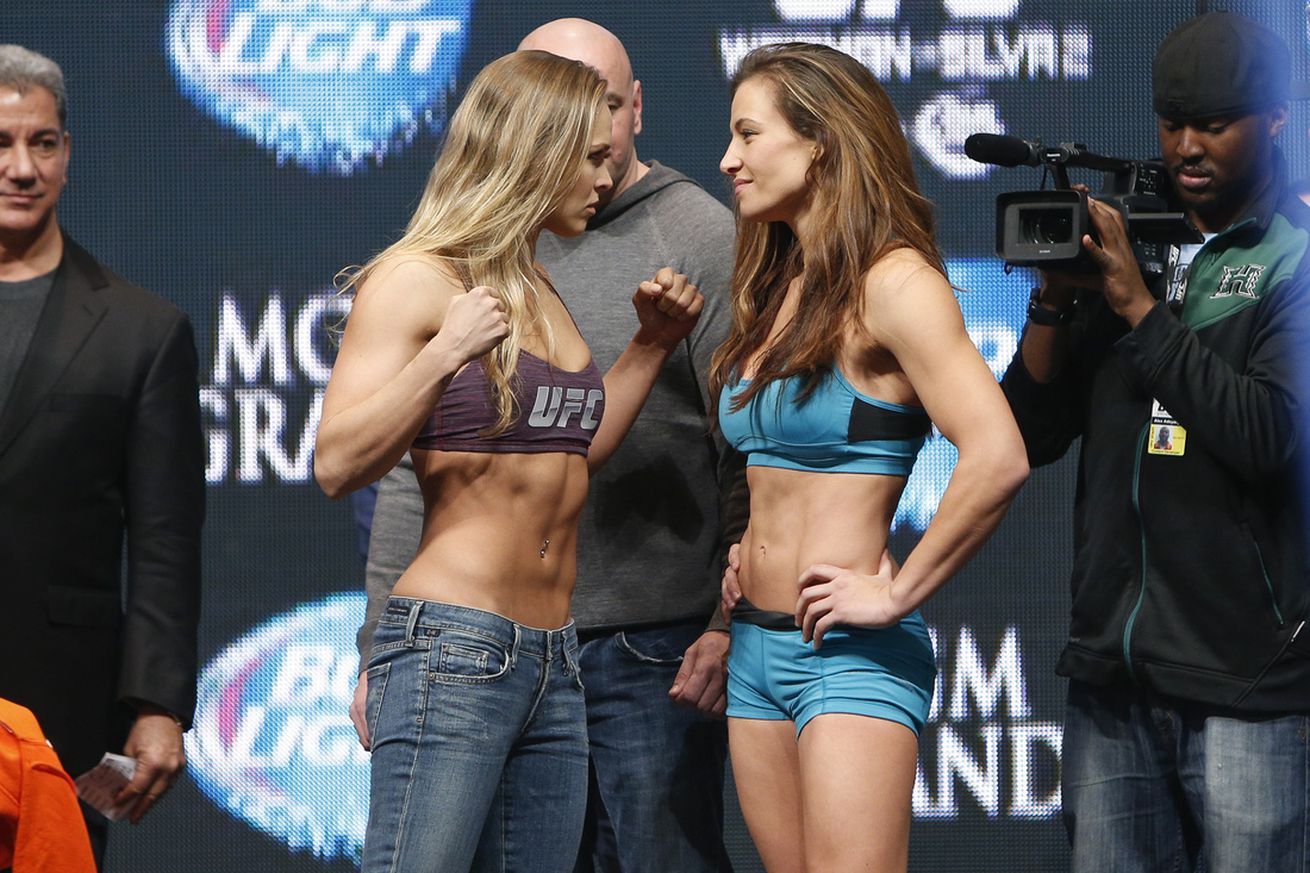 We’ve seen it before in mixed martial arts: Heated rivals becoming friendly once their heydays have gone by.

B.J. Penn and Matt Hughes, for instance, had an intense trilogy back in the day, but became friends and even training partners toward the end of their primes.

But there’s been no such thaw in the iciness between Miesha Tate and Ronda Rousey. Tate, the pioneering former Strikeforce and UFC bantamweight champion, retired after her UFC 205 loss to Raquel Pennington. Rousey, the former superstar, hasn’t officially retired, but hasn’t given any sign she’s going to return either following her UFC 207 loss to Amanda Nunes.

The way Tate tells it, if she was walking down the street and spotted her rival, to this day, she wouldn’t say hello to her.

“I wouldn’t say hi to her and I doubt that she would say hi to me either,” Tate said on a recent edition of The MMA Hour. “I think that we would just be like ‘oh’ and walk away from each other, like, awkward.”

The rivalry between Tate and Rousey began in Strikeforce, where Rousey defeated Tate to win the bantamweight title, then intensified in the UFC, where a heated season of The Ultimate Fighter led to intense interest in their rematch at UFC 168.

But Tate wouldn’t go so far as to say she hated Rousey, who defeated her twice.

“I don’t hate Ronda, I really don’t,” Tate said. “I don’t like her, but hate is such a strong word. I don’t like her because we don’t see a lot eye to eye, and we’ve had some bad conversations and I feel like she’s been very disrespectful. But at the end of the day, I’m not the person to harness hate toward someone, so, out of respect to her, I’d be like ‘hey,’ you know? There have been a couple occasions before things got way more heated where we were sort of okay, like ‘hi, bye’ okay, and I was fine with that, you know? But I think it’s more her terms than mine, which is fine.”

While Tate doesn’t have many career regrets, part of her wishes she got a third crack at her rival.

“I kind of regret not being able to fight Ronda for a third time, I would have liked for that to happen,” Tate said. “But I think we’re both at different points and it didn’t. So I can’t live with it as a regret. I don’t regret losing to Ronda, it was a all really good learning experiences and I learned from them earlier in my career and I was able to come back better from my losses.”

But that’s as close to dwelling on the past as you’ll catch Tate doing these days. She’s enjoying retirement and working as something of an unofficial brand ambassador for the UFC. She doesn’t miss the downsides of the sport, that’s for sure.

“At this point, you know, it’s all relative, but I would say right now in this moment of time, I’m happier right where I’m at,” Tate said.

“I don’t like I need to be fighting in there anymore. You know, 10 years was enough to fulfill that for me. I felt like I did everything, and accomplished a lot even though there more I would have liked to do, but there’s always going to be more. So really it’s just transitions to other things in my life that I want to do and what I want to accomplish. And it’s so nice not having the looming pressure of a fight overhead. It’s a lot of stress, it’s a lot of work, and a lot of sacrifice.”