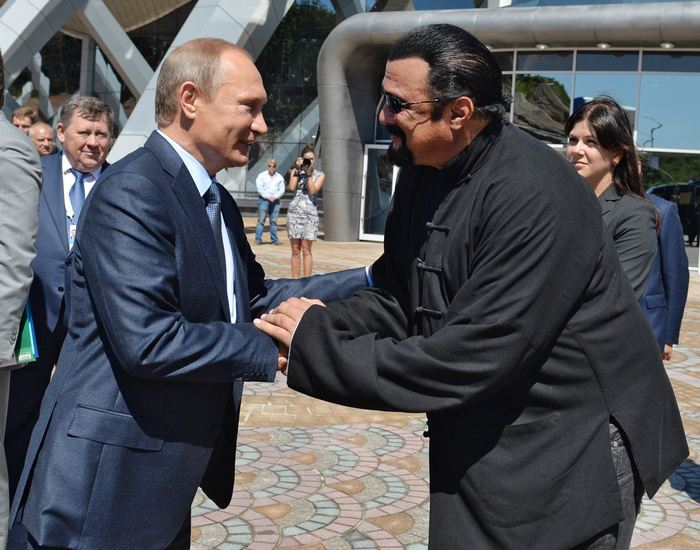 It’s been a while since we’ve seen the UFC’s favorite weird uncle, “Sensei” Steven Seagal, checking in on his favorite MMA pupils. In The Glimmer Man’s defense, though, it’s not like he’s been slacking off when he’s not teaching the likes of Anderson Silva and Daniel Cormier kicks and the secrets of the universe.

Seagal has completed and/or released eight films this year (including Sniper: Special Ops, The Asian Connection, and End of a Gun) and announced two more (including Above The Law 2!). He’s set up and eventually verified a Twitter account where he retweets political opinions that he agrees with, hints that Under Siege 3 might be in the works, and promotes his new signature knife and weapon line. He has a signature knife and weapon line. And, somewhere along the lines, he seems to have at least somewhat rekindled his epic bromance with Russian leader and instructional judo video star Vladimir Putin.

When we last checked in on this martial arts and martial law-loving duo in June 2015—which sparked over the admiration of a statue of Judo founder Kanō Jigorō in the blossoming days of the millennium—had gone lukewarm. Although Seagal appeared at a V Day parade and an Aikido seminar in Russia in May of that year, his public outings with his once constant chum Vladimir had all but dried up at that point. And Putin’s movie star-courting favor seemed to have turned to super serious boxer and t-shirt model Mickey Rourke.

But Rourke’s flirtation with a pugilism career was fleeting and self-centered. Seagal’s dedication to his grandmother’s homeland (she was originally from Vladivostok) remained as hard to kill as Mason Storm.

This past summer, the star and Aikido master, who was already tight with Chechen dictator Ramzan Kadyrov thanks to a ….View full article