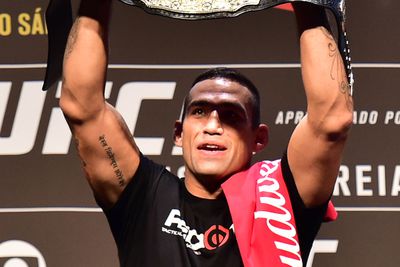 UFC heavyweight champion Fabricio Werdum is riding high. He earned the most coveted heavyweight title in mixed martial arts in June besting Cain Velasquez via third-round guillotine submission. The Brazilian champion, however, has even more to celebrate besides taking the title.

Werdum reportedly signed a new eight-fight contract the UFC. According to Ariel Helwani on UFC Tonight who spoke to Werdum’s manager Ali Abdel-Aziz, the deal is worth seven figures

“To be honest with you,” he said, “they didn’t have to do a new deal. We’re very thankful. [Werdum] wants to end his career as a UFC fighter, and the UFC was extremely supportive and generous.”

Werdum, 38, whose professional mixed martial arts (MMA) record stands at 20-5-1 is set to defend his title at UFC 196 in February when he’ll face Velasquez for the second time in as many fights. UFC 196 takes place at the MGM Grand Garden Arena in Las Vegas, Nevada.