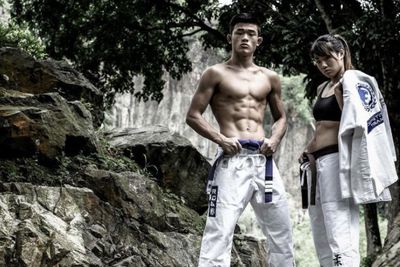 The UFC has a card this weekend built around rising prospects Paige VanZant and Sage Northcutt. Meanwhile, on the other side of the world, ONE Championship is breaking out their own young phenoms — and they just happen to be siblings.

Angela Lee, just 19 years old, is a burgeoning superstar in Asian MMA. She has reeled off three straight first-round submission victories this year for ONE, including a twister in her last fight. Meanwhile, her athletic ability, look and charisma have made her a fast celebrity in Singapore, where she lives and trains half the year.

ONE CEO Victor Cui said recently more than 2,000 people showed up to a Lee autograph signing at a G-Shock watch store in Singapore and ONE was not ready at all for the turnout.

“It was crazy,” Cui said. “We had no idea. We were so unprepared by how fast her following has grown. Once in a while you’re lucky when you have a charismatic, young, talented athlete and all that stuff comes together.”

Posted by ONE Championship on Friday, November 13, 2015