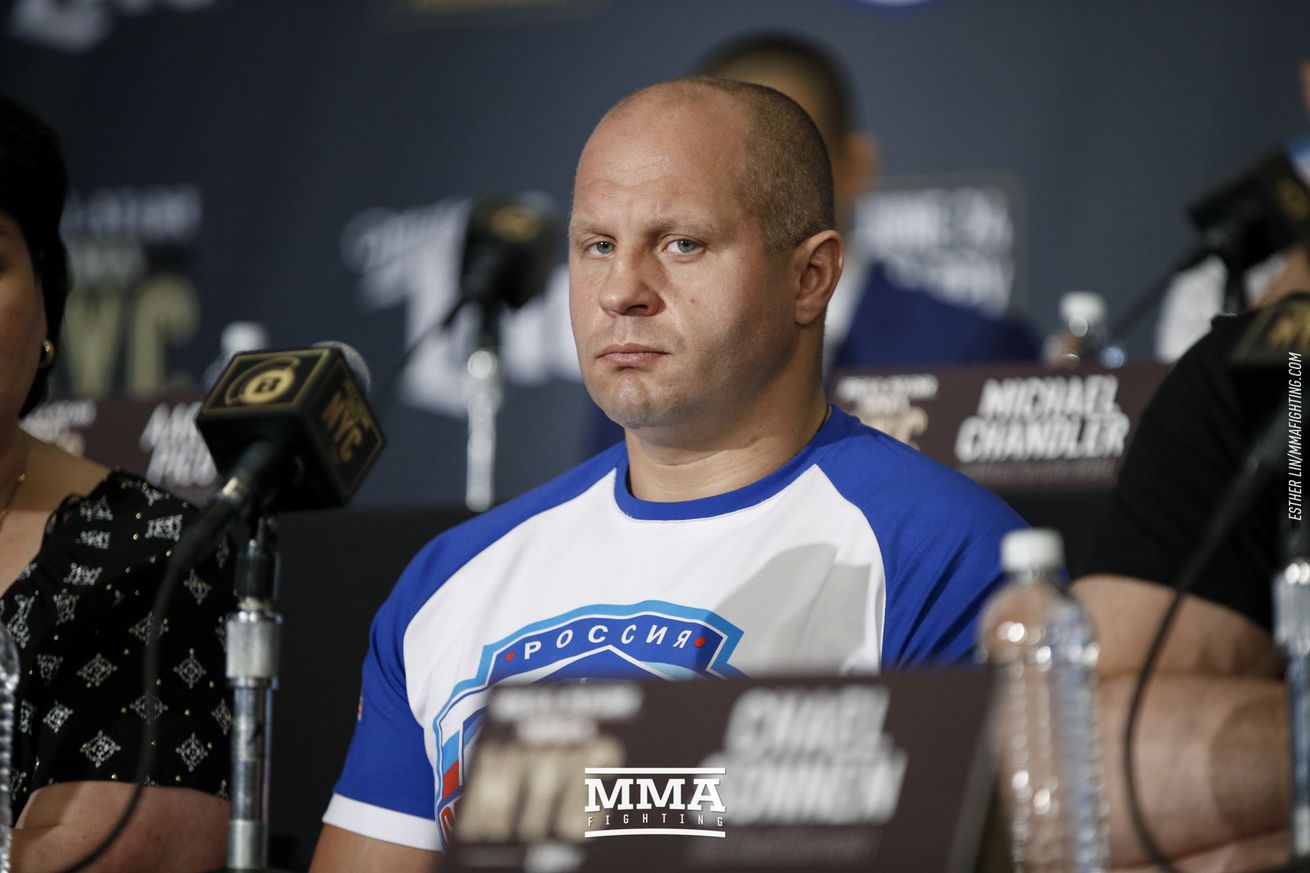 Fedor Emelianenko suffered the first big setback of his comeback tour Saturday night, losing via grisly first-round knockout in just 74 seconds at the hands of Matt Mitrione at Bellator NYC.

The loss was a tough result for the legendary Russian heavyweight, a one-shot stunner reminiscent of Emelianenko’s 2011 stumble to Dan Henderson. But even at the age of 40 and with his best years long behind him, the fighter who many consider to be the greatest heavyweight of all-time vows to continue his career.

“Yes, because I am a fighter,” Emelianenko said bluntly when asked if he intends to fight again, speaking through a translator at the post-fight press conference.

Emelianenko (36-5, 1 NC) is currently signed to a two-fight deal with Bellator, with the option of a third fight if he chooses, according to Emelianenko. The former Pride FC champion said earlier this year that he intends to retire under the Bellator umbrella.

That decision won’t be made anytime soon, though, as Emelianenko not only shrugged off the idea of retirement, but also voiced a desire to run things back for a second go-round against Mitrione after having dropped the former UFC fighter early in the opening stanza with a punch.

“Certainly, I would love to have the rematch with Matt Mitrione,” Emelianenko said. “It happened so that the movements were just mutual ones, and certainly Matt used the situation.”

The decisive exchange between Emelianenko and Mitrione was a strange one, to say the least. The two heavyweights combined for a rare double knockdown after simultaneously connecting with right hands in the first round. Ultimately, Mitrione popped back up quicker than Emelianenko and took advantage, pouring on brutal ground-and-pound that led to the stoppage.

The loss dropped Emelianenko to 2-1 following the Russian icon’s return from retirement in late 2015, however that didn’t stop the event’s pay-per-view headliner, Chael Sonnen, from calling out Emelianenko in the aftermath of Sonnen’s victory over Wanderlei Silva.

Emelianenko, though, didn’t appear to be keen on the idea.

“We’re in different weight divisions,” he said wryly when asked about Sonnen’s callout.

Sonnen quickly jumped in to state that he would be more than willing to cede the extra pounds to Emelianenko. Notably, Sonnen weighed-in just above the 205-pound light heavyweight limit for Bellator NYC, while Emelianenko tipped the scales at 236 pounds — 20 pounds lighter than his 256-pound opponent, Mitrione.

Sonnen credited Emelianenko for fighting Mitrione regardless of the weight disparity between the two heavyweights, and said he would be more than willing to move up to heavyweight himself and deal with the same type of disadvantage if it meant a shot against “The Last Emperor.”

Emelianenko, meanwhile, brushed aside the loss by saying that he was still feeling healthy and would not have changed anything he did in the lead-up to Bellator NYC, despite the outcome.

“I don’t think that I would have changed anything during my preparation for this particular fight, because I would be training the same way with my coaches,” Emelianenko said. “And I can tell you that during my camp, I just worked out really with all my energy, invested all my energy and forces into it.

“I’m feeling, myself, very good (right now). I just got the doctor’s inspection, so everything was good.”