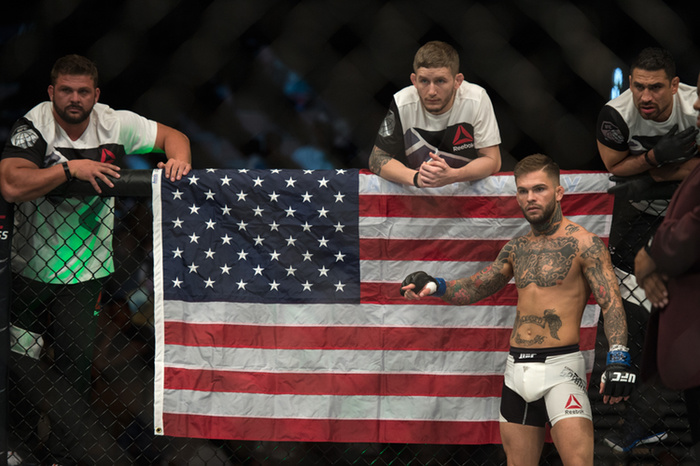 The final UFC card of the month took the organization back to its Las Vegas home with a rare Sunday-night showcase. Featuring some of the hottest prospects in the men’s bantamweight division—including Thomas Almeida and Cody Garbrandt, who fought in the main event—the card also saw action unfold in the heavyweight, middleweight, welterweight, lightweight, featherweight, and women’s bantamweight divisions.

When all was said and done, this Sunday-night card delivered as a fun one, highlighted by all the knockouts, submissions, and surprises we hoped for. Here’s a recap of the action for those who missed it.

Garbrandt Crushes Almeida in the First

The evening’s main event honors went to undefeated, 24-year-old bantamweight prospects Cody Garbrandt and Thomas Almeida, both of whom sought the kind of career-altering win that might catapult them into title contention.

Though the fans were divided on which prospect might win this bout, there was a near consensus on one thing: whether it was in the first or the fifth, the fight world end with a knockout. And that it did.

From the moment the opening bell rang, Garbrandt pressed forward, navigating a 5-inch reach deficit, and landing. When he appeared to hurt his highly-hyped foe, Garbrandt turned it on to seal the deal. One right hand later, and Almeida was on the canvas, hanging onto his consciousness with both hands.

With the win, Garbrandt moves to 9-0, with all but one of his wins coming by way of knockout or TKO. Now 4-0 in the UFC, the Team Alpha Male staple is likely to have earned himself a spot in the bantamweight top-15—perhaps even the top-10. A title shot seems like a matter of time. Almeida, meanwhile, has a baffling 21-0 record shattered by the loss. How the Brazilian slugger rebounds ….View full article