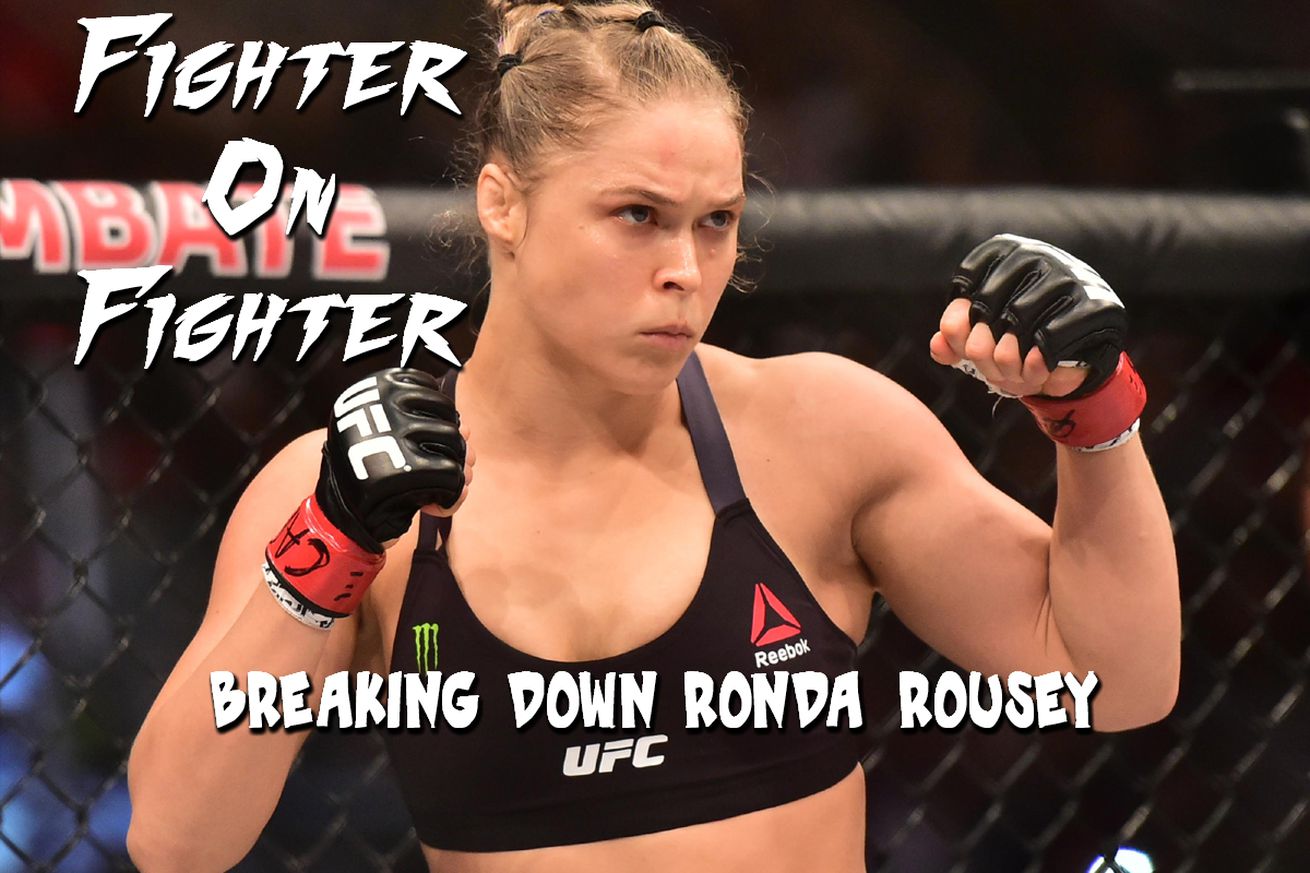 It’s been 13 months since Holly Holm knocked out Rousey … and we haven’t seen much of her since.

Even with her scheduled bout and reappearance, we still don’t have much of an idea since the former champion has refused to do any interviews or media of any kind in the lead up to this event. We do know, however, that “Rowdy” will make an appearance on Friday night when she attempts to reclaim her strap.

Does anything else really matter?

Let’s take a closer look at the former champion’s skills that allowed her to dominate for four years:

Rousey was picked apart and knocked out by Holm in a fight that really shined a light upon the issues with her game. That said, Rousey is one of her division’s hardest hitters, and she is definitely dangerous with her wild attack.

On the outside, Rousey’s combinations are far smoother than they once were. Rousey has natural speed, making her jab and cross two of her best weapons, cutting through her opponents’ looping shots. In particular, Rousey’s cross packs some serious wallop and has rocked a pair of her opponents (GIF).

That said, she also is willing to swing wide hooks that leave her open to counters.

Rousey does her best work on the inside, as one would expect of a Judo Olympian. Once Rousey closes the distance, she’s actually quite dangerous with her dirty boxing. While looking for her usual clinch throws, Rousey batters her opponent with small punches and elbows, creating openings.

In addition, Rousey’s knee strikes have quickly become very dangerous. She digs into her opponent’s liver sharply, which is one of the most painful blows to receive. Against Sara McMann, Rousey’s knee was so devastating to the wrestler’s bent-over posture that it sent her crumbling to the mat, resulting in Rousey’s first finish via strikes (GIF).

In one of her most vicious beatings, Rousey worked over Bethe Correia in about 30 seconds, and she did much of her damage in the clinch. First, she latched onto a single-collar tie and smashed Correia with right uppercuts in classic Daniel Cormier-fashion. Then, once Correia was against the fence, Rousey ripped into her body with a knee, causing the Brazilian to drop her hands and absorb the knockout punch (GIF).

The most important criticism of Rousey’s boxing — which can be laid at the feet of her controversial coach, Edmond Tarverdyan — is that it hasn’t been built to fit her Judo game. The first thing an excellent clinch fighter should be taught is how to safely enter the clinch, yet Rousey rarely shows any set ups into that area. Instead, she rushes forward with her face, which is precisely what Holm capitalized on so viciously.

In short, Rousey’s entire striking game lacks a focus on defense. She doesn’t often move her head at any point, and on the unusual occasion in which she’s not going full bore on offense, Rousey will back straight up. To put it simply, she’s very hittable.

Holm was the first fighter who really committed to maintaining range and denying the clinch … and it proved to be a perfect foil.

Rousey earned a bronze medal in Judo in the Olympics, and her ability to throw people through the air has transitioned into MMA brilliantly. “Rowdy” adores hip tossing her opponents through the air, though she’ll also chain together trips and other throws as necessary (GIF).

For the most part, Rousey has had little trouble throwing her opponents through the air. However, earlier in her career, Rousey did have to switch off from her usual hip throw and build up to other takedowns.

This is only the case when Rousey’s opponent remains composed and doesn’t give up an immediate takedown. In that situation, Rousey has to work a bit harder and rely on her transitional ability. Chaining together inside and outside trips, Russian arm drags, and other throws, Rousey rarely fails to drag her opponent to the mat (GIF).

However, many of Rousey’s opponents essentially give her the takedown. Either by rushing forward in an attempt to land a big punch or hastily retreating away from the clinch, her opponents are well off-balance in poor position to defend any takedown, yet Rousey has yet to touch her foe. Then, depending on which extreme her opponent is reacting with, Rousey simply chooses a trip or throw that capitalizes on her foe’s misplaced momentum.

For example, Miesha Tate was one of her division’s best wrestlers, and she did a nice job nullifying Rousey’s trips and throws in their second fight when she slowed down and defended. However, whenever she committed to charging in, Tate would end up flying through the air.

Since most fighters are absolutely terrified of locking up with the champion, Rousey has rarely had to prove her takedown defense. Again, “Cupcake” Tate is the exception. There were several times where Tate looked for a shot, but Rousey defended masterfully with her Judo. Usually, Rousey simply overhooked Tate’s arm and tossed her to her back.

The last fight with Holm showed that Rousey is pretty restricted to her favorite throws and trips. Holm was able to stay patient and stall her way out of positions, often using two-on-one control to simply prevent the throw or framing on her opponent’s hips. By waiting for her moment to circle and explode rather than rushing, Holm was able to limit Rousey’s effectiveness to a single takedown.

Rousey rips apart arms. That’s how she became a champion. There’s a lot that goes into her arm bar technique, and it’s worth mentioning that Rousey has developed the rest of her submission game alongside the highly talented Cesar Gracie team.

It’s no accident that Rousey finds herself in position to attack with the armbar so often, as she’s always baiting the submission. Her beloved hip toss gives up the far side underhook, which is usually a very bad thing. Against fighters who are not named Rousey, that usually allows the bottom person to scramble into a better position if not reverse entirely.

In most exchanges, the fighter with the underhook wins the scramble just about every time. Opposite Rousey, it’s the quickest way to fall into a submission.

Once her opponent begins to rely on the underhook, Rousey will clamp down with an overhook and throw her legs over for the arm. Again, the threat of an armbar is usually a fair trade for top position — seriously, how often are armbars finished in MMA by people other than Rousey? — but it’s the most dangerous position in the world when facing Rousey.

While transitioning through dominant positions, it’s fairly common for her opponent to give up her back in an attempt to stand or escape the constant ground strikes. Once more, Rousey’s raw aggression shines through, as she immediately jumps on her opponent’s arm.

Again, most fighters — male or female — simply lose top position when trying techniques like this, but Rousey is one of the best. That said, Holm was able to shrink out when Rousey attempted this exact technique, but it was a perilous situation for “Preacher’s Daughter” nonetheless.

Once in the actual armbar, Rousey is able to excellently deal with her opponent’s grip and defenses. That’s the technique I analyzed in this week’s highlight, which can be seen below.

In her second battle with Tate, Rousey used some non-armbar related submissions. After Tate’s sole takedown, Rousey pushed Tate’s arm through her legs and managed to lock up a triangle. Though Tate’s hand position prevented a finish, it didn’t stop Rousey from battering Tate within the hold.

Defensively, Rousey appears to be in complete control on the mat. However, as mentioned, she commonly uses Judo throws that give up an underhook when she lands. Usually, that leads to an armbar for “Rowdy,” but it can also allow her opponent to escape out the back door. Both Tate and Liz Carmouche managed to secure Rousey’s back briefly. As mentioned, Holm was also able to slip out the back door and return to dominating the stand up.

Rousey defended without much issue, but it’s a risky part of her game, and one that’s unlikely to change because of its integral nature.