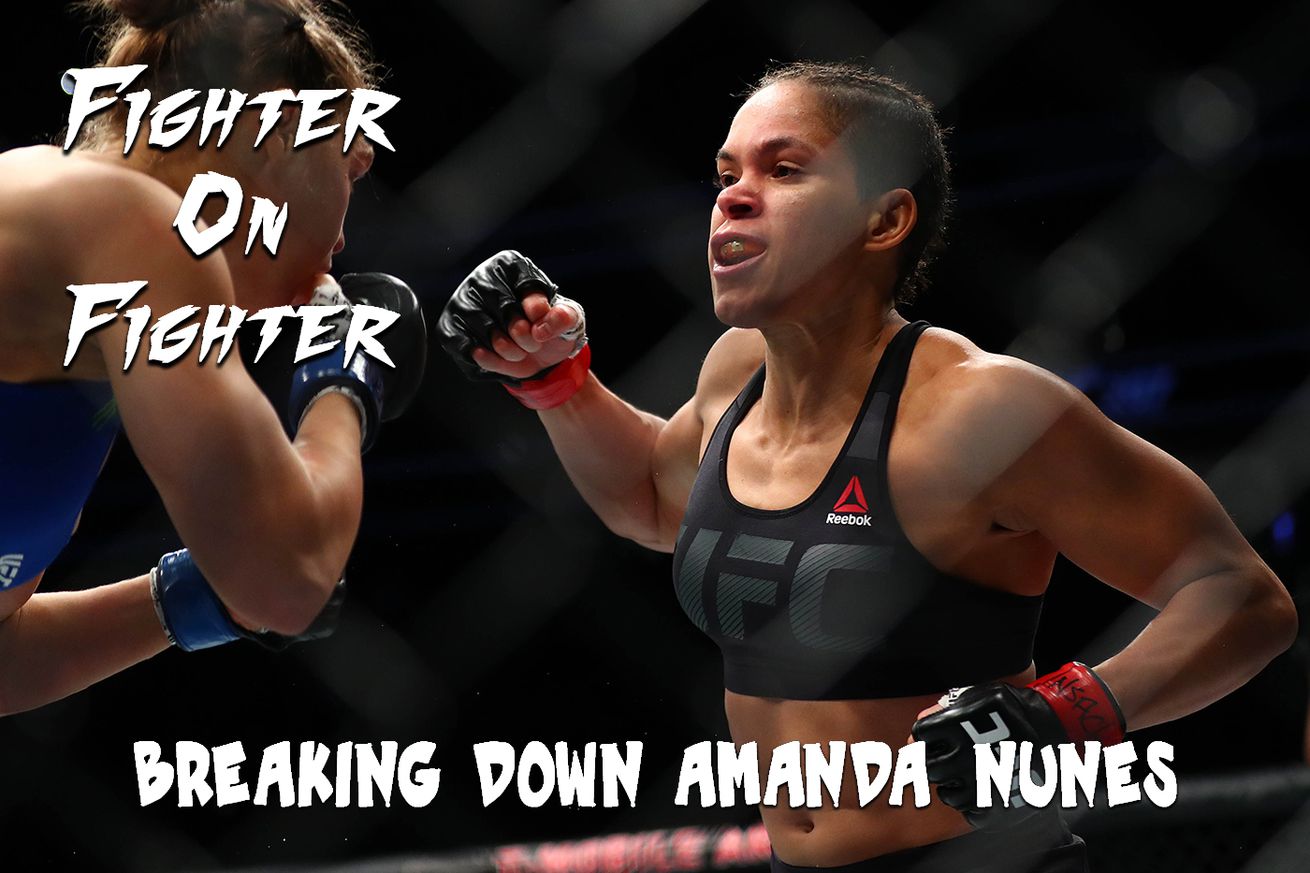 It’s easy to forget that less than three years ago, Nunes was a fairly pedestrian 9-4 fighter who gassed out and got finished when facing the division’s best.

Nunes has improved a lot, managing her energy more efficiently and sharpening the individual weapons in her game. Nowadays, she’s not a wild but dangerous brawler with good jiu-jitsu; she’s a sharp kickboxer with a deadly ground game. Simplicity is still the name of the game, but Nunes has managed to decimate the two most accomplished women’s Bantamweights in history in a grand total of four minutes.

It’s working for her, so let’s take a closer look at her skill set:

A major part of Nunes’ success inside the Octagon has come from her natural size and athleticism. She’s bigger, stronger and moves with more fluidity than most of her opponents. In addition, she’s able to make great use of the mixed martial arts (MMA) basics because of it.

On her feet, that translates into simple but powerful combinations and crisp strikes. She relies heavily on the jab and cross — she threw almost nothing but in her recent domination of Rousey (GIF) — but the numerous applications of the one-two combinations are the focus of her technique highlight.

Thanks in large part to the aforementioned one-two combination, Nunes makes pretty good use of her length. In her last fight, Nunes avoided punching into the clinch, something of a previous issue.

Nunes has a long, sharp jab. This was most notable opposite Miesha Tate, who was very determined to look for the takedown. Nunes snapped her head back and bloodied her up with the jab, forcing her opponent to take ugly shots from far away (GIF).

Check out that gif again and count the one-twos.

Nunes relies on the cross often, even throwing the punch without setup to solid results. She has real power in the punch, and it’s a potential finisher in each of her fights. Opposite Tate and Rousey, she did a nice job of keeping her feet under her while firing the right, which helped prevent either woman from ducking into a clinch or takedown. In her bout with Shevchenko, Nunes did good work with her cross to the body, which is something to watch for in the rematch.

The other main tool of Nunes’ distance kickboxing is the right low kick. She often throws it without setup, which is an issue, but the kick packs enough power that her opponents are often able to capitalize. When landed cleanly, she’s able to spin her opponent around or sweep a Southpaw to the ground. Plus, her leg kicks were strong enough to break down and finish Shayna Baszler.

Lastly, Nunes does nice work in the clinch. Her strength allows her to yank around her opponent from the collar tie without much difficulty, helping her set up knees. Additionally, a failed trip can be converted into offense against an off-balance opponent.

Nunes is a Judo brown belt with great physical strength, so it makes sense why clinch work tends to come easily for her. It’s been forgotten lately, but Nunes’ grappling is just as dangerous as her kickboxing, as Nunes is a really exceptional top player.

In the clinch, Nunes very often looks to trip her opponent. While fresh and at her sharpest, Nunes will aim for small foot sweeps or a subtle outside trip. This is where she does her best work, as Nunes definitely has the technique to land these takedowns. Alternatively, Nunes can dig her underhook deep into a body lock and lock to force her foe to the mat, which is most effective when chained with one of the aforementioned trips.

As Nunes grows tired, her takedown attempts become more desperate. When that happens, she’s far easier to reverse. Aside from that situation, she’s rarely taken down.

Once on top, Nunes is really devastating. She does an excellent job of gaining posture, as she really avoids sitting back on her knees even while in guard. Because of that, she’s proven to be effective from all positions with her ground strikes and does a lot of damage from there.

In guard, Nunes quickly finished Sheila Gaff in her Octagon debut. After forcing her foe to the mat, Nunes did not allow her opponent to control her posture, stepping up onto one foot and framing with her arm. Once that space was created, Nunes was able to drop hard elbows and end the bout (GIF).

Opposite Cat Zingano, Nunes showed off her full ground and pound display, particularly in the first round. From guard, Nunes dove in with heavy right hands and postured within the guard admirably. She also stepped up to a leg in half guard to deliver hard elbows, a frequent technique for the Brazilian (GIF). Finally, when able to advance past her opponent’s guard, she did an excellent job of controlling while landing hard shots.

A Brazilian jiu-jitsu black belt, Nunes has finished three of her opponents via submission. Each of those submissions came via rear naked choke, and there’s a definite pattern to how Nunes secures that hold.

After rocking her opponent, Nunes does an excellent job of jumping into back mount and looking to finish with the submission. This was the case in her bouts with McMann and Tate, but the latter one in particular showed some nice technique.

From turtle, Nunes secured wrist control on the far arm — a devastating strategy that is becoming more and more common — and stood over her opponent. Tate was unable to do much but absorb punches from this spot, so Nunes really forced her to give up the hooks. With wrist control and hooks, Nunes was able to easily hip in and flatten her opponent out. That’s the worst position in the sport, meaning the choke was all but locked up at the point (GIF).

It’s also worth mentioning that Nunes does a very nice job of cutting through her opponent’s guard. She’s able to do so effectively because of her posture, as her opponents have a difficult time maintaining a tight guard while eating hard shots. With the guard loose, Nunes will methodically move into half guard and then mount, delivering hard punches and elbows the whole time.

Nunes’ grip on the strap tightened significantly when she dispatched Ronda Rousey in short order. In this bout, Nunes has another chance to prove her growth, as Shevchenko came closest to defeating her of anyone in Nunes’ current win streak. If she can take victory over “Bullet” a second time, there’s a real chance that Nunes holds onto the belt for a very long time.

Andrew Richardson, a Brazilian jiu-jitsu purple belt, is an amateur fighter who trains at Team Alpha Male in Sacramento, California. In addition to learning alongside world-class talent, Andrew has scouted opponents and developed winning strategies for several of the sport’s most elite fighters.