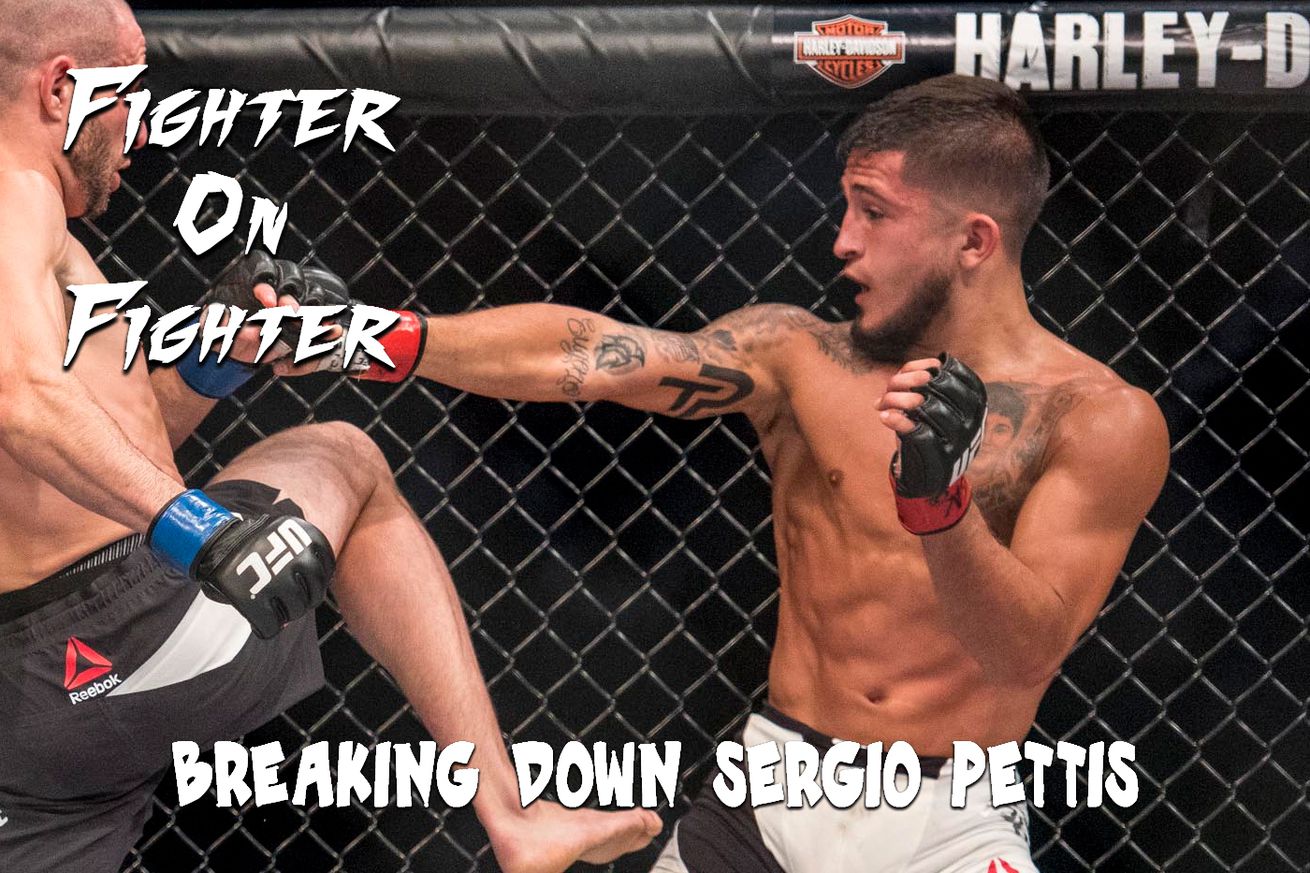 When Pettis first entered UFC, he was just 20 years old. Already remarkably well-rounded, Pettis won his debut in strong fashion, but lost to a more experienced foe next time out. He bounced back with a pair of wins before deciding that Flyweight was a more natural home. Though his Flyweight career got off to a rough star in the form of a come-from-behind knockout loss, Pettis has since rebounded with a trio of solid wins. “Phenom” is looking better than ever, ready to take the final step to become a contender.

Pettis is a second-degree black belt in Taekwondo and a black belt in kickboxing under Duke Roufus as well. Though he occasionally has some defensive lapses, Pettis has proven to be a well-rounded and fairly powerful kickboxer. Overall, Pettis likes to stalk his opponent, draw them out, and counter. As he moves forward, Pettis does solid work with his kicks. He’s a reasonably large Flyweight and makes good use of that size, attacking from a range that not everyone can match.

Working from both stances, Pettis throws lots of round kicks in very Taekwondo-fashion. He doesn’t usually step into the kick; they’re fired directly from his stance — whichever one — and have a nice snap at the end. Another Taekwondo staple in Pettis’ game is his ability to hop backward and fire a kick right when he lands, which ties into his pull and counter game well. Opposite Chris Cariaso, for example, Pettis land scored with a very nice sequence from Southpaw where he hopped back from a combination, flicked up a lead leg (right in this case) high kick, and landed cleanly as Cariaso advanced.

Pettis primarily targets the head and body, and he’ll occasional mix side kicks into his pressure game. One of his most unique habits is to throw high kicks from close distances. Kicking high on the break is somewhat common — though still underutilized — but Pettis does it better than most, seeking to kick any time he can create a small amount of space in the clinch (GIF).

While Pettis does use his kicks well to advance and cut off the cage when necessary, he does much of his work behind the jab. By establishing his jab, Pettis makes full use of his range. He’s able to work behind the jab in combination and set up kicks. Most importantly, Pettis can jab and step back, allowing whatever his opponent throws to miss before “Phenom” steps back in with his counter.

For Sergio Pettis’ technique highlight, we took a look at his jabbing and pulling opposite a specific opponent in John Moraga.

In terms of boxing, Pettis doesn’t do anything all that complicated. He feints his jab well, mixes up the timing, and lands it effectively. Once that happens, his long one-two combination and pull counters will begin to find a home. Occasionally, he’ll mix it up to slip inside the pocket and come back with a hook instead.

Defensively, Pettis has long periods where he looks real sharp. He’ll manage the distance perfectly and keep his head moving when he’s at risk. That said, he’s somewhat prone to mental lapses. He seems to just forget that his opponent is an offensive concern, watching his work and standing still with his head high. It’s happened less over time, but it’s definitely still something to watch out for.

Pettis is a far more active wrestler than his older brother, Anthony Pettis. In his three wins at Flyweight, Pettis scored an impressive seven takedowns, and his defense stands at a respectable 71 percent success rate.

Offensively, Pettis is pretty simple. It’s all about the double leg, and there’s really nothing complicated about it. Pettis controls range very well and remains mobile in his stance, giving him lots of reads on his opponent and keeping him in good position to shoot at any time. Most of the time, Pettis simply waits for a moment where his opponent over-extends or is out of position and drops down into a quick shot. It can be reactive or of his own initiative. It’s not an absurdly powerful shot or followed up with lots transitional wrestling, but if he’s taking down a fighter in a kickboxing stance who’s off-balance, so it doesn’t have to be.

Timing is the most important thing.

Defensively, Pettis has done a very nice job avoiding takedowns. Again, much of his success comes from the aforementioned range control and balance. Pettis keeps his back off the fence and feet moving, which denies the majority of mediocre shots before they even happen.

Opposite a well set up shot, Pettis still does well to get his hips back or quickly turn a corner. He’s not necessarily an impossible fighter to take down, but Pettis generally does everything pretty well and makes it difficult for his opponent.

A jiu-jitsu purple belt, Pettis has a trio of wins via tapout. None have come inside the Octagon, but Pettis has nevertheless shown some solid grappling, mostly from his back.

Pettis keeps a very active guard. If his opponent is focused on holding him down and thus working from their knees, Pettis will be constantly attacking with arm bar and triangle attempts. Often, this causes his opponent to stand up and pull away from the submissions. Once that happens, Pettis can throw an upkick and scramble to his feet.

Tying into that is the pendulum sweep, which Pettis used to stand up opposite Matt Hobar. As Hobar stood over Pettis, Pettis grabbed his ankle and blocked his far knee with his left foot. When Pettis kicked Hobar’s hip with his right leg, both of Hobar’s legs were tripped up, causing him to lose balance and allowing Pettis to scramble up (GIF).

Lastly, it’s worth-mentioning that Pettis will often jump for the high-elbow guillotine while defending takedowns. He hasn’t landed it yet, but Pettis has also used the choke to scramble back to his feet.

This is the most high-profile fight of Pettis’ career, and it’s coming against a very reasonably matched opponent. Besides his skill, it will also test Pettis’ habit of making mistakes and giving away key positions or easy punches, as Moreno is a skilled opportunist. If he can make it four straight wins, he’s right in the title mix as a possible contender after Demetrious Johnson faces off with Ray Borg.

Andrew Richardson, a Brazilian jiu-jitsu purple belt, is an amateur fighter who trains at Team Alpha Male in Sacramento, California. In addition to learning alongside world-class talent, Andrew has scouted opponents and developed winning strategies for several of the sport’s most elite fighters.