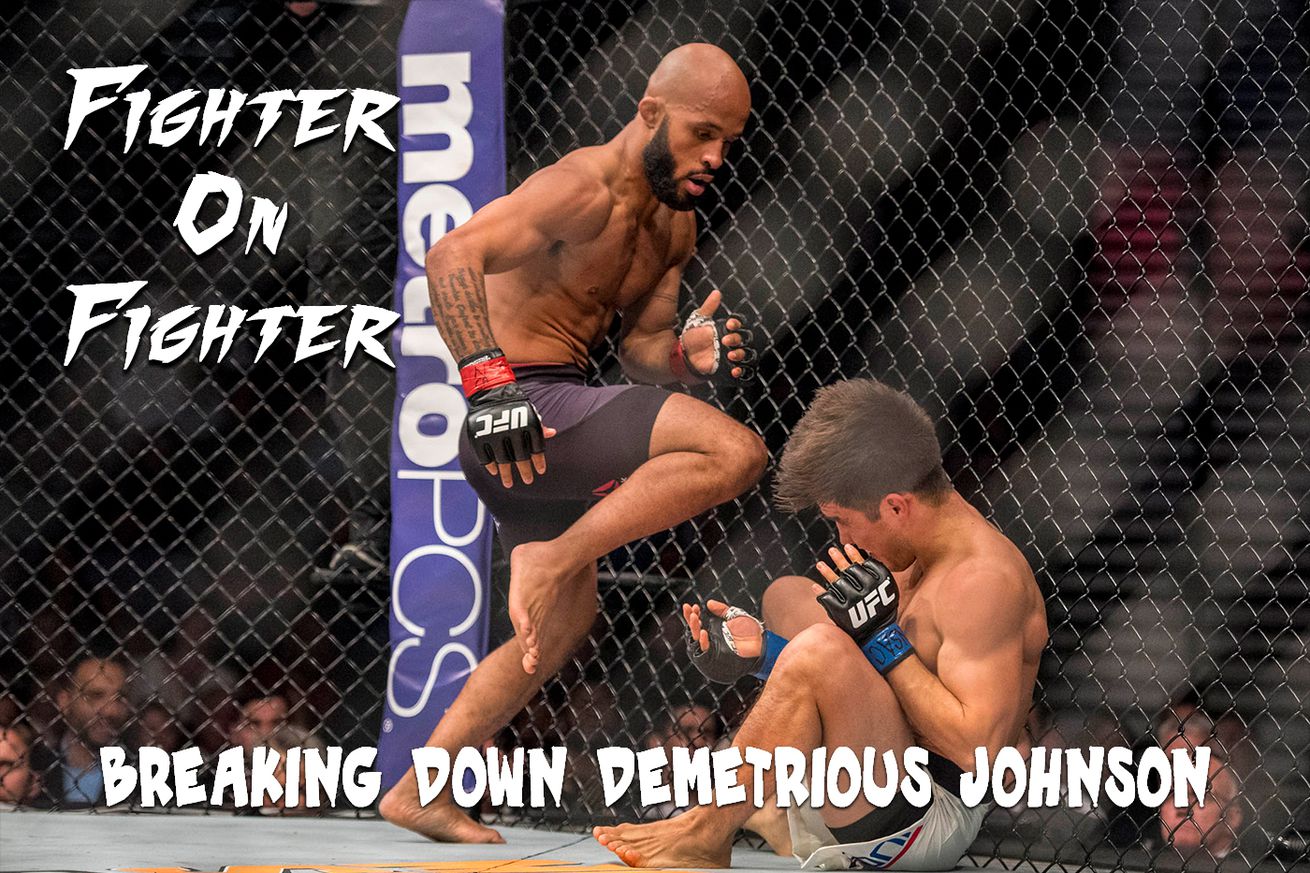 Johnson has never seemed more invulnerable than right now. Last year, UFC hosted an entire season of The Ultimate Fighter (TUF) filled with regional champions to create a new title challenger. The result was Tim Elliott, who really exceeded expectations in his fight with “Mighty Mouse.”

However, he still lost four of the five rounds.

Now, Johnson faces off with another experienced contender who few expect to have much of a chance. Let’s take a closer look at the skill set that makes Johnson so dominant:

Part of the reason Johnson is such a difficult man to prepare for is his adaptability. On the feet, he works well from both stances, switching often even in mid-combination. Furthermore, he’ll switch his approach as necessary, either relentlessly pressuring his foe to exhaust them or carefully working from the outside.

One of the most important parts of Johnson’s game is his sense of distance. Whether he’s looking to step in with a combination or shoot a reactionary double leg, Johnson is very rarely too far out or too close.

This, in large part, is because of his excellent footwork. Between all the stance shifting, Johnson is always at the perfect distance, depending on his gameplan for that fight. For example, he worked the outside quite well in both of his matches with Joseph Benavidez, doing his best to make “Beefcake” miss and land his own counter punches (GIF). Alternatively, Johnson had not interest in being at the end of John Dodson’s ferocious punches, so he did his best to pressure and jam him into the fence. With his back to the fence, Dodson was more vulnerable to takedowns and punches, and Johnson happily blended the threats of both to stymie his opponent.

When working from distance, Johnson is very active with his long range strikes. He’ll pump out a jab from both stances, commonly doubling or tripling up on the strike. He’s also quite active with his kicks, as he’ll throw out plenty of quick low kicks to measure distance early on. Once Johnson has established his jab and gotten comfortable with the range, he’ll begin to open up with his combinations (GIF). The champion’s combinations are varied and often extensive, as Johnson will switch stance in the middle of his attack. Plus, Johnson will make his offense even more unpredictable by suddenly mixing a kick into his combination.

Because of the inherent risk of switching stances while punching and the length of his combination, Johnson can be vulnerable to counter punches. If he’s caught with a shot between stances, he’s in poor position to absorb the blow. Johnson is aware of this risk, and he does several things well to minimize it. For example, he never backs straight out after landing his shots, always exiting at an angle. He often covers his exit with a punch, such as jabbing or occupying one of his opponents hands with a hook while he circles away.

In addition, Johnson is very good at stuffing his opponent’s attempts to counter by forcing a grappling exchange. Earlier in his career, Johnson would frequently end his combinations with double leg takedowns, which obviously makes it difficult for his opponent respond with punches. While he’ll still do that, he’s been closing in with the double-collar tie more often (GIF), and he’s gotten very dangerous from that position.

When Johnson’s opponents back away from his punches, he’s very good at finishing his combination with a sharp kick. This is a common and very effective strategy, as Johnson can catch his opponent circling into the strike and make it even more powerful. Perhaps the biggest improvement to Johnson’s overall game has been his clinch work. It’s now a very dangerous asset for him, as he’s very active with his knee strikes while in close and is always threatening the takedown.

This improvement was first noticeable in his first bout with Benavidez. After being pushed into the fence by the wrestler, Johnson delivered some very hard knees to the mid-section. These knees seem to tire his opponent and definitely helped Johnson get off the fence. Since then, Johnson has become far more aggressive in seeking out the clinch on his own. It began in his first bout with Dodson, as he hung on his opponent’s neck and wore him down in the clinch. Using the front headlock and Muay Thai plum, Johnson landed heavy knees and plenty of elbows to his fatiguing opponent.

More recently, Johnson’s bout with Ali Bagautinov really showed off his complete clinch game. When the Dagestani fighter looked to push his opponent into the fence and rough him up, Johnson would use the double-collar tie to circle off and land knees (GIF). Once he realized that Bagautinov had no real answer for that position, Johnson began pushing into the clinch on his own and working his opponent over with knees.

Johnson really mastered the clinch by the time he faced Henry Cejudo, finishing the Olympian with knees from that position. Once again, his opponent — a strong wrestler — drove into the clinch, but it was Johnson who went on the offensive. He quickly secured his collar-tie and began digging into Cejudo’s body, which soon opened up a hard knee to the jaw. Cejudo wobbled backward, and a couple follow up punches — plus a knee to the body — sealed the deal (GIF).

Years ago, Johnson’s sole weakness was his takedown defense, as more experienced and often bigger fighters were able to control him. Since winning the title, Johnson’s wrestling ability has skyrocketed, as he’s now nearly impossible to takedown and lifts just about everyone off their feet when he tries.

Johnson’s technical wrestling ability and general explosiveness are well-above average, but it’s the champion’s measure of distance — and thus timing — that really separates him from most wrestlers. His excellent footwork keeps him in position to level change and shoot at all times. Johnson almost never takes a poor shot, as he’s always dropping under an opponent coming in or distracting him with a combination.

Johnson’s double-leg takedown is quite versatile (GIF). He’s able to blast his opponent from his feet with ease, in part because of his unexpectedly powerful drive. While he prefers to shoot in the center of the Octagon — where his opponent cannot nullify his speed advantage by leaning into the cage — Johnson is also able to finish his shots against the fence. Against opponents who prefer to work from the outside, such as Dodson and Kyoji Horiguchi, Johnson will switch it up and grind his foe into the fence.

Defensively, Johnson is so rarely out of position on the feet that he’s a tough man to take down. Elliott is the most recent man to find the occasional hole in his wrestling defense, but that required two fairly unique traits: Being a whole lot bigger than the champion, and being so awkward and aggressive that Johnson was at times caught off-guard.

It’s also important to note that Johnson’s defense in the clinch is much better. After securing at least a single collar tie, Johnson will use his forearms to push his opponent away and prevent level changes. In addition, his knees to the body are excellent at deterring his opponent’s wrestling. If the initial shot fails, driving up into the clinch is no longer a particularly viable path to the takedown for his foes.

Johnson has never been bad at jiu-jitsu or easy to submit, but he’s come a long way in being offensive on the mat. After landing one of his takedowns, Johnson is now quite proactive about looking to pass and submit, which has helped him finish fights more frequently.

The most important part to securing a finish from top position is actually passing guard. To that end, Johnson is very smooth at systematically moving through his opponent’s guard. First, he’ll wait for his opportunity to step over a leg into half guard. Once he’s there, he’ll again bide his time until he can cut his knee through the guard and pass into side control. Outside of the occasional rear-naked choke attempt, Johnson likes to hunt for his opponent’s arm. More specifically, he looks to finish the far side armbar or kimura, which are the techniques I analyzed in this week’s highlight.

Finally, Johnson has proven to be a very difficult man to submit. Back at Bantamweight, he survived a large number of Miguel Torres’ crafty holds, as well as Dominick Cruz’s heavy back mount and choke attempts. At Flyweight, Johnson somehow survived a tight mounted guillotine opposite Joseph Benavidez — to my memory, the only person to escape Benavidez’s death grip after the choke was that deep — and then used a heel hook attempt to return to his feet.

Lastly, Johnson’s defensive jiu-jitsu was actually tested quite a bit in the first round of his bout with Elliott. Elliott’s lanky frame and willingness to dive onto submissions allowed him to lock in a tight guillotine and eventually d’arce choke, but Johnson kept his composure, fought hands and never allowed his foe to get into perfect position to finish.

He was in danger, but the champion defended with great intelligence.

At this point, Reis is just another name for Johnson to add to his resume. Flyweight is devoid of any truly big name fighters who have yet to face “Mighty Mouse,” which means each title defense becomes a numbers game more than anything else. There’s talk of him facing Bantamweight kingpin Cody Garbrandt in the near future, but anything short of a super fight like that will continue Johnson along his — admittedly great — path more than really propel him forward.