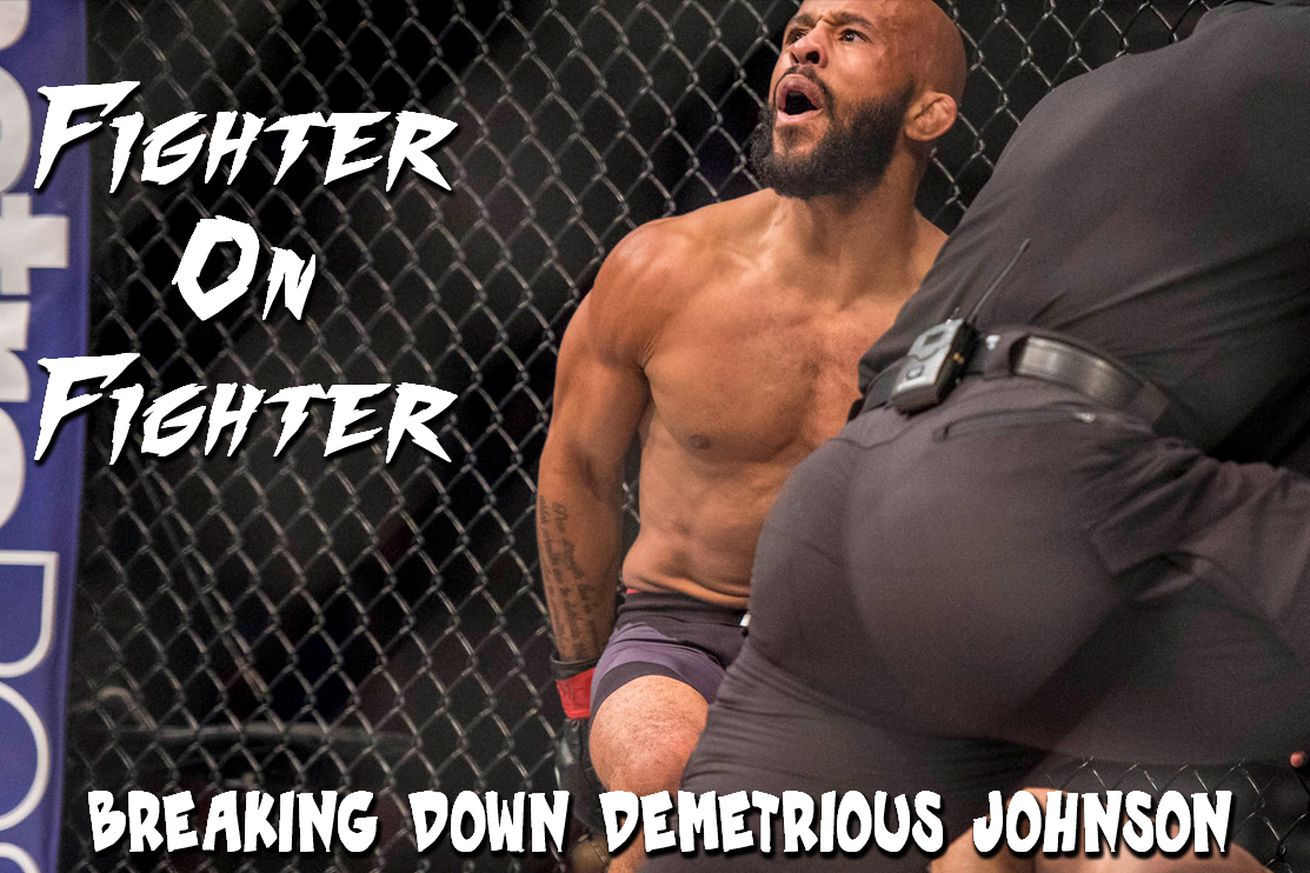 What more can really be said about “Mighty Mouse?” He’s completely dominated the vast majority of his opponents and any of his close contests have since been avenged. Johnson has defended his title an impressive eight times across four years, and he only seems to be getting better. Ahead of his match up with either Tim Elliott or Hiromasa Ogikubo, which will be determined at the conclusion of TUF 24 this mid-week, Johnson will look to defend his title once more.

Let’s take a closer look at the champion’s skill set:

Johnson is a difficult man to really get a read on in a kickboxing match, largely because he switches up his style so much. Johnson is a consistent switch-hitter — often mid-combination — and will pressure his foes or maintain distance depending on his game plan, which further muddies the water.

One of the most important parts of Johnson’s game is his sense of distance. Whether he’s looking to step in with a combination or shoot a reactionary double leg, Johnson is very rarely too far out or too close.

This, in large part, is because of his excellent footwork. Between all the stance shifting, Johnson is always at the perfect distance, depending on his game plan for that fight. For example, he worked the outside quite well in both of his matches with Joseph Benavidez, doing his best to make “Beefcake” miss and land his own counter punches (GIF). On the other hand, Johnson pressured Ali Bagautinov into the fence and kept him there, peppering the Sambo specialist with punches and kicks from the edge of his range.

When working from distance, Johnson is very active with his long range strikes. He’ll pump out a jab from both stances, commonly doubling or tripling up on the strike. He’s also quite active with his kicks, as he’ll throw out plenty of quick low kicks to measure distance early on.

Once Johnson has established his jab and gotten comfortable with the range, he’ll begin to open up with his combinations (GIF). The champion’s combinations are varied and often extensive, as Johnson will switch stance in the middle of his attack. Plus, Johnson will make his offense even more unpredictable by suddenly mixing a kick into his combination.

Because of the inherent risk of switching stances while punching and the length of his combination, Johnson can be vulnerable to counter punches. If he’s caught with a shot between stances, he’s in poor position to absorb the blow. Johnson is aware of this risk, and he does a number of things well to minimize it. For example, he never backs straight out after landing his shots, always exiting at an angle. He often covers his exit with a punch, such as jabbing or occupying one of his opponents hands with a hook while he circles away.

In addition, Johnson is very good at stuffing his opponent’s attempts to counter by forcing a grappling exchange. Earlier in his career, Johnson would frequently end his combinations with double leg takedowns, which obviously makes it difficult for his opponent respond with punches. While he’ll still do that, he’s been closing in with the double-collar tie more often (GIF), and he’s gotten very dangerous from that position.

When Johnson’s opponents back away from his punches, he’s very good at finishing his combination with a sharp kick. This is a common and very effective strategy, as Johnson can catch his opponent circling into the strike and make it even more powerful. Perhaps the biggest improvement to Johnson’s overall game has been his clinch work. It’s now a very dangerous asset for him, as he’s very active with his knee strikes while in close and is always threatening the takedown.

This improvement was first noticeable in his first bout with Benavidez. After being pushed into the fence by the wrestler, Johnson delivered some very hard knees to the mid-section. These knees seem to tire his opponent and definitely helped Johnson get off the fence. Since then, Johnson has become far more aggressive in seeking out the clinch on his own. It began in his first bout with Dodson, as he hung on his opponent’s neck and wore him down in the clinch. Using the front headlock and Muay Thai plum, Johnson landed heavy knees and plenty of elbows to his fatiguing opponent.

More recently, Johnson’s bout with Ali Bagautinov really showed off his complete clinch game. When the Dagestani fighter looked to push his opponent into the fence and rough him up, Johnson would use the double-collar tie to circle off and land knees (GIF). Once he realized that Bagautinov had no real answer for that position, Johnson began pushing into the clinch on his own and working his opponent over with knees.

In his last bout, Johnson managed to finish the fight in the clinch. Once again, his opponent — a strong wrestler — drove into the clinch, but it was Johnson who went on the offensive. He quickly secured his collar-tie and began digging into Cejudo’s body, which soon opened up a hard knee to the jaw. Cejudo wobbled backward, and a couple follow up punches plus a knee to the body sealed the deal (GIF).

Now unanimously recognized as one of the finest wrestlers in the sport, Johnson has really worked on that area of his game. In the past, it was his weakness, as bigger foes overpowered him to the mat.

That’s no longer the case.

Johnson’s technical wrestling ability and general explosiveness are well-above average, but it’s the champion’s measure of distance — and thus timing — that really separates him from most wrestlers. His excellent footwork keeps him in position to level change and shoot at all times. Johnson almost never takes a poor shot, as he’s always dropping under an opponent coming in or distracting him with a combination.

Johnson’s double leg is quite versatile (GIF). He’s able to blast his opponent from his feet with ease, in part due to his unexpectedly powerful drive. While he prefers to shoot in the center of the Octagon — where his opponent cannot nullify his speed advantage by leaning into the cage — Johnson is also able to finish his shots against the fence. Against opponents who prefer to work from the outside, such as Dodson and Kyoji Horiguchi, Johnson will switch it up and grind his foe into the fence.

Whether in the open or against the fence, Johnson ties his double leg into the clinch very well.

Takedown defense used to be the weakest aspect of Johnson’s game. While the drop to flyweight didn’t solve all of his problems immediately, it certainly helped. Of course, Johnson’s striking development has also greatly improved his takedown defense. If his opponent cannot get into close range exchanges or force the clinch, he’s not likely to put Johnson on his back.

It’s also important to note that Johnson’s defense in the clinch is much better. After securing at least a single collar tie, Johnson will use his forearms to push his opponent away and prevent level changes. In addition, his knees to the body are excellent at deterring his opponent’s wrestling.

Johnson has focused on becoming a far more aggressive grappler in recent years. He’s long been a solid top player, but he’s now able to control and hunt for the finish.

The most important part to securing a finish from top position is actually passing the guard. To that end, Johnson is very smooth at systematically moving through his opponent’s guard. First, he’ll wait for his opportunity to step over a leg into half guard. Once he’s there, he’ll again bide his time until he can cut his knee through the guard and pass into side control.

Opposite Horiguchi, Johnson attacked the arm bar directly. After securing the far side underhook, his opponent, Kyoji Horiguchi, did very little to prevent Johnson from stepping into mount and easily spinning into an armbar (GIF).

Finally, Johnson has proven to be a very difficult man to submit. Back at Bantamweight, he survived a large number of Miguel Torres’ crafty holds, as well as Dominick Cruz’s heavy back mount and choke attempts. At Flyweight, Johnson somehow survived a tight mounted guillotine opposite Joseph Benavidez — to my memory, the only person to escape Benavidez’s death grip after the choke was that deep — and then used a heel hook attempt to return to his feet.

Unless Johnson chooses to challenge for the Bantamweight crown, each of his bouts has largely the same consequence: Johnson is just adding another successful title defense to the list. It doesn’t really matter whether it’s a proven Top 5-ranked opponent or a TUF wildcard, “Mighty Mouse” is just trying to maintain his seat on the throne.