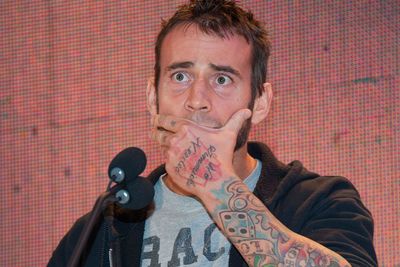 But you can’t fault the New Jersey native for getting his hopes up after promotion president Dana White attended his most recent mixed martial arts (MMA) fight, with the intention of finding an opponent for combat sports rookie and ex-WWE wrestler Phil Brooks.

If and when he gets the call, “CM Punk” is going to be in all kinds of trouble, as per Gall’s conversation with MMA Fighting:

“Honestly, man, I think that guy’s used to going into a ring and whispering to his guy, ‘Hey, let’s do a clothesline. Hey, let’s practice jumping off the ropes and this and that. I think when he gets in there and he has me coming at him looking to kill him, I don’t think he’ll be able to handle it. He’s a professional wrestler, and he’s great at that. He’s made himself a millionaire doing that. But now he’s stepping into a different world, and I think he’d be in a lot of trouble. To be honest, I just think if I hit that dude in his face hard, I don’t think he’s going to react well with that. I like to punch people in the face real hard. Sometimes I use my jiu-jitsu because that’s just where it happens to go, but I think I hit that dude, and he’s not going to like it. I really see myself banging with him a little bit.”

Sacrificial lamb … or UFC party pooper? That remains to be seen.

Punk rocked the MMA world back in November of 2014 when he announced his surprise addition to the ZUFFA roster. While there was initial intrigue as to how well he would perform inside the Octagon, the signing lost some its “wow” factor after multiple ….View full article