Home MMA News Fightweets: Have changes in the UFC announcing booth been for the better?
ShareTweet 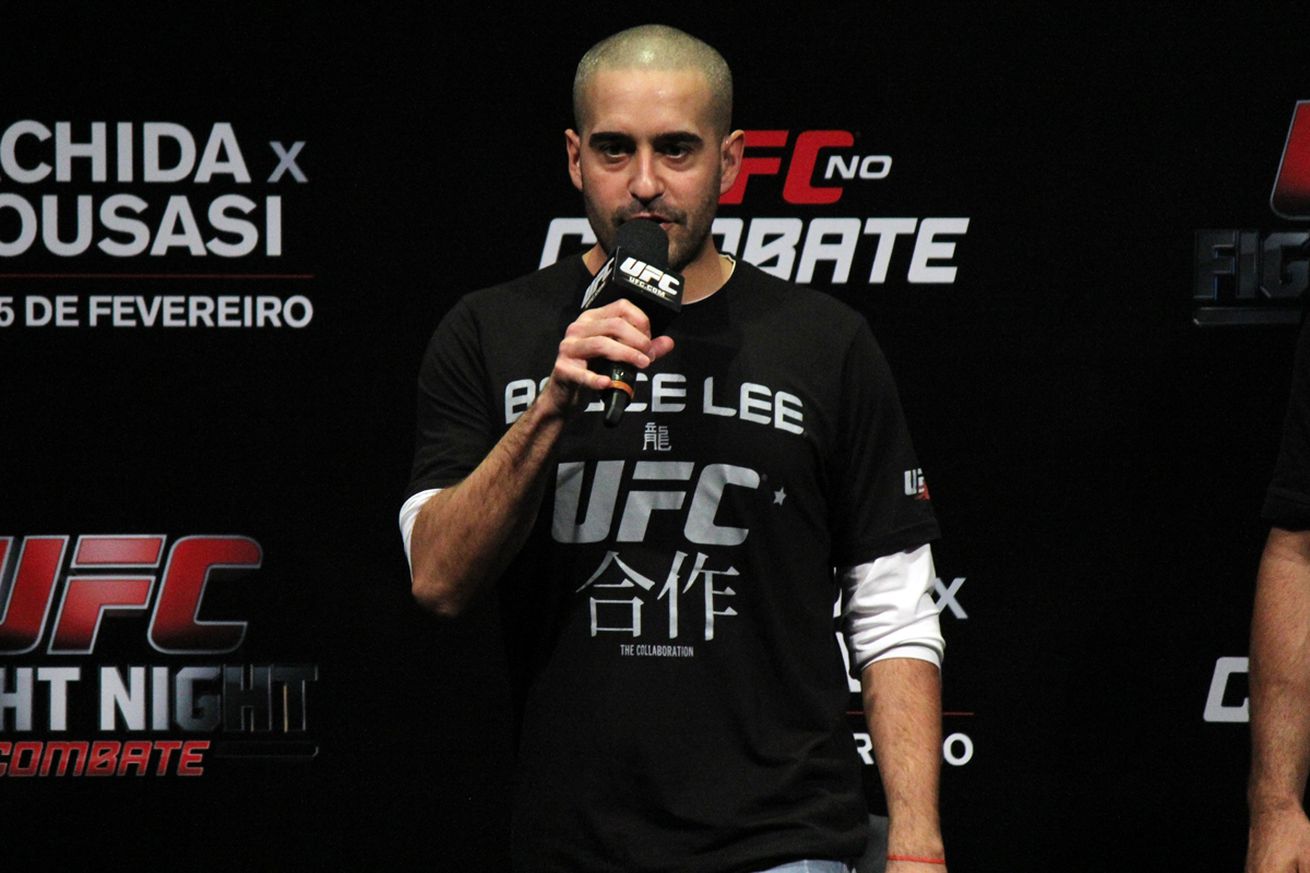 A bit of a breather this weekend after a wacky couple weeks. And with that, a chance to look back at the first real moves forward in the UFC broadcast booth in the post-Mike Goldberg era. Let’s get on with it, shall we?

Few things get sports fans crankier than the breakup of a familiar announcing team. Hell, as a Boston Red Sox fan, I never got over play-by-play guy Sean McDonough getting shoved out the door in 2005. I never accepted his replacement, Don Orsillo, even though he developed a rep as a solid announcer himself. And there was another outcry when Orsillo was let go at the end of the 2015 season, even though his replacement, Dave O’Brien, is another solid professional. So yeah, I get it.

We’ve now been through the first round of shows in the post-Mike Goldberg era. UFC 208 featured a three-man booth with Jon Anik, Joe Rogan, and Daniel Cormier. UFC Fight Night 105 was announced by Todd Grisham and Brian Stann.

I’ll start with the latter, since this is the one you specifically asked about. Grisham is a veteran announcer who has hosted SportsCenter for ESPN the past several years, with stints calling live boxing events and hosting MMA Live. Considering this was his first major MMA broadcast, and his first time doing one of those marathon FS1 broadcasts in which you can purchase, move into, and pay off a new house in the breaks in between the fights, I thought he held up pretty well. He was knowledgeable of the fighters and their histories, pronounced all the names right, and had a solid feel for when to yield to Stann’s expert commentary.

I’ve got one quibble I feel obliged to point out, though, simply because I hope he stops before this turns it into a habit: When Derrick Lewis was starting to pour it on to Travis Browne in the second round of the main event, Grisham yelled “Get out of there, Travis!”

It was a cringeworthy moment. For one thing, you don’t want your play-by-play announcer sounding like he’s favoring one fighter over another. For another, it sounded a little too WWE. And Grisham was, in fact, a WWE announcer for several years before joining ESPN. He doesn’t deserve to have that held against him, as he’s proven himself a fine all-around broadcaster in his own right. But at the same time, Grisham should guard against injecting WWE-type drama where it’s not needed.

All in all, though, Grisham’s debut was a success and something to build from.

As for UFC 208, the company tried out the three-man booth of Anik, Cormier, and Rogan. It played to mixed reviews. I don’t mind the concept of a shakeup in the booth. Goldberg and Rogan had simply gotten stale as a team. I don’t take any joy in Goldberg losing his gig, but it had been years since he brought anything new to the table. Far too often, the duo seemed on autopilot.

Anik called the broadcast “challenging” and it’s not hard to understand why. In Cormier and Rogan, he had to hand off to two dudes with big, oversized personalities who are used to taking over the room.

In Rogan’s case, I felt this was a good thing: He is one of the most incisive and astute observers in the game when he’s focused. When he’s not, you get clusters like the recent Tim Means mishap, which ended up with Rogan screaming bad info at the top of his lungs. That didn’t happen at UFC 208. Rogan didn’t have the room to go often on tangents, so his commentary so was cogent and sharp.

Beyond that, there were absolutely moments of awkwardness, moments where all three of them seemed unsure when to go and when to yield the floor to others.

If it was up to me, I’d simply make the UFC commentating combo I’ve long felt is the best, Anik and Stann, the A-team on the pay-per-views and big FOX cards and let the rest sort itself out. But I’m also not going to fault WME for experimenting and seeing how things go. Dominick Cruz takes Cormier’s place at UFC 209, and if the three-man booth concept is ever going to work, it’s going to be with guys as sharp as Cruz and Rogan bouncing their thoughts off each other.

@RuckerYeah: Is Black Beast a contender and will Browne please go away?

Derrick Lewis might or might not be a contender. But he’s a unique cat and we should accept him for who he is. He keeps winning fights that, on paper, he shouldn’t, and he’s doing it with ferocious power and equally ferocious willpower. That’s earned him the right to face one of the top guys in the division.

That’s where the problems start, because, no matter how much he tries to work on his all-around game, he’s simply never going to have Fabricio Werdum’s jiu-jitsu or Cain Velasquez’s wrestling. But, I mean, so what? There’s are plenty of guys and gals who are never going to be champion who have long, productive, lucrative careers as fun fighters. Once the crowd accepts you as a take-no-prisoners type who will fight anyone and put on exciting fights, you’re pretty much made, win or lose. Ask Donald Cerrone. Lewis is well on his way there in his own inimitable style.

As for Browne, count me among those who think that, okay, maybe he’s not exactly through, but he’s pretty close to it. People have been asking about the regression of his skills since he had to eye-poke his way to victory over Matt Mitrione. He hasn’t won a fight since. He turns 35 this summer, he’s lost three in a row and four of five, and been knocked out three times in that span. Lewis should have been his path back to victory, and he allowed himself to be goaded into Lewis’ wheelhouse.

Browne might not quite be done yet — remember we were saying that about Andrei Arlovski at one point? — but he needs changes in scenery, attitude, and approach if he’s going to turn it around.

@geemygeem: What can Bellator do over the next year to close the gap with UFC? More names, legit talent, homegrown talent, $?

I’m combining these two, since they’re interrelated. And this also comes off a weekend in which Bellator had to cancel Fedor Emelianenko vs. Matt Mitrione at the last minute, which was a huge downer right at the time the company seemed to be gaining some real momentum.

I don’t think Bellator suffers too much damage from the Fedor cancellation, so long as nothing similar happens again any time soon. Scott Coker has built up enough goodwill from fans as a longtime reputable promoter, particularly for the fans in his hometown of San Jose, for whom he’s provided so many memorable moments over the years.

They’re not going to turn on him for one mishap, especially considering it was a basic cable card and not a PPV for which they were being asked to shell out $60. It’s a bummer, sure, but all it really meant is you’re going to spend more time flipping between Bellator and the NBA All-Star weekend than you had originally planned.

With that out of the way, any progress Bellator does make this year is likely to be incremental. The bumper crop of young wrestlers are still coming up. The big-name signees have been hit-or-miss. The fact they’re able to build up to fights like Rory MacDonald vs. Paul Daley, something they couldn’t have done at the time Coker took over, shows the progress that’s been made.

And then there’s WME allowing ranked fighters to walk away. One thing we took for granted during the UFC’s Zuffa Era, regardless of how many things they did which one could question, you never doubted they were going to turn over every stone in their attempt to make sure they had the undisputed best roster in the world, even if that meant buying competitors to do it. That’s obviously not WME’s goal. Remember the outcry when the UFC cut Jon Fitch a few years ago — he was whacked after making $66,000 in a UFC 156 loss to Demian Maia, which is hardly a bad loss in hindsight — we’re basically seeing this happen on a mass level now, minus the part where Dana White trashes the guy on the way out.

So right now, it’s going to be worse to be a Rick Story, a veteran who made $41,000 to show against Cerrone at UFC 202 and would have made another $41K to win, then it is to be a 10K/10K guy. As such, there are going to be a handful of guys who slip through the cracks — letting Misha Cirkunov and Nikita Krylov, the first new light heavyweights to show a pulse in years, both walk, should be near the top of that list — who can come in and immediately improve Bellator’s cards.

@spiritinblack82: I the only one who doesn’t want to see @GeorgesStPierre fight @TheNotoriousMMA ?

No, you’re not. But there’s also no real consensus on whom he should face. Partly this is because there are so many viable options. Partly because any fight will be big: GSP could fight one of Jeff Wagenheim’s Hawaiian shirts in his return and there would be a half-million PPV buys.

I took an initial stab at GSP opponents last week, when news of St-Pierre’s return had just broken. Since then, We’ve had trainer Firas Zahabi say he’d like to see GSP have an “epic” return fight against either McGregor or Michael Bisping. That’s not something he’s going to say just for the sake of saying it. But we’ve also had St-Pierre come out and make remarks about his competitive desire, which could hint at another attempt at winning a championship.

That leaves us sort of where we’ve started: Does he want another title run, or does he want to go the megafight route? If GSP wants a belt, going after the one he never lost in the ring, the welterweight belt which has been tossed around like a live grenade in his absence, makes tons more sense than a fight at middleweight in a division full of killers. If he wants a superfight, sorry, Bisping and Anderson Silva, but a McGregor fight not only gives the UFC the blowaway fight they’re looking to put together this year, but it also makes the Floyd Mayweather talk go away.