Home MMA News Fightweets: Ronda Rousey is returning, but will her fans?
ShareTweet 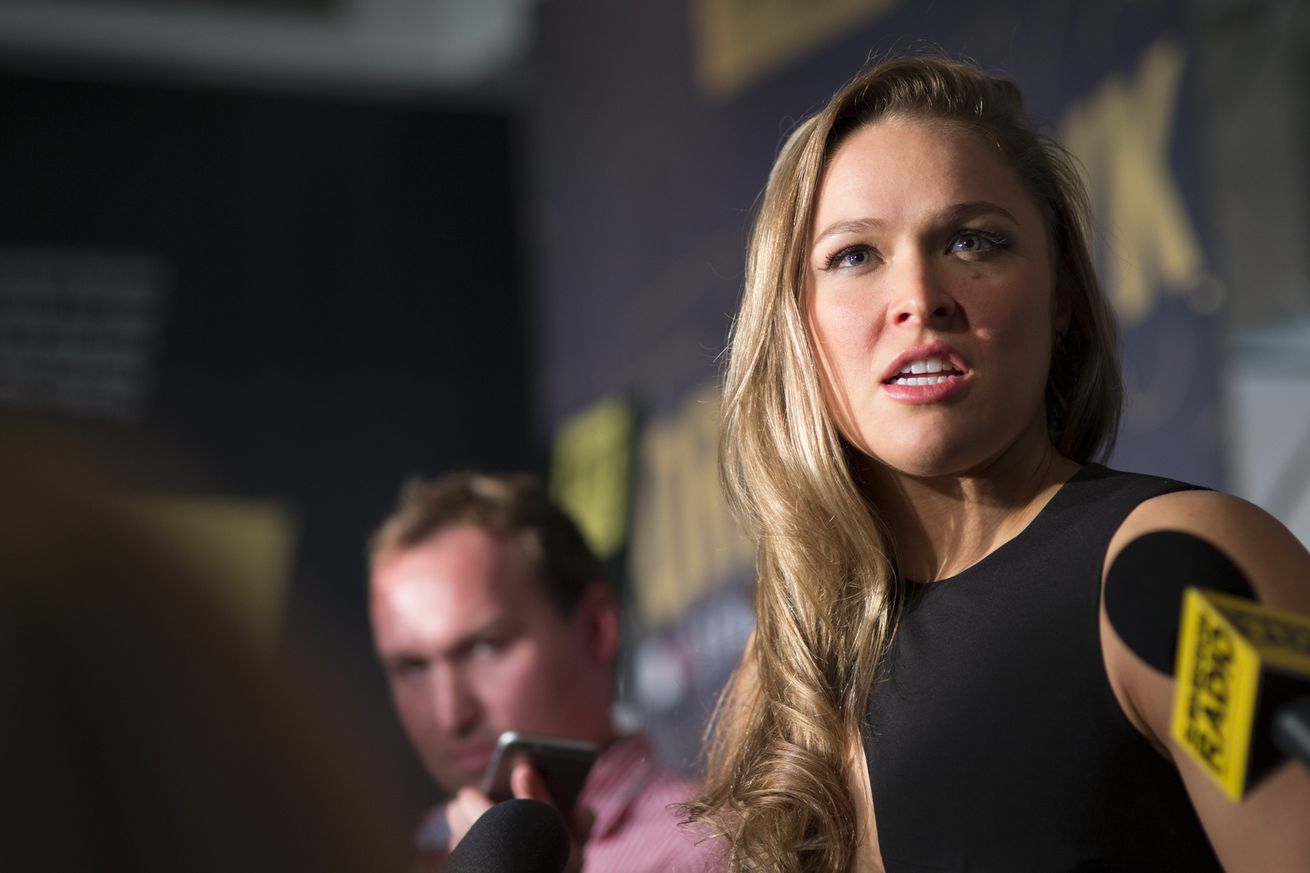 It’s Christmas Eve as this goes live, and chances are you’re either frantically traveling at the last minute or comfortably at home laughing at saps like me who are doing the former.

Anyway, after we get through the holiday weekend, UFC 207, with Amanda Nunes vs. Ronda Rousey topping a loaded show, will be front and center. So it should be no surprise that fight comprises the bulk of this week’s questions. Let’s have at it.

Do people still care about Ronda?

I can understand why people are asking this question a week out from the fight. As of now, buildup to UFC 207 just doesn’t feel like peak Rondamania (“Once in a lifetime doesn’t apply to Ronda Rousey!!!”), which took off right around the time Rousey sent Bethe Correia crashing to the canvas and then dropped off a cliff when it was Ronda’s turn to look up at the lights.

I can even understand the little things which seem to be adding up: The fact this is on a Friday night, not a Saturday, the night people are accustomed to watching fights; the fact Rousey hasn’t been doing much media (more on this later), and the bulk of the appearances she made were weeks ago; and, by the way, champion Nunes has been all but an afterthought.

Still, though, slow your roll.

First off, it’s rare a fight takes off in the general public beyond the MMA bubble more than a week in advance. People were complaining a couple weeks before UFC 190 that there wasn’t an earth-shattering buzz going into Rousey-Correia, and it ended up doing killer business. It’s rare anyone whose name doesn’t rhyme with Monor McKregor doesn’t capture the public imagination weeks out.

Maybe the naysayers are right. Maybe Rousey simply isn’t as big a draw as she once was. Maybe pulling herself completely out of the spotlight isn’t going to help matters.

But some fights simply take off in those final days before the fight. If I had to put money on it right now, I would guess that once we get to the other side of Christmas, once people find themselves getting ready for New Year’s weekend but before the college football playoff games start, and once they dig into the card a little bit and discover a ridiculously deep event, they’ll decide they’re interested in seeing Rousey’s return after all.

Maybe a late push still won’t won’t be enough to reach Rousey’s previous buyrate levels, but nor is it likely to be the disaster some seem to expect.

Ronda and the media

@MikeStraka: Yes what is ur take on Ronda shunning media. I’m all for it. Curious on ur thoughts.

Well, longtime MMA media vet Mike Straka, Ronda has the right to talk to, or not talk to, whomever she wishes.

But Nunes seemed to be on to something when she accused new UFC ownership of coddling Rousey. (That ownership, by the way, is WME, an agency which also has Rousey as a client. UFC president Dana White had to drop his gig managing Chuck Liddell and Tito Ortiz when he became a promoter because of conflict of interest concerns. Just saying). You can bet for damn sure that Conan or Ellen weren’t going to probe too deep on why Ronda stuck by Edmond Tarverdyan, or go into any depth on the loss to Holm, or ask about Cyborg, or anything else which might make her uncomfortable. That’s also her right, but it in turn bolsters Nunes’ claim.

Yet somehow I can’t shake the feeling that if UFC 207’s buy rate is down from Rousey’s previous fights, she’ll somehow decide this was all the MMA media’s fault, too.

Either way, Rousey — who won’t be making any public appearances for UFC 207 fight week save the weigh-ins — is taking a gamble. Maybe she flattens Nunes, regains the title, tops Conor’s business records, and turns back the clock about 18 months to full Rondamania.

She could also lose in a bad manner, in which case the A-list talk show hosts are going to become far less interested in booking her, and her words become far less off a must-read on the MMA sites as the machine moves on.

So this question was sent before Cris Cyborg was notified of a potential USADA violation, which changes the picture in the not-yet-launched women’s featherweight division even further. But yeah, the early returns on whether the new UFC regime has a handle on the nuances of fight promotion is certainly an open question. They’re adding weight classes, they’re handing out interim titles like Halloween candy, and they sure seem to be gunning toward ginning up short-term ratings and buy rates no without much apparent concern for the big picture.

Case in point: Okay, the UFC on FOX 22 ratings, featuring Paige VanZant and Sage Northcutt, were the best in awhile (aided in part due to half the nation being in a severe deep freeze, which put more people than usual in front of their televisions on a Saturday night). Cool. Now, does the new regime have the wherewithal to capitalize on Michelle Waterson’s breakthrough performance in front of that big audience? I’ve seen little from the UFC in the aftermath to suggest they know what to do with the Karate Hottie.

And what do we make of the notion that Nunes has been all but invisible in the buildup to UFC 207, with all the focus on Rousey, who has been in hiding most of the past year? The UFC built up Rousey-Holm last year as a battle of two equals, an intriguing style matchup, of two people with interesting backstories … and that push helped make Holm a gigantic star when she got the job done against Rousey.

In Nunes, they have an interesting character, a bubbly personality and the first openly LGBT world champion in the sport’s history, one who happens to fight like a trained killer, and left off the promos almost altogether, which was so egregious that even Joe Rogan, a face of the company, commented on it.

(I’d pin more of this on White, but if he was the one really making all the calls these days, do you think Liddell and Matt Hughes would be unemployed right now?)

So if Nunes wins, then she’ll have happened to tear through both Rousey and Miesha Tate, but with only a fraction of the rub such monumental victories should bring. Just like Waterson didn’t seem to get any love after beating their strawweight golden child. That’s what I’m worried about. That’s what makes me think WME might be thinking fight promotion is far easier than what they’ve actually signed up for. The promotional path the new UFC pursues could end up being the biggest story of 2017 and beyond.

@PhillyG4212: Did Cyborg get passed over because this test-pop was coming?

This seems like one of those chicken-and-egg questions. As with most things related to Cyborg and the UFC, everything from Cyborg’s end seems murky, and White immediately trashes anything pertaining to Cyborg. We learn little from either, including how much this may have played into the title fight decision-making process. (And I don’t profess to be an expert on banned substances, either, which is why I will direct you here for more info on that count).

What we do know is that there was a vigorous debate about whether to add a featherweight class, in which one side (of which I was on) said “Umm yeah, because Cyborg)” and the other pointed out that there was a serious lack of depth behind Cyborg. The latter side of the argument is looking pretty smart now.

On Friday, in the absence of much else to talk about as we head into the holiday weekend, a clip of White downplaying the idea of a McGregor-Nate Diaz megafight emerged. One which had the easy-to-mock line that Diaz is “a massive guy,” to boot. Sure Dana, every time I see Nate walk by I confuse him for Brock Lesnar.

But either way, let’s not forget that this comment came right after Nate Diaz proclaimed it would take a $20 million offer to even answer the UFC’s phone calls. Were we really expecting White’s public response to be “Tell you what, Nate, I’ll double that figure if you agree to the fight right now”? McGregor-Diaz 3 is a fight which will break every existing UFC business record, but it’s also not a fight which needs to be made right away, because there are plenty of other big-money fights to be made for McGregor. That’s a fight White can keep in his back pocket a good, long time, and that’s what he was signaling while trying to make Nate sound like the second coming of Andre the Giant.