Home MMA News Fightweets: What next for Amanda Nunes?
ShareTweet 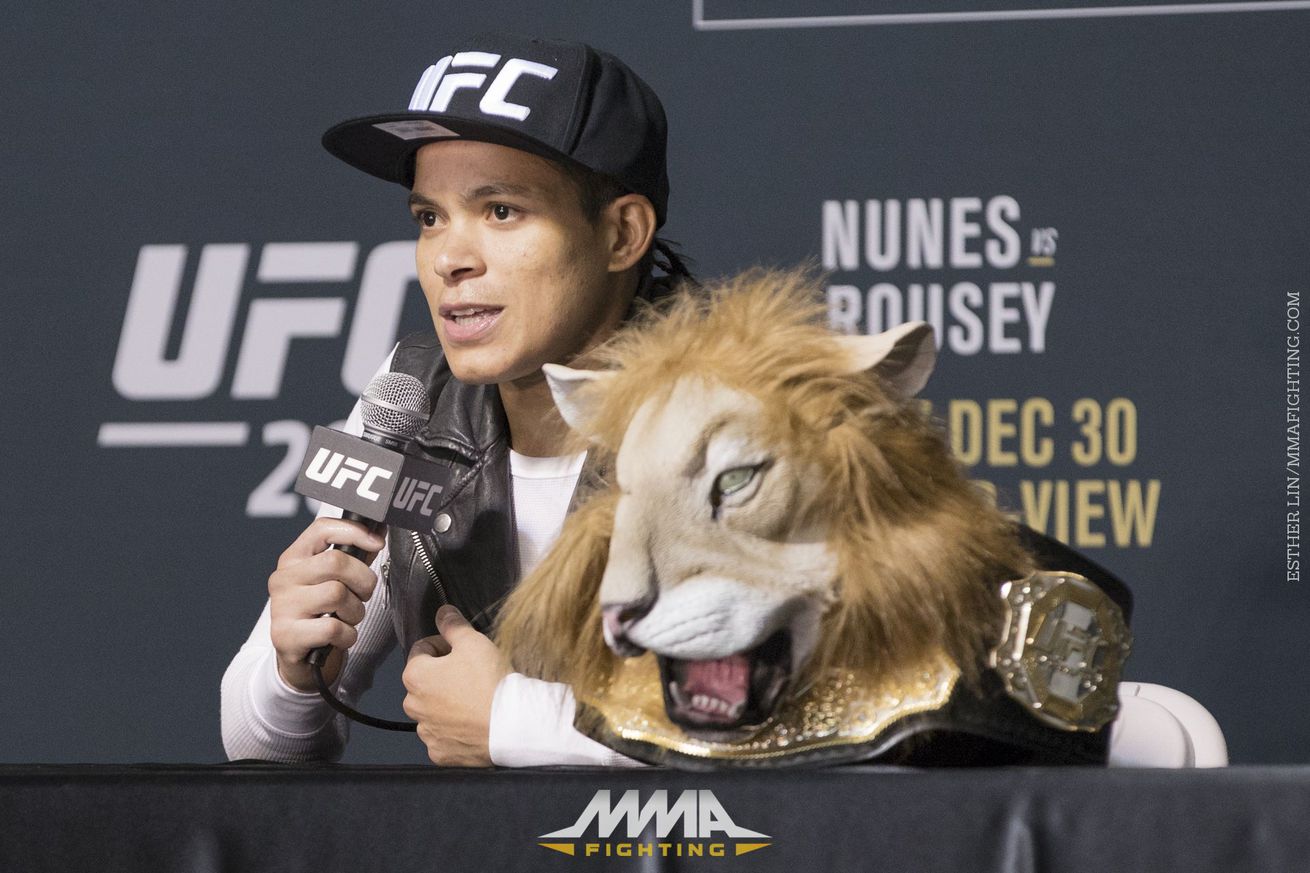 It’s been a week of UFC 207 postmortems. Most of them about Ronda Rousey. But, you know, she had an opponent in there, too. So let’s take a look at what should be next for UFC bantamweight champ Amanda Nunes and then get into all the rest.

What next for Nunes?

@MikeJBknows: Should Amanda Nunes’ next title defense be on Pay Per View or TV?

Good question. WME, who had one of their marquee clients in Rousey fighting at UFC 207, did little to promote her opponent Nunes, in the fight’s buildup. Then, after Nunes smashed Rousey in under a minute in front of what’s reportedly a million-PPV-buy audience, Nunes, the fighter in that equation who isn’t repped by WME, has barely been heard from in the aftermath.

Back when Holly Holm head-kicked Rousey halfway back to California, the Zuffa-owned UFC went out of their way to put Holm on a coast-to-coast media tour. The end result was that Holm’s fight with Miesha Tate was part of a giant-selling package at UFC 196, and her follow-up fight with Valentina Shevchenko did tremendous TV ratings for FOX.

Of course, Holm came off as the girl next door and seems easy to root for. The majority of the feedback I got on Nunes after UFC 207 was that people, even Rousey haters, were put off by Nunes’ harsh words for Rousey and her team after the fight. So it’s not like this falls 100 percent on her promoters.

Still, though, WME doesn’t even seem to be attempting to follow up on Nunes’ win, during one of those rare times the mainstream sports world has its attention on the UFC, which tells me WME still has a lot to learn about the fight business.

They paid north of $4B for this brand. If they want the company to stay in such a financial stratosphere, they better start producing stars from all over their roster, and not just giving their clients boxing-style A-side treatment.

Anyway, after mowing through Rousey and Tate, Nunes should be a bigger star than she is, but because WME has dropped the ball, and also in part because she doesn’t seem to have mastered the art of PR when she’s been given the chance, she’s not yet in a position that people are going to fork over $60 to see her at the top of the bill without a Rousey- or Tate-level opponent.

Women’s fights, however, are developing a track record as big television ratings movers. If you were going to make Nunes’ next title fight a UFC on FOX fight, whomever her opponent could end up being, all you’d have to do is put together a commercial showing Nunes finishing Rousey and Tate and the ratings should draw themselves. Hell, maybe WME could even make Nunes the star of a promotional feature or two this time in the buildup. Crazy thought, I know.

@RuckerYeah: Now that its all said and done what do you think of Ronda not talking to media? Will it happen again?

Well, UFC 207 is reportedly going to break the million-buy mark, so for this particular event, it worked. It’s not like million-buy PPVs grow on trees. But just to play devil’s advocate, how much higher could the buyrate have gone if she had done a full-on media blitz and gotten herself portrayed as a sympathetic figure making a gallant comeback? She potentially could have vaulted into the UFC 100/200 buyrate stratosphere, but we’ll never know.

Either way, this was undeniably a unique set of circumstances. Rousey not talking to the media helped add to the mystique of the fight. Once. But then she went out and suffered a second straight devastating loss, one which will likely put a big dent in her drawing power. And in hindsight, Rousey’s petulance in the lead-up to the fight only fed into a narrative of how her small, insular circle of hanger-ons went way off the rails.

There’s only one other star on the roster who has enough sway to even think of pulling a move like Rousey did with the media. On one hand, it’s easy to conceive of Conor McGregor, in his constant gamesmanship with the UFC, trying to play the same card just to see if he can. But at the end of the day, McGregor just seems to revel in being in the spotlight, enjoys being the center of attention, enjoys saying controversial things to stir people up, and understands this is what has made him as big as he is.

Beyond that, who else has the pull to get away with what Rousey did? There are exactly two A-list PPV draws in the UFC right now. Beyond them are a bunch of guys and gals hungry to get to that level, who aren’t wealthy and need every last pay-per-view buy to help get there. And if Dana White still has the sway he held under the Fertittas, he’s going to put the smack down on the next fighter who tries to make a similar demand. We’ll see.

@VeteranCrafty: What do you think is the next move for the @ufc in the lightweight division?

Hopefully they get Khabib Nurmagomedov vs. Tony Ferguson done for one of the big upcoming shows. This is one of the best fights you can make at any division in 2017. It’s a fight so good it doesn’t need a belt, so let’s hope the UFC doesn’t go through with the rumored plan to come up with a cheap and meaningless interim belt — or an interim bullsh*t belt, as Khabib recently called it — and simply presents it as a No. 1 contender’s fight. By the time that’s settled, in theory, the winner would be good to go in time for a fight with McGregor. Assuming McGregor doesn’t decided to fight Nate Diaz, or go up to heavyweight, or down to flyweight, or whatever else happens to catch his fancy. But yeah, sign me up for Khabib vs. Ferguson.

Where you at, champs?

@auggie85: Where are all the UFC champions?? Only 1 title fights booked in the coming months and it’s for a vacant/new title

Well, out of the 10 current titleholders, three (Nunes, Johnson, Garbrandt) have fought in the past 30 days and three more (Joanna Jedrzejczyk, McGregor, Tyron Woodley) have done so in the past 60 days, so it’s not fair to expect them to be booked right now. Two more (Michael Bisping, Daniel Cormier) are rehabbing injuries and not quite ready. Stipe Miocic had a fight for what was expected to be his next contender (Cain Velasquez vs. Fabricio Werdum) drop out, and Jose Aldo fights approximately once every 345.2 years even under the best of circumstances.

If I’m looking for silver linings, in theory, this means the spring lineup into early summer should be loaded. And if I’m Georges St-Pierre or Nick Diaz, I might be interested in reestablishing negotiations with the UFC right about now. In the meantime, UFC seems to have fallen into feast-or-famine cycles, so we’re going to have to ride this one out.

@logankader: Do you expect one more big fight added to 208 or is the UFC content with leaving it as is?

Looks like the crowning of the first UFC women’s featherweight champion is basically the only selling point for the UFC’s Brooklyn debut. After Holly Holm in the main event, there’s a pretty steep drop-off in name recognition. Okay, and Jacare Souza vs. Tim Boetsch, which was announced Friday, too, since it will provide for a rare Jacare sighting. But anyway, there are 13 fights booked. And if they’re still having trouble filling UFC 209 and UFC 210, so if they do come up with a headline-worthy fight, it’s likely to go to one of those shows and not be used to bolster 208. Needless to say, UFC 208 will be no UFC 205.

@JHKamper: What does Johny Hendricks’ future hold? How do you think he fares at middleweight?

I’ve been calling for Hendricks to go up to middleweight for years. Any time I did, someone would inevitably go into the comments and lecture me for daring to tell him to do so, even though you could see he was plainly heading down the path that has led to exactly where he is now.

At UFC 207, Hendricks looked listless against Neil Magny after a third weight-cut fiasco in his past four scheduled fights. It seems plain his body simply isn’t having it anymore, after years and years of extreme weight cutting going back to his wrestling days.

Hendricks isn’t a bad guy, despite his knack from bringing flack onto himself. I’m not taking any joy in his plight. It’s not hard to understand why Hendricks has resisted going up to 185: He won’t exactly be a huge middleweight. And yet he’s been given plenty of chances to stay at 170, and it’s not fair to potential opponents anymore to sign on for an opponent who misses weight over and over. It’s hard to see how things get better for him.

Fight of the Year.

Robbie Lawler vs. Carlos Condit, as was the pick of MMAFighting.com’s staff. I was cageside that night in Las Vegas, and I knew right then and there, on Jan. 2, that Fight of the Year was settled. It was an awesome year for FOTY candidates, including the dramatic twists and turns of the McGregor-Diaz matchups and the three-round barnburners that were Marco Polo Reyes vs. Dong Hyun Kim (for which I was also cageside) and Cub Swanson vs. Doo Ho Choi. But I’ve never in a decade cageside seen anything like the ferocity of the fifth round of Lawler-Condit, in which they went all out with the fight hanging in the balance and the title on the line. Those final five minutes sealed the deal for me.

@afonsolameiro99: Best p4p in your opinion

Mighty Mouse. In an era in which titles are passed around faster than the common cold, and in which other potential contenders for the throne remove themselves from the equation by failing drug tests, Demetrious Johnson is MMA’s Energizer Bunny who just keeps going and going. One more successful flyweight title defense ties him with Anderson Silva for best in UFC history and if he’s still champ when we flip the calendar to 2018, he’ll surpass Jose Aldo for third-longest reigning champ of all-time. Johnson’s consistency in this age in which Stipe Miocic, who won the heavyweight belt in May, is already the fourth-longest-reigning current champ, speaks for itself.