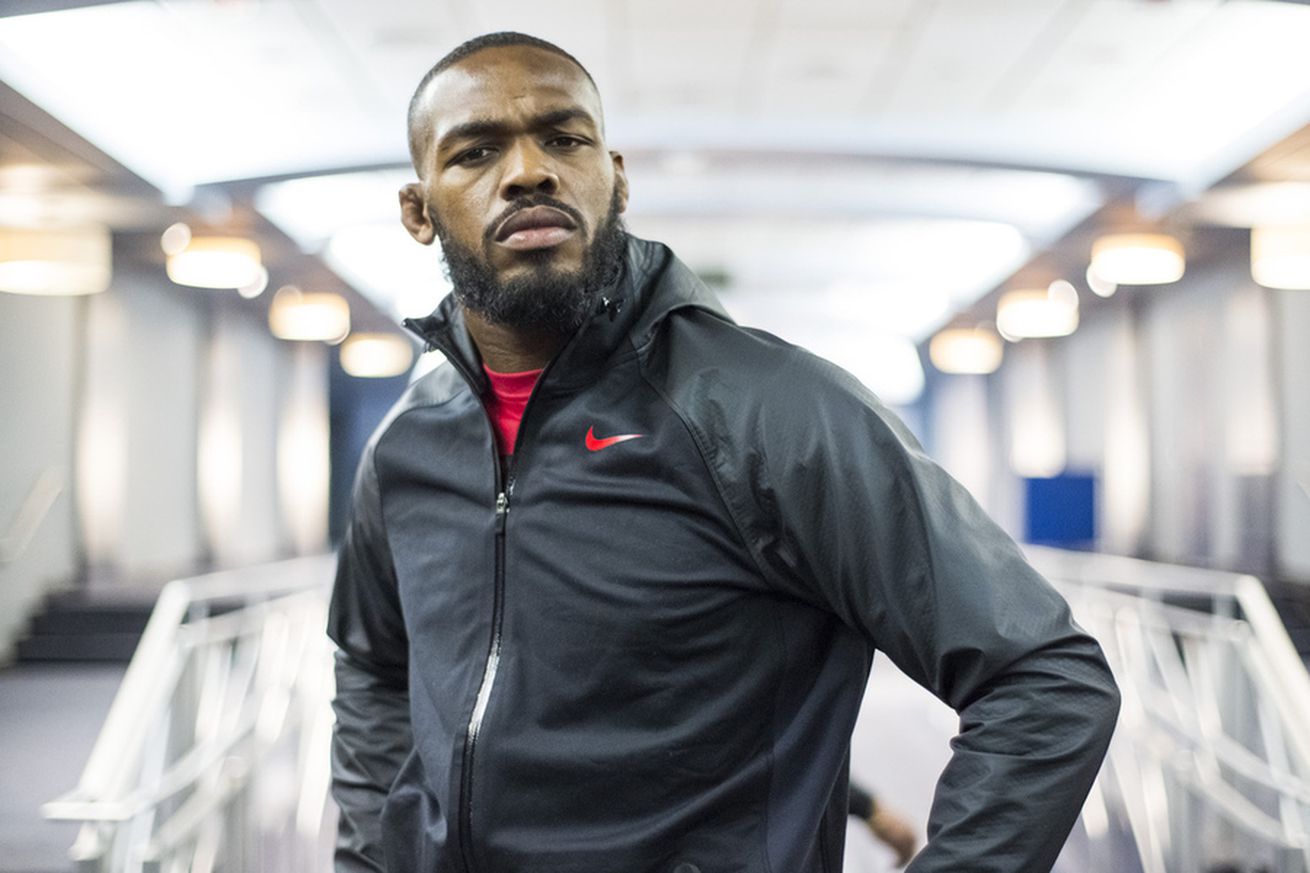 Say this for Jon Jones: He gives us plenty to discuss. So one week after a UFC 215 event which came and went with a whimper, let’s get back into the latest developments in the former UFC light heavyweight champion’s case, where things go from here, and more:

@dpop2: So do we all agree Jones is not GOAT and most likely been cheating his whole career… That makes me sad just asking

Okay, so, first things first: While Jones keeps getting into trouble, we can’t make the leap to assuming he’s cheated for his entire career. And we also have let his current USADA case play out before passing judgement.

Feels like we’ve made those disclaimers before, doesn’t it?

I understand why a fan like you, and you’re certainly not alone in your thoughts, would come to the conclusion Jones’ entire legacy has been tainted. After all, this is someone who has gone from DUI and wrecking a Bentley to a one-day drug rehab to a hit-and-run-incident involving a pregnant woman and now a second potential USADA violation in just over a year. It’s doesn’t take a quantum leap in logic to wonder if that’s just the stuff we’ve heard about.

It’s entirely possible Jones unknowingly took a tainted supplement, but he exhausted the ignorance excuse in getting a lenient USADA punishment last time around. This is turning into a modern-day version of the boy who cried wolf.

As of July 29, after the head-kick finish of Daniel Cormier at UFC 214, the only question remaining as to whether Jones was the greatest fighter of all-time was whether he’d already surpassed Anderson Silva. Most believe he had, and if not, he was getting very close.

But that was before he popped, and where things stand now, even if you can’t prove Jones was cheating his entire career, he’s indisputably the biggest case of wasted talent in the history of the sport. There’s simply no way to sugarcoat a record in which he’s never been legitimately defeated in the cage, but has also been stripped of UFC championships three times in two-and-a-half years.

We’ll finish here with the notation Jones is still young enough to do something about it, even if he is suspended four years. But then, that’s a disclaimer we’ve made one time too many, as well.

A couple months back, we passed the two-year anniversary of the UFC’s USADA era, so this seems as good a time as any assess where we are with the effects of the undeniably thorough drug-testing program on the sport.

Undoubtedly, the program has done its share of good. The goal is to create a level playing field. When a baseball player uses performance-enhancing drugs, they’re hitting a ball farther, running faster, etc. A PED-enhanced fighter is inflicting physical damage on another human being. So we’re not going to act like USADA isn’t acting with good intentions. A fighter who doesn’t want to cheat just to keep up doesn’t have to anymore.

Still, there seems to be a line of thinking in the MMA space that goes something like: You either accept USADA is infallible, or you hate their fighters and don’t care about their well-being. Isn’t there room for some gray area? I don’t claim to be an expert on the ins and outs of testing, so I won’t pretend to be, but I think there are a few questions that need to be asked:

That’s a starting point. To answer your question, USADA’s done more good than harm, but smoothing out the program’s rough edges and adjusting it to the fact combat sports is that square peg in the round hole would go a long way toward improving it.

@kopxpert: Who do u think will defend their title first, Holloway or Miocic? I mean, considering their contract issues and all. Thanks.

You’re welcome. This week, UFC featherweight champion Max Holloway indicated his contract ran out and he’s not fighting again until he gets a new one. Heavyweight champ Stipe Miocic, meanwhile, indicated a couple months back that he wants a better contract, after getting paid less money than his challengers in recent fights.

This ties into an emerging storyline: Top-end fighters simply don’t fear WME-IMG the way they did the old Zuffa regime. Back in the day, Dana White had most of the fans on his side, and if he trashed a fighter, most of the people would side with him. Today? When Demetrious Johnson spoke up this summer, fan reaction was split, and Johnson came out of the kerfluffle with a better deal.

Lorenzo Fertitta, meanwhile, was the good cop to White’s bad cop, and he sweet-talked more than one fighter into doing something perhaps against their best interests for the sake of the company. That’s gone now. Fertitta is completely out of the UFC game and is off seeing if he can turn his billions into trillions.

Fighters can also look at the lay of the land and see WME is in desperate need of new stars. UFC 217, with Michael Bisping vs. Georges St-Pierre topping a triple-title-fight bill, is the only event for the remainder of the year which is going to draw a big buy rate.

So if you’re a fighter like Holloway and Miocic — guys who are all-action fighters whose bouts usually tend to end in a memorable fashion — you’ve got an extra bit of incentive to play hard to get.

Especially when one considers how some champions have decided to wear going the safe route like a badge of honor in recent months. They’ve been applauded for it, and there’s a certain logic that goes with it: Why risk what you’ve earned, when you’re making championship money now, and go back to making chump change?

Cool, but for a moment, let’s imagine if Conor McGregor had that mindset. Imagine he won the featherweight title and then turned into a dull competitor. He wouldn’t be banking nine figures right now, that’s for sure.

That’s why someone like Tyron Woodley, will guarding the income level he’s earned, will also never make McGregor money. And that, in turn, is why Holloway and Miocic are smart to hold out for now. The UFC badly needs guys and gals capable of putting on exciting main events. Holloway and Miocic are pretty high on that list. I don’t know who’ll come back first, but nor do I blame either for going that route.

@MalmstromJason: Assuming @dc_mma gets his title back (rightfully so), who should he defend it against upon his return? #andstill

Cormier was reinstated as UFC light heavyweight champion since you sent this tweet, and yes, that’s the correct call. The result of UFC 214 was changed from a Jones TKO win to a no-contest, and champions don’t lose their titles via no-contest.

That’s how it all plays out on paper. Then there’s real life, and, although Cormier is the rightful champion, you simply can’t brush aside the image of DC getting head kicked by Jones for what had been Jones’ second win in their two fights.

That’s going to be a tough nut for Cormier to crack. The next time DC steps into the cage, his army of haters, the ones who would find something to criticize if Cormier rescued toddlers and puppies from a burning building, will be out in full force.

And it’s not like there’s a big line of fresh fights at 205 pounds. There’s Alexander Gustafsson, a fight we’ve already seen. There’s Volkan Oezdemir, who is undeniably legit but seems one fight off. Jimi Manuwa lost when he seemed right on the cusp, and Phil Davis and Ryan Bader both being allowed to go to Bellator doesn’t exactly seem like a brilliant idea in hindsight.

So, I’ll throw a bit of a curveball here: What if Cormier, while holding on to the 205 belt, goes up and challenges Miocic in his next bout? Such a match would take the focus off the light heavyweight circumstances for awhile. A champion vs. champion superfight would be a money fight for Miocic, who hasn’t quite broken through as a top draw in spite of his accomplishments, and hopefully be a payday that ends his contract impasse.

Meanwhile, have Gustafsson and Oezdemir square off to be next in line, however the chips fall.

A bit far-fetched? Maybe. If you’ve got better ideas, lemme hear them.

@The3rdCory: Is there a light at the end of the tunnel?

Yes, but with each passing week it seems more and more like an oncoming train, doesn’t it?