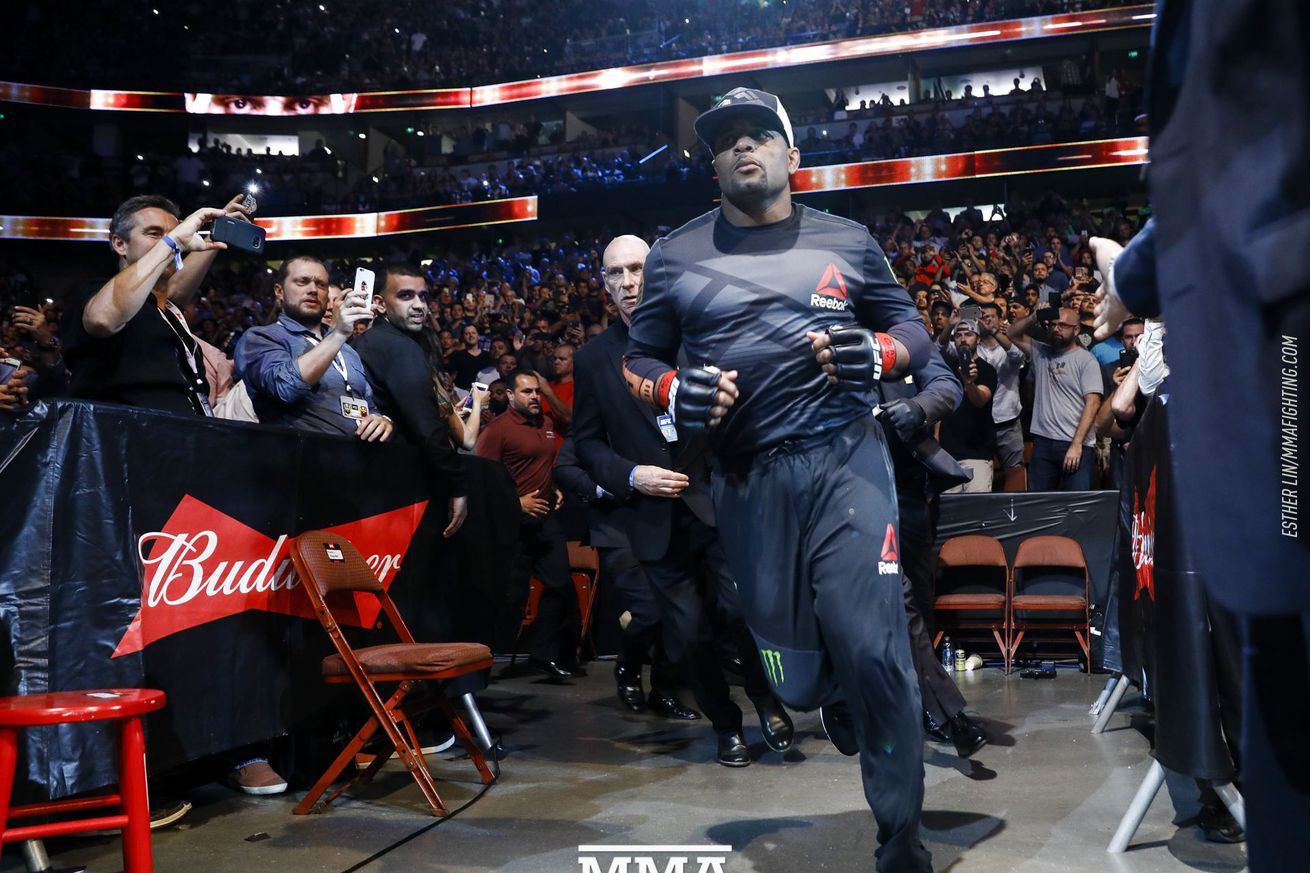 The UFC’s back for the final event of a nearly three-month long stretch, UFC Fight Night 114 in Mexico City, before going into sabbatical for a month in order to make room for Floyd Mayweather vs. Conor McGregor.

But as of now, most of you are looking back, to last weekend’s UFC 214, in what that eventful evening means going forward. So let’s get right into another edition of Fightweets.

What’s next for Daniel Cormier?

@tonydenton78: Does DC continue at LHW, move up to HW or call it a day and move into the commentary box?

One of the layers upon layers of issues which made the UFC 214 rematch between Daniel Cormier and Jon Jones so intriguing was simply how much the result of the fight meant to each competitor’s legacy.

If Jones had lost, he would have been wide open to criticism that his best days were, in fact, behind him. One perfectly placed head kick made sure that wasn’t the case.

As for DC? With a win in Anaheim, we would have been talking about a fighter with the case for greatest mixed martial artist of all-time. Cormier went on one hell of a run at heavyweight, went down to 205 to avoid clashing with a teammate and then-champion Cain Velasquez, and then went on another run and conquered everyone in his path except Jones.

You could look at Cormier’s legacy as being the light heavyweight answer to Antonio Rodrigo Nogueira during Fedor Emelianenko’s peak. Or you could consider him the MMA equivalent of the mid-1990s Houston Rockets. They weren’t better than Michael Jordan’s Chicago Bulls, but the Rockets were indisputably the best of the NBA for a two-year stretch, and were good enough that they likely would have also been champs in other eras.

That’s where Cormier stands today. After matches with Alexander Gustafsson and the second Anthony Johnson fight, DC made it clear that the weight cuts were starting to get to him as he gets on in years. Maybe a move back up to heavyweight is the right one at this point? After all, he’s certainly not getting another light heavyweight title shot any time soon. And there’s also no guarantee at this point that he and Velasquez would ever have to fight.

Or maybe Cormier does decide it’s time to retire and go full-time on commentary, in which case, maybe he didn’t beat Jones, but he’d retire with a legacy 99 percent of the fighters in this sport would give anything to have. That’s not a bad place to be.

@MP2310: What’s the best move for Tyron Woodley both inside & outside the Octagon?

I feel like I’ve mostly spoken my piece on Woodley in the wake of his UFC 214 welterweight title defense against Demian Maia (I’ve spoken about it here and here), but to sum up: Yes, Woodley’s game plan against Maia was flawlessly executed; yes, even more so now that we know the extent of Woodley’s shoulder injury; no, fans are under no obligation to love it.

And that’s where Woodley’s pissed-off routine is starting to wear a little thin. There will never be a lack of camera time for those with axes to grind against the UFC, as such material is proven to draw attention. But it’s hard to take seriously the idea Woodley hasn’t been promoted after he complained for about the millionth time.

Woodley been slotted in the co-feature position on two of the three biggest shows over the past nine months: UFC 205 and 214. His first fight with Stephen Thompson and the Maia fight were chances to be featured in front of huge audiences of casual fans and opportunities to make them interested in his future fights. He also had a chance to headline UFC 209 in between with his rematch against Thompson. There are plenty of fighters who can legitimately say the UFC hasn’t done their best to promote them in the WME era — coughcough Demetrious Johnson coughcough — but Woodley isn’t one of them.

A generation ago, the New Jersey Devils bored casual hockey fans to tears with a defense-first style which won Stanley Cups but ultimately drove down attendance and TV ratings until the NHL changed the rules of the game to encourage more offense. When the cage door locks, the UFC’s job in promotion is over. Woodley is well within his rights to fight a safe style that keeps the belt around his waist. But no amount of griping about what the UFC is or isn’t doing will change the fact the fans aren’t buying what he’s selling. And just like hockey fans were under no obligation to buy tickets to see their team play the Devils, fans are just as well within their rights to take a hard pass next time Woodley’s on the card.

@TomTregay: Does Lawler deserve a title shot? Or who should Woodley face next if it shouldn’t be him

If Woodley isn’t going to fight Georges St-Pierre — which was something he predicted just seconds after White said at the UFC 214 pre-fight press conference that GSP would fight the Woodley-Maia winner — then there really isn’t much other choice, is there? Fortunately, it would be a sound choice. If Woodley wants a proper push, and a fight which would interest the fans, a rematch against a fan favorite with an exciting style is going to be his best bet.

@TrevorHash: What if Georges wins against Bisping? Do you think he has a chance against the killers at 185?

That’s really hard to imagine, right? In his prime, St-Pierre hesitated on the idea of that long-teased superfight with Anderson Silva. He repeatedly spelled out that if he was going to go ahead with such a bout, he would take time off, build up muscle, and probably not going back to welterweight afterwards. That was years ago. Now, he’s 36, hasn’t fought in three years, and there’s a whole pack of killers from Robert Whittaker to Luke Rockhold to Yoel Romero.

GSP’s fight with Bisping reeks of perceived opportunism on both sides. St-Pierre sees his opportunity to pull a 10-years-on version of Randy Couture-Tim Sylvia, where the former champ sits on the sidelines and thinks “I can beat that guy” and then goes and does something about it. Bisping believes this is his biggest money fight. And as much as we’re all kind of over the concept of this fight, I mean, a lot of people were saying the were sick of hearing about Jones and DC a few months ago, too. By the time Nov. 4 rolls around, both GSP and Bisping will probably be proven right, even if it doesn’t seem that way right now.

@ArpanLobo: How many seconds does it take Volkan Oezdemir to knock out Bones

Wow, that’s bold. I don’t think anyone’s expecting Oezdemir to finish Jones, but the mere fact we finally seem to have ourselves a real, live, legitimate new contender at 205 pounds is something, isn’t it? I might be going against the grain on this one, but I think I’d rather see Oezdemir challenge Jones for the championship next instead of seeing the shot go to Gustafsson.

Don’t get me wrong, at the end of the day, you wouldn’t have to twist my arm too hard to get me to agree on watching a runback of the UFC 165 Jones-Gusty classic. But Oezdemir is the shiny new toy. He has quite a head of steam after defeating Ovince Saint Preux and then scoring first-round knockouts of Misha Cirkunov and Jimi Manuwa, all in the span of six months. Gustafsson, on the other hand, already had two cracks at the belt.

Of course, if Jones puts everything on hold awhile to chase Brock Lesnar, Gustafsson and Oezdemir could square off and settle matters. Either way, we’ve got fresh, interesting potential matchups at the top of the light heavyweight division, and that’s really more than we thought we could ask for.

@hugoadc: Do you reckon we’re likely to see @josealdojunior in the UFC in NY later this year?

The former UFC and WEC featherweight champion says he wants to fight Cub Swanson in November, and I reckon that would be one hell of an idea.

Aldo and Swanson famously met at WEC 41 in Sacramento in 2009, and they barely got past the intros before it was over. Aldo came running out of the gate and knocked Swanson out with a running knee at just eight seconds.

If you weren’t around back then, trust when I say this was one of those “holy s*it” moments when you realize once and for all that you’re indisputably looking at The Next One. The win announced Aldo as legit, and he went out next and finished Mike Brown to win the WEC belt and start a six-year reign is lineal champ.

That result was always used against Swanson whenever he got close to a shot at Aldo’s belt. He never quite became the clear-cut No. 1 contender, but when there were a few guys with claims, “eight seconds” was the “13 seconds” of its time.

Now? This is the fight to make for all the right reasons. Holloway vs. Edgar is the obvious next fight. Whoever won an Aldo-Swanson rematch would have the clear-cut next best claim. Sounds like a no-brainer of a matchup to me.