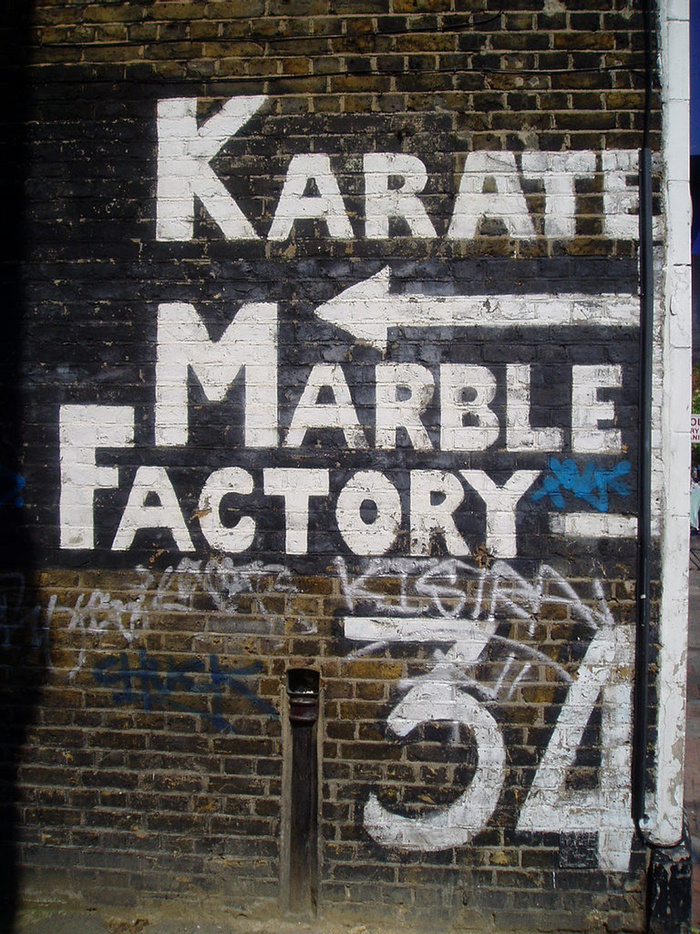 “Satori” in the Japanese Zen Buddhist tradition is the word for sudden enlightenment. My first brush with “satori,” if you can call it that, occurred at the Marble Factory Dojo in 1980, a Goju Ryu karate school run by the kick in the eye figure of Sensei George Andrews. In business from 1974 to 1998, at one time the Marble Factory in Camberwell boasted 1000 students on the books, and was one of the most respected clubs in the UK for learning the hard and soft art of Okinawan karate-do.

I discovered the dojo on 34 Camberwell Road in 1980. Newly arrived in South London from Liverpool, I’d seen the words “Marble Factory Karate” daubed in white paint on the brick wall of an alleyway on countless bus journeys to-and-from the shopping center at Elephant and Castle. Did the white arrow on the wall lead to a “Marble Factory” next to a karate school proper, or was it just some old graffiti that hadn’t yet been removed by the local council? You had to walk ten meters down a dark and daunting alleyway in order to find out.

So one day, aged 10 and snot nosed in short trousers, curiosity got the better of me. As I passed the fish and chip shop on the corner, and followed the white arrow down the alleyway, I suddenly experienced an intense and blinding moment of clarity. Like most 10-year-old kids from Liverpool, I wasn’t much prone to sudden and inexplicable feelings of spiritual transcendence. I couldn’t explain it, much less comprehend. This was odd but significant. For right there and then, I had somehow seen into my own true nature. And, in a fleeting moment of inner revelation, the present and the future seemed to collide and culminate into one at the battered red door of the Marble Factory.

Moreover, the 10-year-old detective had solved a local mystery. The Marble Factory and the karate joint were one and the same. The school was in an old printing works—an inky, gloomy Victorian era building above a noisy mechanic’s yard. The lopsided red door creaked open. Under the queasy yellow glare of a 40- watt light bulb, I climbed the steep and precarious stairwell up to the training area, the dojo. This wasn’t a sports hall. This wasn’t a fancy pants high-end gym. It was a sparse, raw space of iron pillars, cold plaster walls, recessed lead-lined windows and wooden floors bulled up to a parade shine. Welcome to the Marble Factory. A straight-up, traditional, Okinawan style dojo with no frills or finery attached.

This was a school of character and characters. There was no Mr. Miyagi like figure tending bonsai trees to greet the untested beginner. Enter the Guvnor: Sensei George Andrews, a gruff, South London geezer with piercing seen-it-all eyes and hands like blocks of polished stone. Educated at Fitzroy Lodge Boxing Club on the Lambeth Road, Andrews, an avid karateka since 1967, and a senior dan grade, had been running the Marble Factory in Camberwell since May 1974. This place was his own space, his own shrine to the fighting art of Okinawa, lovingly refurbished, and maintained, to teach long standing devotees and new disciples. 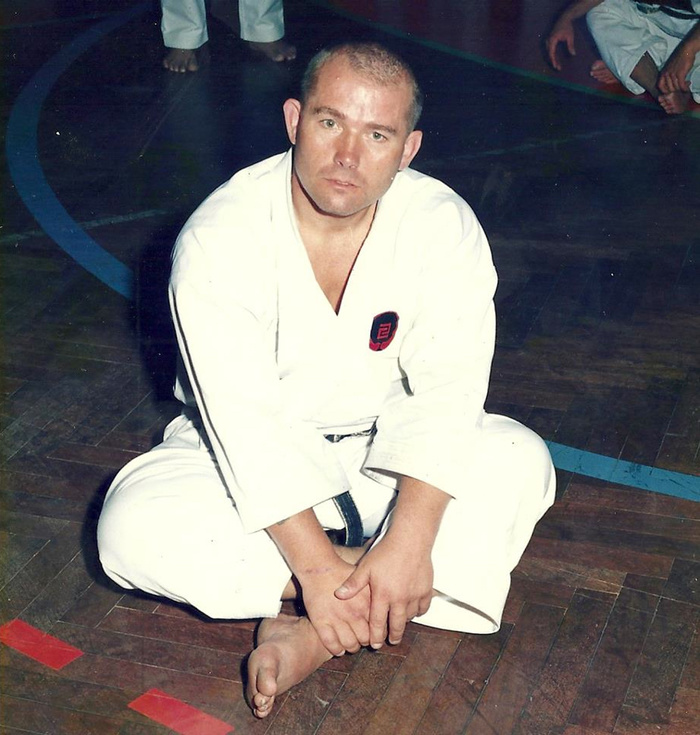 Like many U.K. karateka in the 1960s and 70s, Andrews had come to the art of the empty hand through a fusion system of various karate styles. In 1973, as a dan grade on the up, he was introduced to the Goju Ryu style, one of the purest forms of karate-do. Andrews was immediately hooked and, under the tutelage of Sensei James Rousseau, he made the transition to Goju Ryu.

Why call it the Marble Factory? Andrews named it after a satori or two in the early 1970s. The first epiphany occurred after an introduction to a Japanese karate master called Teruo Chinen, a 6th dan in Goju Ryu. “When I met him,” said Andrews, “I noticed his knuckles were calloused. But, when I shook his hand, I felt a warm and friendly person.”

Everything clicked into place for Andrews when, in 1977, he was introduced to “the deity” of Okinawan Goju-Ryu Karate, Sensei Morio Higaonna. It was to prove an unforgettable meeting. Sensei Higaonna, a humble master of Okinawan vintage with a gentle handshake, had fists that were hard and buffed like “something made of marble.” And Andrews was so taken by the deadly appendages of Sensei Higaonna that he named his school after them.

But what was it like to be an anonymous white belt at the Marble Factory in 1980? For the first time beginner or the dedicated senior, this joint was a hardcore dojo. On duty, Sensei George, the boss of the shop floor, in the immaculately pressed white gi and faded black belt, was a taskmaster who didn’t miss a beat. You couldn’t cheat on things like knuckle press ups. His eye was omniscient and his roaring Sarf Lahndahn (South London) voice was more like a dog’s bark than anything human. He was a ball buster who’d address you by surname (“Reynolds!”) like you were in the army or the slammer. Sometimes those cold and drafty Saturday afternoons learning kata in the Marble Factory often felt like the bilge end of “satori”. But I was getting confident. And confidence is a child’s first weapon. 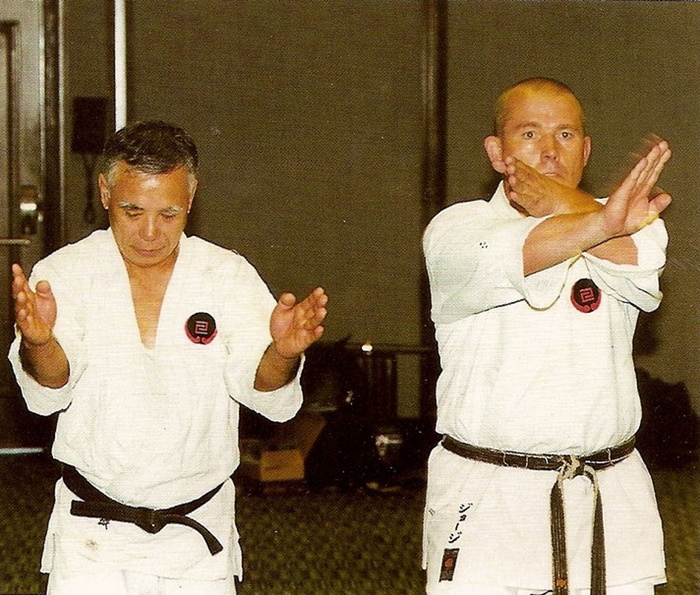 Press ups. Sit-ups. And star jumps. There were hundreds upon thousands of them at the Marble Factory. Grueling physical training and rivers of sweat aside, instruction in the unarmed art was no-nonsense and taught with strict adherence to form, precision and power. And Sensei George was an unforgettable teacher. One who taught every technique in clear and simple language. “When you are doing a front kick, imagine you are kicking over a wall or a fence; when you cock your leg for a side kick, imagine that you are a dog taking a pee on a lamppost,” and so on. It was easy to remember. And hard to forget.

Satori at the Marble Factory or not, the path to greater enlightenment is often strewn with obstacles. Like sartorial ones. To study karate you needed to buy a gi. The Marble Factory didn’t sell them. Fortunately, there was an outlet called Rhino Sports on Camberwell Green that did. My Old Man, the two-fisted American writer in England, who had written about boxing for the Guardian newspaper, was not sold on karate. Much less so on buying a uniform for No.2 son.

“What in Sam Hill is a gi, for crying out loud? Oh, one of those pajama suits. I don’t like that pajama suit crap. All that kicking is dirty. Dirty gook fighting. I don’t like that shit. What about boxing? Real men lace up the gloves and go duke it out in the ring. They don’t wear pajama suits and make a lot of stupid noises,” and so on and so forth. 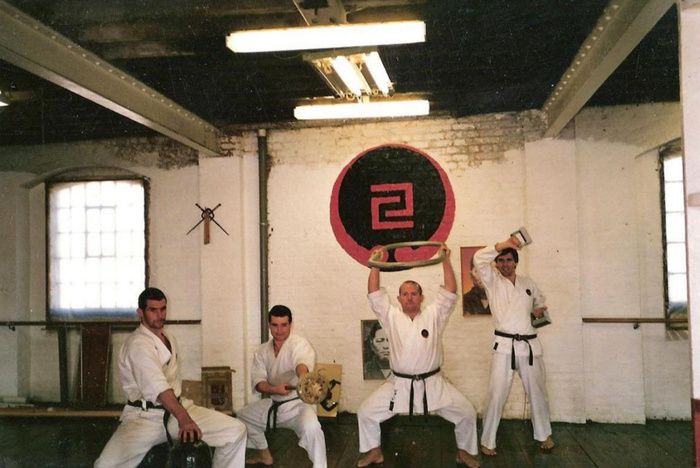 I needed a gi but had been going to class every Saturday in a T-shirt tucked into a pair of white Marks and Sparks underpants with skid-marks. This prompted Sensei George, week after week, month and after month, to bark at the pathetic urchin from Liverpool. “Reynolds! Where’s your blooming gi! This is karaaate! You need to getcha mum and dad to go and buy you a gi, my old son. Don’t come back without one. I’m sick of seeing you do karaaate in your blooming knickers! Sort it out!”

Using his own initiative, the Old Man went down to Rhino Sports on Camberwell Green and bought a gi. Unfortunately, I wasn’t with him at the time and he bought a black gi instead of a white one. “Jesus H. Christ, God damn it! The limey asshole in the store sold me the wrong fuckin’ pajama suit. I hate this cockamamie country. And that gook pajama suit shit. That’s strike one!”

The Old Man was a baseball fan. And in our house it was three strikes and you’re out. It didn’t much help that the art of karate-do was Japanese via Okinawa. The Old Man was never much keen on Japan. He was one of those Americans who knew exactly where he was the day the Japanese bombed Pearl Harbor. 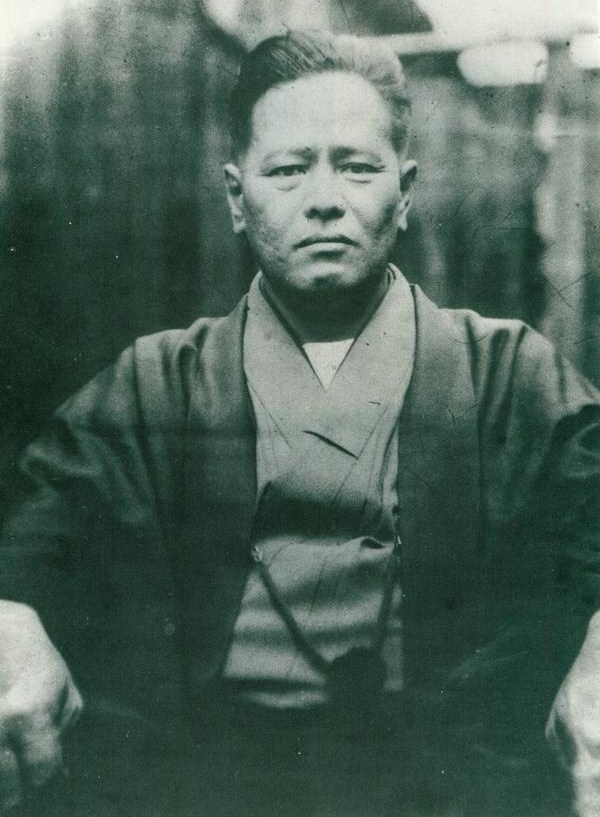 Strike two came not long after. In the moody timbered hall of the dojo, there was an old black and white picture of Miyagi Chojun, the founder of the Goju Ryu style, with some words around the image in Japanese script. One drizzly afternoon, the Old Man picked me up after class and noticed the seniors bowing in seiza at the aged snap. “Do you have to bow to that picture of the old Jap? Who is he, a pal of Tojo and Emperor Hirohito? I don’t approve of my boy bowing down to some picture of a Jap in a dress. That’s strike number two.”

Strike three happened at Dog Kennel Hill School. The universe of childhood is violent and I got into trouble for misusing karate in a playground fight. Desmond Bradley, some kid from my year, was shaking down little brother one day in the schoolyard. Unable, aged 11, to resolve the dispute with the logic or reason of an adult, I gave Desmond a gyakazuki (reverse punch) in the throat and dispatched him to the infirmary. Desmond’s parents gave the teachers an earful. And the incident became the basis for a salutary tale at school assembly from Mr. Knight, the deputy Headmaster. After buying the wrong colored gi, bowing down to the “Jap picture,” this was the last straw for the Old Man and I was banned from karate thereafter. I didn’t even make it to a 1stkyu grading in my skid-marked underpants. What a bummer.

Nonetheless, life went on at the Marble Factory Dojo until the building got destroyed by a fire in 1998 (it started in the garage down below). All that’s left of the Marble Factory are the hand painted words on the back alley wall. When erecting the new luxury apartments that stand on the site of the dojo, builders found hundreds of unpolished marbles in the rubble. 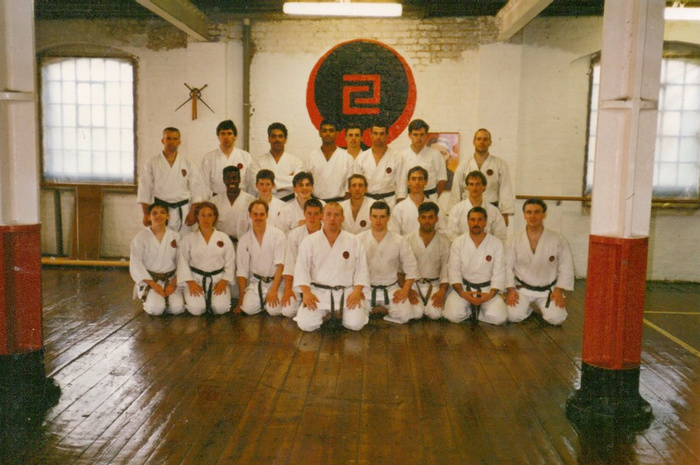 Down but not out, students rallied behind Andrews after the fire and a new space was found nearby. Life goes on at the London dojo. Andrews is in much demand for seminars all over world and celebrates his 50th year as a karateka in 2017. Now an 8th dan, he’s still recognized on the street in South London by old students. Some he remembers, some that he doesn’t. I’m one of the latter.

What, aged 10 and small change, was my satori at the Marble Factory? It was a sudden moment of insight that proved, to me at least, that no matter what fighting art you do, no matter how long, or how short, you can always learn something new about yourself and you can always change your thoughts. The important thing to remember is that it doesn’t really matter what way you follow, or what art or style that you do, the journey to satori, if you can call it that, always begins with a few steps down a dark alley. Always.

The Gym Above The Restaurant: Master Woody, the Other Thai in Manchester

When Manchester Was Mecca for Muay Thai

Mind the Glap: One Man’s Love Affair with the Thai Spinning Elbow