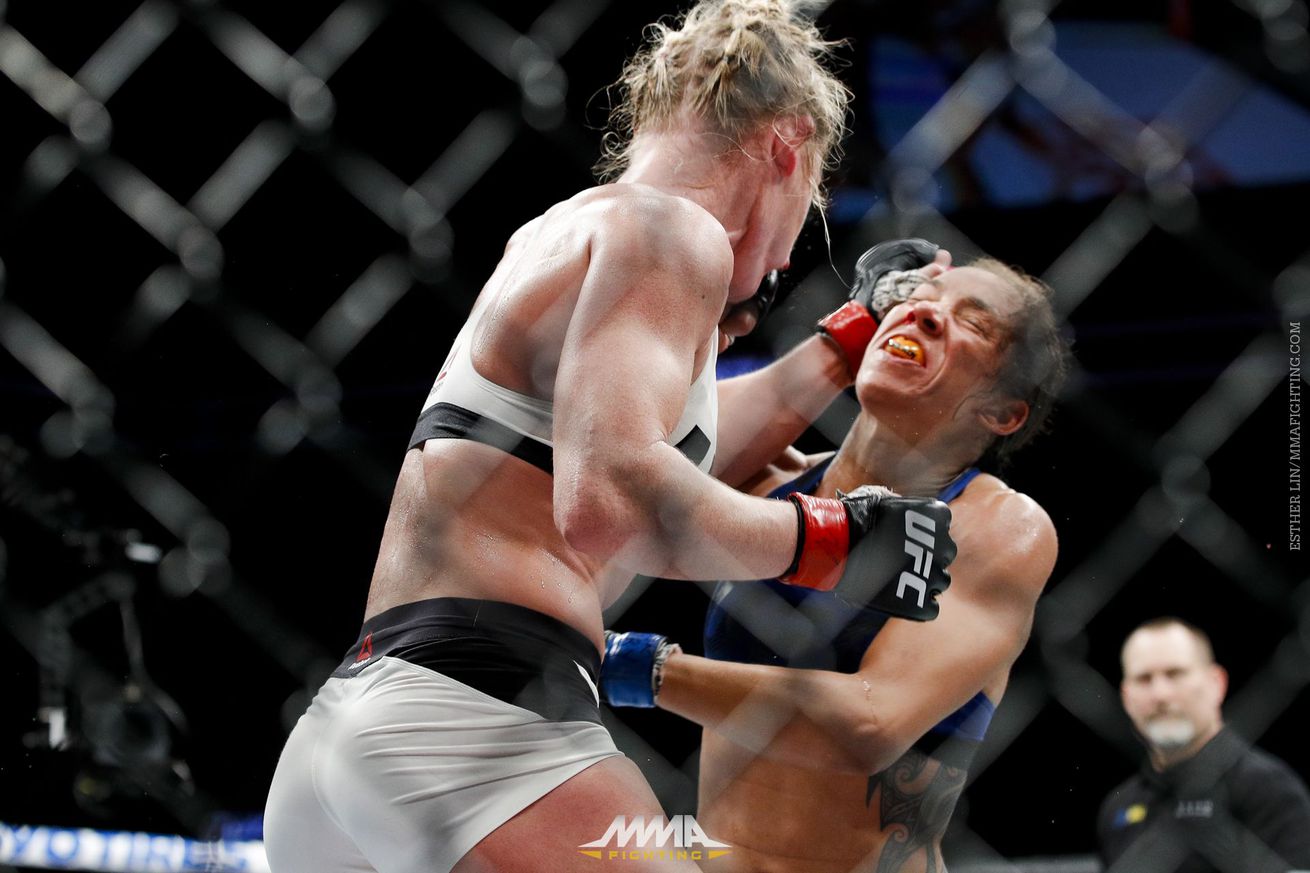 It’s never a good sign when a show is over and the main topic of conversation is the judging and officiating.

Saturday night’s UFC 208 pay-per-view ended up being a night where even Dana White conceded it wasn’t much of an event beyond Dustin Poirier’s strong fight with Jim Miller. How bad was it? For the first time in recent memory, the UFC only gave out three performance bonuses — to Miller, Poirier, and Ronaldo “Jacare” Souza, the only fighter who finished a fight.

Long before the show took place, problems ensued. Without an existing champion ready to fight on Feb. 11, the UFC decided to create a women’s featherweight title, largely for Cris Cyborg. But due to health problems from her last weight cut, she wasn’t able to be ready. And even if she was, there was a drug test issue that would have kept her off the show had she been announced to headline.

So the UFC put Holly Holm, having lost two straight at a lighter weight class, against Germaine de Randamie, who was not even considered a title contender at bantamweight. The title had no credibility, but it did serve purposes. The first and main one is that UFC had a pay-per-view show and needed a championship fight, although in doing so, it watered down the term “championship fight” greatly. The second is, if Holm won, a Holm vs. Cyborg fight would probably have more interest than any women’s fight the company could put on in the post-Rousey era.

But the whole thing was silly. For those who care about history and records, only a few fighters have won titles in two different weight classes in the UFC, legends like Randy Couture, B.J. Penn and Conor McGregor. Anderson Silva, Jon Jones, and Georges St-Pierre never did it, and didn’t even try to do it. While the milestone didn’t happen, having Holm join in that designation would have watered down the accomplishment greatly. And if there is a rematch, the first fight showed that Holm and de Randamie are close enough that whoever has the better day will be likely to win.

Despite being ranked higher at bantamweight, Holm was far from a lock to win. Her losing wouldn’t even be called an upset. And given the parameters of what the judges had to work with, Holm’s loss was not a robbery, even though by all rights it should not have happened.

It was a close fight, and when it was over, the outcome was in doubt. Judges Sal D’Amato, Chris Lee, and Jeff Mullen all went 48-47 in favor of de Randamie. The rounds were competitive. From a stat standpoint, de Randamie out-landed Holm 80-77 and stopped all nine of Holm’s takedown attempts. Media scores on MMADecisions.com favored Holm by a 59-41 percent margin, close enough to where you have to concede it could have gone either way, but also a figure that showed Holm was unlucky.

Of course, that doesn’t take into account the officiating of Todd Anderson, who failed to take away a point for a punch after the horn in the second round by de Randamie — a punch which may have been the most devastating blow of the fight. Then when de Randamie punched Holm after the horn sounded in the third round, Anderson warned her, but again didn’t take a point away. Of course, if he had at least the second time, the fight would have ended up a draw, meaning a rematch would be necessary since there was no champion going in. You can debate the judges’ scores, but it’s hard to debate that de Randamie shouldn’t have been docked at least one point, which would have changed the outcome.

But it was not an entertaining fight, and hardly something people would clamor to see again. Still, de Randamie, sensing the criticism, has offered Holm another shot. The UFC, which had Cyborg at ringside, is likely to want to push Cyborg going for the title if she’s cleared of wrongdoing by USADA. Cyborg tested positive for the diuretic pironolactone, which her side claimed she was taking for medical reasons related to her health problems from her last weight cut.

But even if Cyborg is cleared, the UFC will have a division with far less competition than any division the company has ever created. De Randamie weighed in at 143 pounds. Coming in that much under the weight usually means a fighter didn’t even have to cut weight, and it clearly means de Randamie is better suited for 135. Cyborg claimed to have weighed 169 pounds in the cage when she last fought at 140, the kind of a cut that explains her health issues. But if anything, having to cut to hit 145 means she’d likely be even larger next time. Sure, fighters have manipulated weight since the beginning of time to have size advantages in weight-class sports, but this is exactly what weight classes are designed to avoid from happening. And if Cyborg isn’t cleared, a division has been created with zero title contenders and nobody of substance who has an issue with already making 135.

But those decisions have already been made, and now we have to live with them.

The other controversial decision saw Anderson Silva win on all scorecards over Derek Brunson. Derek Cleary gave Silva rounds one and three. Eric Colon gave Silva all three rounds — a card that is really impossible to justify. Douglas Crosby gave Silva rounds two and three. Media scores were 83 percent for Brunson, but the stats were not as one-sided as the media scores would indicate. Brunson had a 20-8 first-round edge in significant strikes, and still lost that round inconceivably on two cards. Silva had a 10-9 edge in the second, and the third round was even 25-25.

Silva was clearly the star of the show to the live audience, a fighter fans have grown to love after his comeback from one of the sickest injuries in UFC history. In a company that often determines title fights based on what will draw, the reality is that nobody Michael Bisping could defend his middleweight title against would draw more pay-per-view buys than Silva. And while Bisping did win their first fight, Silva did hurt Bisping in that contest and came closer to finishing. It was also a thrilling fight that was close enough that you could see a rematch going either way.

But from a sports perspective, both Ronaldo “Jacare” Souza and Yoel Romero are long overdue for title fights in that division, to the point where it would be bad if one or the other doesn’t get the next shot, particularly when Dan Henderson was just given the last shot based more on sympathy and emotion rather than earning a top contender position.

Let’s look at how Fortunes Changed for Five Stars of the show.

HOLLY HOLM — If Cyborg isn’t cleared, Holm (10-3), almost by default, would be likely to face de Randamie (7-3) again. If de Randamie has surgery on her hand, which she indicated she would be needing after the fight Saturday, Holm would probably be the first person asked to face Cyborg, if Cyborg is cleared by USADA.

With three losses in a row, from her management’s side, it’s not a smart fight to go in against someone so much larger. But with those three losses, will her side feel they have the leverage to turn such a fight down?

For her, the fight that makes the most sense would be against Julianna Pena (8-3). It’s a battle of names, and a good enough win that it would rehab whoever wins back to being in the top mix at bantamweight, or, given the lack of contenders, a winner could also fight for the featherweight belt.

Even bigger, should Chris Weidman beat Gegard Mousasi on April 8 in Dallas, would be a third Silva vs. Weidman fight.

There is the argument that Silva, at 41, shouldn’t be taking on the killers of the division. But other than the top tier, there is no other Dan Henderson-type aging legend in the division past Vitor Belfort. Should Belfort beat Kelvin Gastelum on March 11 in Fortaleza, Brazil, that fight would make sense. It’s been done before, with Silva winning via knockout. Attempts by the UFC to rematch it in the past have never come to fruition.

DEREK BRUNSON — Brunson (16-5) is in a weird situation. Even though he lost, in all fairness he probably shouldn’t be booked like someone who has dropped positions on the ladder.

Had he won, he could have faced Rockhold, or the Weidman-Mousasi winner. But even though he lost, having him face the Belfort-Gastelum winner next would be a fair direction.

RONALDO JACARE SOUZA — Souza (24-4, 1 no contest) clearly deserves a middleweight title fight. He’s won ten of 11, dating back 5.5 years. Nearly every win has come via stoppage. His lone loss, to Romero, was a fight he could have easily won the decision in, or at worst, a fight that should have been a draw.

Bisping vs. Souza makes all the sense in the world, but most of the hype and talk has been in the direction of Bisping vs. Romero. For Bisping, there is probably no appreciable difference in marketability between the two. Romero did get his hand raised when they fought, but it was hardly a clear or convincing win.

Rockhold was originally scheduled as Souza’s opponent, and if Souza isn’t getting the title shot, running that fight back makes the sense, as would Weidman, provided Weidman wins against Mousasi. Souza has already beaten Mousasi. Anderson Silva would be a great fight for Souza’s career, but that fight is unlikely to happen given the relationship between the two. Souza could also choose to sit out, because if Bisping doesn’t face him, Souza had already more than earned a shot at the winner.

DUSTIN POIRIER — When it comes to excitement, the only saving grace on Saturday’s show was Poirier’s decision win over Jim Miller. Poirier (21-5) still has to rebound to overcome his loss to Michael Johnson in his prior fight. A good next opponent would be Michael Chiesa (14-2). Both are usually exciting fighters and have strong enough names that it could be a featured fight on any show. The winner would then be able to step up to the biggest names in the division.