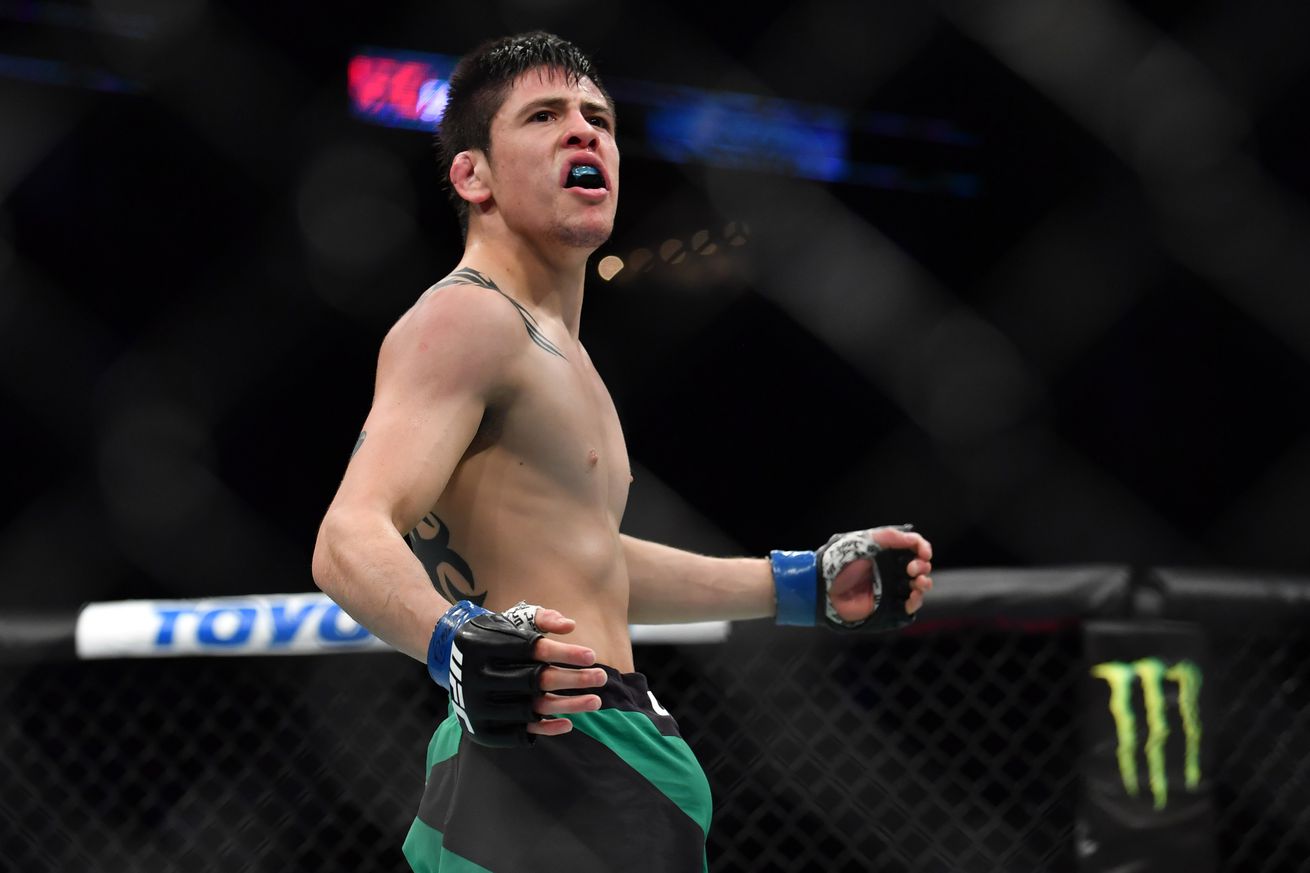 Less than one year ago, Brandon Moreno first appeared on UFC television as a cast member on The Ultimate Fighter tournament of champions.

He was one of 16 small-company flyweight champions brought in to see who would get a shot at Demetrious Johnson. In that first fight, as the champion of the World Fighting Federation, he lost via submission to Alexandre Pantoja in the first round.

Fast forward 10 months and the 23-year-old Moreno has upset two ranked opponents and is being talked about as a potential title contender.

A heavy underdog, Moreno shocked Louis Smolka with a first-round submission in his official UFC debut in October. He followed with a decision win over Ryan Benoit. On Saturday night in Nashville, he was being outgrappled by Dustin Ortiz, until a left high kick landed perfectly. Moreno got Ortiz’s back and choked him out.

Moreno is assuredly not a big enough name normally for a title challenger. Unfortunately for him, the Ortiz win came in prelims on FS2, meaning a far smaller audience saw him not just win a fight, but win over the crowd. He even won over his opponent, as before Moreno even got to speak, Ortiz took the mic and told the fans to give it up for Moreno. Moreno then vowed that he would be champion one day.

It’s clearly early for Moreno to be getting a title shot, but with Johnson turning away every challenge, Moreno ranks with Ray Borg as the top fighters in the division coming off a win who Johnson hasn’t already beaten handily.

Moreno has 11 straight wins dating back nearly five years, as his TUF loss doesn’t count on his record. Borg, who is also 23, is 5-2 in UFC with his biggest wins coming over Smolka, who he beat via decision, and Jussier Formiga. He also lost to Ortiz, who Moreno just beat. Moreno’s case is every bit as good as Borg’s, if not better.

Let’s look at what’s next and how Fortunes Changed for Five stars from Saturday.

CUB SWANSON – Swanson (25-7) came off one of the best fights in UFC history with his win over Doo Ho Choi on Dec. 10, and followed it up with a main event win over Artem Lobov, whose 14-13-1 record hardly looked main event worthy. Lobov, primarily a striker, was competitive with Swanson, and it turned into an exciting fight, even though Swanson won the last four rounds to take it.

After winning, Swanson immediately challenged the winner of the June 3 featherweight title fight with Jose Aldo defending against Max Holloway. Swanson has had a bad history with both. Aldo knocked him out in eight seconds back in 2009 with a flying knee. Holloway dominated him in 2015 in the fight that turned Holloway into a major title contender.

There are a lot of ways Swanson can go next. Should Yair Rodriguez (10-1) beat Frankie Edgar on May 13, Swanson vs. Rodriguez would make sense. Brian Ortega (11-0) would be another strong fight. As far as the title situation goes, should Aldo beat Holloway, it’s conceivable Swanson could get the shot, but it would be like if Moreno faced Demetrious Johnson in the sense nobody would think the title was in jeopardy. If Holloway wins, just because of how dominant Holloway was over him two years ago, that would be a tougher fight to make.

AL IAQUINTA – At 13-3-1, Iaquinta came off a two-year retirement to knock out a fading Diego Sanchez in just 98 seconds. Even though Iaquinta was talking like he was done as a fighter, and hadn’t fought in two years, he was still ranked in the top 15 coming into the Sanchez win.

The problem with looking at the fight is you don’t know if Iaquinta is that good or if Sanchez’s once great durability was beyond finished. It was a devastating win over a well-known fighter and Iaquinta couldn’t have looked better.

Edson Barboza (19-4) or Michael Johnson (17-11) would both make good next opponents, and on paper both would look to be exciting matches. Of course, Iaquinta is very much unpredictable, as with a regular job of selling real estate, it could be another long period before his next fight.

OVINCE SAINT PREUX – Saint Preux (20-10), with his win over Marcos Rogerio de Lima in the second round, looks to be moving up the ladder with the departure of Ryan Bader to Bellator and Anthony Johnson to retirement.

He’s still looking for that signature top name win, as he lost when matched with Jon Jones, Jimi Manuwa, Bader and Glover Teixeira over the past three years. He’s still a fighter on that level below the top tier in the division. Misha Cirkunov (13-2) is the best fit for an opponent for him right now, and Saint Preux has enough tenure and name value to be a strong opponent for Cirkunov.

JOHN DODSON – Dodson (20-8), defeated Eddie Wineland, but did so in a fashion that caused the crowd to boo both fighters heavily. Dodson does hold a knockout win over T.J. Dillashaw in the division, but a John Lineker loss is his holdback from a top match right now. A good next opponent would be the winner of the May 13 fight with debuting former WSOF champion Marlon Moraes (18-4-1) against Raphael Assuncao (14-5).

MIKE PERRY – Perry (10-1) put down Jake Ellenberger (31-13) with an elbow that caused one of the most devastating knockouts in recent memory.

Perry now has 10 knockout wins and one decision loss in his career. Perry’s power and aggressiveness makes him entertaining to watch almost every time out. Thiago Alves (22-11), coming off his win over Patrick Cote, would make for another good name opponent as a next test.