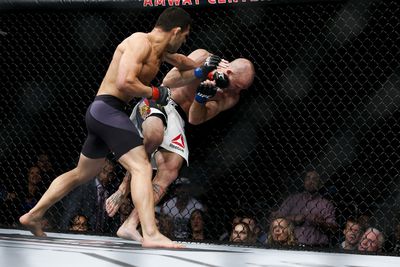 The quest for red panty night was clearly on every fighter’s mind when UFC presented its final show of the year on FOX this past Saturday night from Orlando, Fla.

In order, Charles Oliveira, Nate Diaz and Rafael dos Anjos all called out Conor McGregor, who coined the phrase that whoever gets him, it’s red panties night for their girlfriend because from a financial and career situation, it’s the closest thing in UFC to winning a lottery.

McGregor, 27, has the real potential to be the biggest drawing male fighter in company history, if he isn’t that already. He already turned the featherweight division, ruled since its inception by Jose Aldo, and made it one of the company’s top money weight class. He’s threatening to do the same to lightweights, a division that has only has a major drawing star once in its history – the heyday of B.J. Penn.

The three fighters followed on the heels of Max Holloway and Frankie Edgar a week earlier. A rematch with Aldo is also in the picture. With the dust settling on the top of both divisions, the big decision by McGregor and UFC over what will end up being one of 2016’s biggest fights should be made imminently.

The Diaz call-out got the most attention, live on FOX, even though his expletive-laden rant ended up being bleeped so much that for most people watching, what he said was left to the imagination. But that wasn’t the worst thing, as even when champion dos Anjos scored a first-round knockout. It was Diaz who was the most talked-about fighter of the night.

With all the names talking, it really should come down to dos Anjos, the lightweight champion, and ….View full article