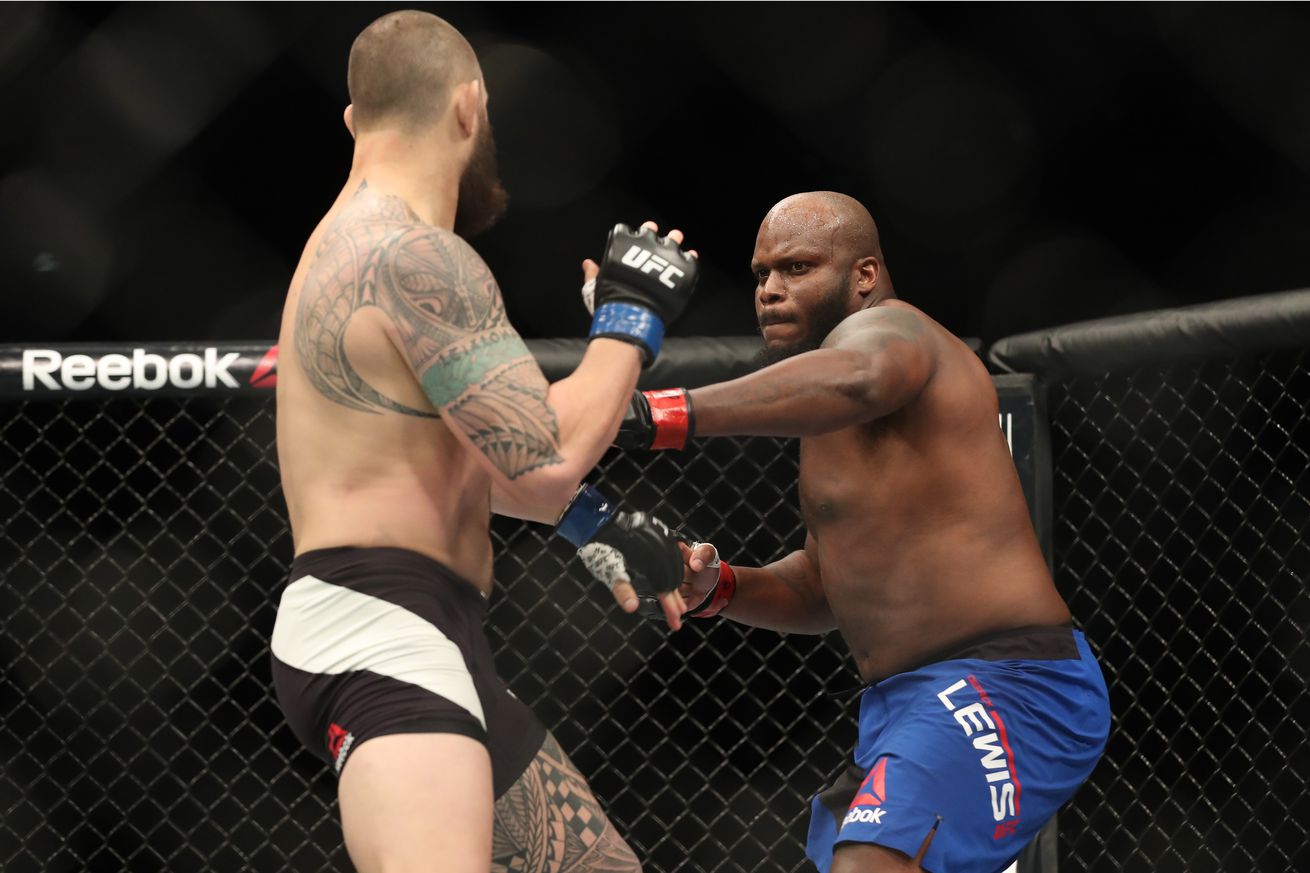 Derrick Lewis has been bouncing around the UFC’s heavyweight division for three years, often getting into trouble, but mostly winning.

He was one of the few good heavyweights who has to actually cut weight to make 265 pounds. A huge man, who had scary punching power, particularly when he’s on top of someone. But until Saturday night, he was a guy known for brutal finishes, but hardly someone who looked ready to break into the top tier or be a championship level fighter.

Lewis (18-4, 1 no-contest) finished Travis Browne, his highest-ranked win to date, in a fight it appeared at one point he was on the verge of losing. At 32, he’s got the UFC’s longest heavyweight winning streak with six, is the second-youngest top 10 heavyweight (Francis Ngannou is 30), and he’s becoming something of a personality.

When Lewis beat Shamil Abdurakhimov in his prior fight, even though he won via fourth-round knockout, he cited that his performance was terrible. After finishing Browne in the second round, he said a number of things that ended up making him the most talked about fighter on the show. He made a comment about Ronda Rousey’s “fine ass,” talked about having to do a No. 2 when he was holding his stomach in the first round, and said he was happy to deliver added punches after the fight should have been stopped.

He outright said Browne was a woman beater who lacked heart. Browne’s ex-wife accused him in 2015 of beating her. Browne was at first suspended by the UFC, until cleared by a company investigation. He also talked about needing a rest and not wanting to hear from the UFC about a future fight for at least three months. He claimed that all the training he’s been doing, and all the sex he’s been having, that his body needs some time off.

Winning streaks in the UFC are difficult enough, but in the heavyweight division, it’s even tougher. It’s often not about skill, but simply who lands the knockout blow first. Lewis may have got there first the last six times, but Matt Mitrione and Shawn Jordan have showed emphatically that the role can be reversed, as both hard hitters connected with Lewis and have been able to finish him.

Overall, the UFC rebounded off a lackluster UFC 208 show the week before, with a strong overall show in Halifax, N.S., Canada. There was a highlight reel moment with the Thiago Santos spinning wheel kick knockout of Jack Marshman, and questionable judging in a couple of spots, most notably a split-decision win by Randa Markos over former TUF rival Carla Esparza. Esparza looked like she was in complete disbelief when the final score was read in a fight where 79 percent of the media on MMADecisions.com scored it for Esparza.

Let’s look at how Fortunes Changed for Five of the stars of the show.

DERRICK LEWIS – Lewis didn’t say a name he wanted to face in the ring after the fight, but later threw out the name of Mark Hunt, another heavy hitter who has to cut to make 265. With Hunt (12-10-1, 1 no contest) facing Alistair Overeem (41-15, 1 no contest) at UFC 209, on March 4 in Las Vegas, should Hunt come out on top, that fights makes sense.

If Hunt doesn’t win, Lewis vs. Overeem would be the right fight to make. A seventh straight win against either of those should put Lewis into legitimate championship contention. Another possible opponent is Ngannou (10-1). The argument there is if Lewis faces Ngannou, you at least build a fresh new and younger title contender. With Hunt and Overeem, Hunt is coming off a loss that was changed to a no-contest with Brock Lesnar, and Overeem was finished in his previous fight by current champion Stipe Miocic in the first round. Should either of them beat Lewis, he’s knocked out of the contender ranks and you may not make a new contender out of it. With Ngannou, there is no such issue, and a winner of that match should be in line for a shot.

JOHNY HENDRICKS – Hendricks (18-6) went on the verge of quitting to now taking about how much energy he had in moving up to middleweight, seemingly eliminating his weight-cutting issues.

The problem with Hendricks at middleweight is that he’s so much smaller than most fighters in that division. It’s one thing to win a competitive fight with Hector Lombard, himself a short and very muscular middleweight. It’s another when you look at the horizon in that division and see names like Luke Rockhold, Yoel Romero and Chris Weidman, who are just naturally so much larger than he is

The next test he should be Robert Whittaker (17-4), a ranked fighter who had won five straight as a middleweight, but like Hendricks, he’s on the smaller side for the division.

GAVIN TUCKER – Tucker (10-0), a featherweight from Halifax, got the biggest crowd reaction of the night in being too quick and technical for Sam Sicilia (15-8). It was Tucker’s UFC debut.

Stylistically, two opponents that should provide an exciting fight with him, as well as a real test would be Doo Ho Choi (14-2) and Jason Knight (16-2). Even if Tucker doesn’t win, even a good showing in defeat in a great match will build his name. A win over either of those names would start putting him on everyone’s radar as far as somebody to watch.

Right now there isn’t a long list of contenders for that title with Ronda Rousey and Miesha Tate both having retired. McMann lost to Nunes in 2015 in the first round, so if Nunes were to win, Raquel Pennington (9-5) may make more sense as a contender, particularly since Pennington beat former champion Tate, a bigger win than any McMann has done to date.

McMann could also be matched with Holly Holm (10-3) with the idea of Olympic silver medal winning wrestler taking on a former boxing and MMA champion.