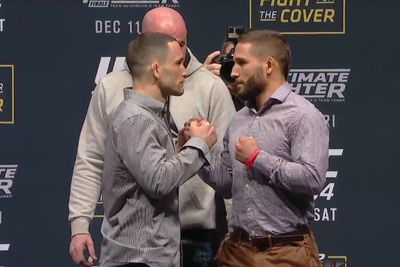 “The Answer” came face-to-face with “Money” at the conclusion of Wednesday’s joint press conference, featuring the cast and crew of the UFC 194: “Aldo vs. McGregor” pay-per-view (PPV) event on Saturday night (Dec. 12, 2015), also in “Sin City.”

It’s a risky fight for Edgar (19-4-1), who won four straight after coming up short in his bid to become featherweight champion at UFC 156, but he doesn’t have much choice. Reigning division kingpin Jose Aldo is already booked to settle his score with interim titleholder Conor McGregor on Saturday.

“Money” (17-3) was defeated by the aforementioned Irishman back in July, but appears to be getting a free pass after taking the fight on just two weeks notice. Outside of UFC 189 — and a pair of losses to “Junior” — Mendes has pretty much ruled ….View original article