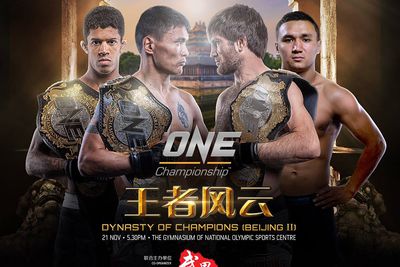 ONE: “Dynasty of Champions” is set for Beijing this Saturday night (local time) and the full fight card was recently released for an event which will see Narantungalag Jadambaa face Marat Gafurov in a featherweight unification match and Adriano Moraes defend his flyweight title against Kairat Akhmetov.

In total there will be nine fights on the card, including the final of the four man, one night 145-pound tournament. Two welterweight matchups were revealed today with Jeff Huang returning to the ONE cage to rematch Trestle Tan and Nikolay Aleksakhiin going up against Burenzorig Batmunkh in a battle of promotional debutants.

Huang (5-2) saw a four fight winning streak surprisingly snapped by Tan (3-4) who knocked him out in front of his hometown fans at an event in Taipei earlier this year. The Taiwanese welterweight will be out for revenge while, for the Filipino, this represents the biggest opportunity of his career to date.

Aleksakhin (16-3) has won titles with ProFC and S-70 in Russia and comes from a Combat Sambo background. That should make for an interesting clash of styles when he takes on Mongolian kickboxer Batmunkh (3-1) who coincidentally has a 2010 loss to Jadambaa on his record.