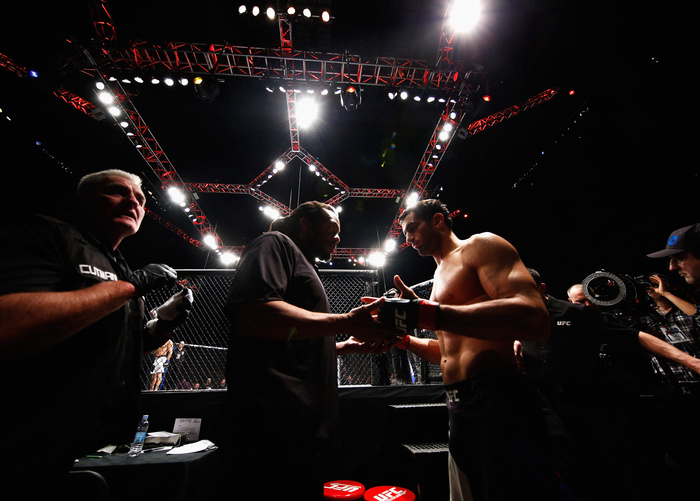 Gegard Mousasi got back to winning ways on Saturday night with a decision win which was as dominating as it was disciplined.

It wasn’t exactly the crowd pleaser everyone at the O2 Arena had hoped for on Saturday night. But, it was impressive to see how Mousasi handled a tough opponent in Thales Leites: a man who is a difficult proposition for the vast majority of the UFC’s middleweight division.

You could say the controlled performance from Mousasi—which saw most of his offense come from strikes in dominant positions on the ground—was somewhat reminiscent of the Dutchman’s regular disposition. Stoic, poised and measured: Mousasi doesn’t often make for the most interesting interview, but you will still listen intently.

Mousasi’s usual demeanour is often at odds with his fighting style: his high-level kickboxing skills and slick ground game do not seem to marry up with the character we see in interviews and press conferences like the dissonance between musical notes that are out of sync.

This time around, there was another sense of discord between the man’s personality and his performance in the Octagon, though in reverse. Mousasi fought a sensible fight—which wasn’t surprising having suffered the discomfiture of being at the receiving end of the combination of a spinning back kick and the flying knee of Uriah Hall, losing by TKO in his last outing—but, was noticeably passionate and engaging in the post-fight interview and in the press conference following.

When asked about the reaction to his fight against Leites, Mousasi said: “I dominated him; I think Michael Bisping had a very difficult fight with him. I didn’t have any difficulties with him. Last fight, I took chances and I paid for that.”

“I could have gone and taken unnecessary chances and lose because I want to please the crowd. They don’t ….View full article