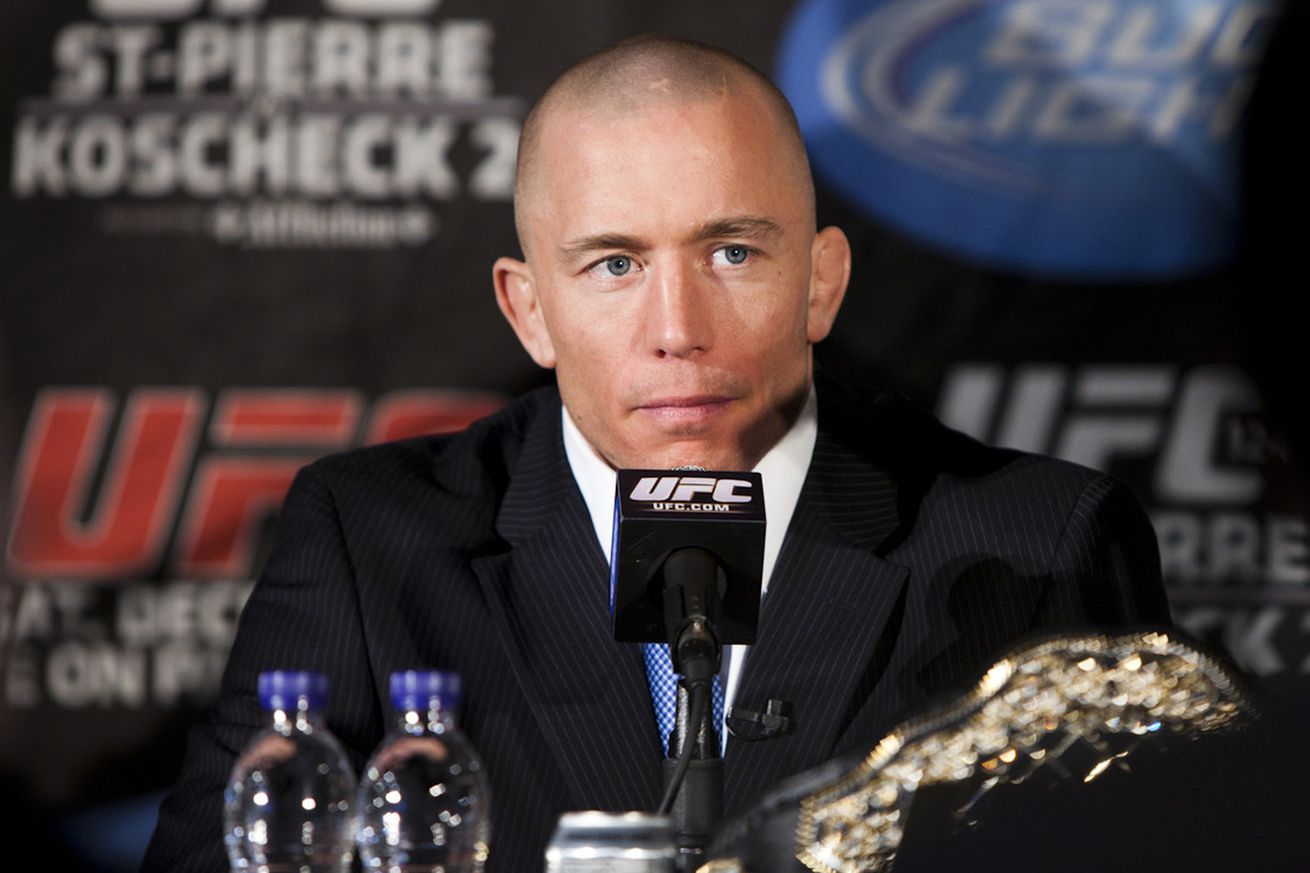 Ever since his comeback fight against Michael Bisping was first unveiled in March, Georges St-Pierre made it clear that he would need until late 2017 to prepare. St-Pierre maintained that assertion throughout several attempts by the UFC and Bisping to coax St-Pierre into a summer showdown, and the former welterweight champion revealed last week that an eye injury was the culprit for his delay.

St-Pierre claimed the UFC knew about his injury ahead of time, meaning the promotion and Bisping put public pressure on him to fight in July even though both entities knew a summer date wasn’t a realistic option. And now, with increasing negativity surrounding the Bisping matchup — which itself was thrust into limbo when UFC president Dana White publicly declared the UFC was moving on — St-Pierre said he basically felt forced to reveal an injury that he never actually planned on discussing.

“When the fight got announced with the press conference, we knew that we couldn’t fight in the summer. UFC knew as well that I couldn’t fight in the summer,” St-Pierre explained Monday on The MMA Hour. “They knew that I had an eye injury, but we still did the press conference, and I felt very uncomfortable during this whole time.

“It’s an eye injury, and it’s a long healing process. I had surgery done and everything is OK. It’s just, there’s a lapse of time, minimum time, that I need to wait before I go back and train, especially if I take a risk to get hit on my eyes, because it can damage (my eye permanently), because my vision has not recovered 100 percent yet. It will be fine, everything is fine. It’s just, I need to wait for the lapse of time that the doctor asked me to wait for, and it’s in September that I can start sparring again.”

St-Pierre said the UFC knew about all of this ahead of time, even as the organization pushed forward with an announcement press conference in Las Vegas — all of which makes it more confusing for St-Pierre as to why a late-2017 timetable to challenge Bisping became a major sticking point for the UFC in recent weeks.

“I don’t know,” St-Pierre said. “Maybe it’s contract, contractual reasons? I have no idea. Even my agent and I were not very excited about that (press conference). We were like, ‘it’s better if we wait a little bit,’ but they decided to do it. It was the first time, if you remember, that they announced a fight — I think it’s the first time in history they announced a fight without a date. That’s for that reason, because they couldn’t put a date yet because we didn’t know. I didn’t know when I would be able to spar. I knew the fight would definitely not happen in the summer.”

St-Pierre, 36, is widely considered to be the greatest welterweight to ever compete in mixed martial arts. The legendary Canadian is a two-time UFC champion who racked up a division-record nine consecutive title defenses during his second reign before exiting the sport in 2013 following a close win over Johny Hendricks.

St-Pierre first announced intentions to return to the sport in June 2016, however he didn’t officially re-sign with the UFC until Feb. 2017 due to stalled contract negotiations. And now, with the Bisping fight being made uncertain, St-Pierre admitted to being frustrated by the whole situation.

“It was frustrating,” St-Pierre said. “Because first, the negotiation took a long time, to the point that at one point I almost lost hope. Then when we agreed, we agreed on everything. We agreed on the opponent and everything, we shook hands and we signed and we agreed on everything for the contract, I was very happy. Unfortunately when this happened, in parallel, I had the bad luck that happened to me with my eyes, so I needed to get surgery done, so it’s just bad luck happening at the wrong time and it sucks. But I believe it’s for a good reason. It’s an eye. You really don’t want to play with your eye. You don’t want to be blind. Health has always been my first priority.”

Bisping, too, is expected to be sidelined with a lingering knee injury until late 2017. That recent revelation led the UFC to announce an interim middleweight title fight between Yoel Romero and Robert Whittaker for July 8 at UFC 213.

St-Pierre, meanwhile, said he hasn’t personally heard anything from the UFC regarding his next step outside of what he reads online.

“Just what I’ve heard in the news,” St-Pierre said. “But Dana, he’s a very emotional person. He’s a very emotional person, and I understand that. You need to be emotional in this game. The way he is, Dana is the best. Like I said, he’s the best promoter, pound-for-pound, of all-time, and he can sell you every fight. It’s crazy. He’s the best. He can sell you anything, like, he’s so good at it. And I’m sure if he still wants to make this fight, we can make it. It’s up to him.

“Things with Dana are hard,” St-Pierre added. “I have people that their job is public relations and they deal with the UFC people, and sometimes all the stuff that I hear from Dana is from the reporters. Stuff that I hear, all the time, are [from] the reporters. It explodes like a bomb that I didn’t know. So I guess it’s the same thing for him on this fight.”

Because of his recovery timetable, St-Pierre said he’s targeting November as the earliest possible date for his return.

Given that Bisping is eyeing a similar timetable and both men still want to fight each other, St-Pierre said he hopes the UFC sticks with its original plan. But that being said, he isn’t ultimately sure how things are going to work out.

“This whole thing is a freakin’ game. That’s how it is, man,” St-Pierre said. “This is business. Fighting now — I started doing it, it was fun, then it was competition. Now it’s for business and that’s how people should treat it.